The radiofrequency (RF) ablation devices market revenue stood at $3,173.5 million in 2019, and it is expected to advance at a 12.6% CAGR during 2020–2030. The strongest growth drivers for this market include the booming geriatric population, surging healthcare expenditure, rising prevalence of chronic diseases, and technological advancements.

However, the ongoing coronavirus pandemic has had a negative impact on the market due to the sudden shift in the focus toward COVID-19 treatment. As a result, this pandemic has resulted in a delay and suspension of the treatments of several other diseases. 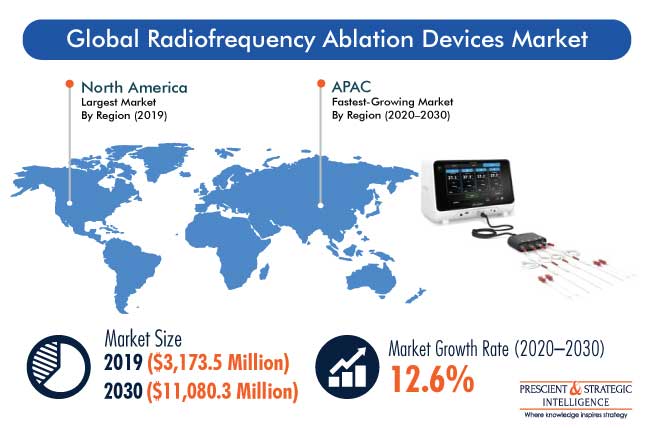 The catheter systems category, under the component segment, is expected to register the fastest growth in the market for RF ablation devices in the coming years. These systems comprise electrodes, probes, and catheters that are inserted into the affected body parts for ablation procedures. This market growth can be owed to the surging prevalence of chronic diseases resulting in a large number of RF ablation treatments.

The hospital category, within the end user segment, accounted for the largest share in 2019 due to the wide adoption of RF ablation systems at hospitals. These healthcare settings are preferred choice of people for the diagnosis and treatment of diseases because they offer the best-possible service.

The pain management category, under segmentation by application, is expected to demonstrate the fastest RF ablation devices market growth in the future. This will be due to the increasing incidence of chronic pain and burgeoning demand for minimally invasive procedures being witnessed by healthcare facilities. The cost-effectiveness and soaring awareness about RF ablation treatments for pain relief will also contribute to the growth of this category worldwide.

North America generated the highest revenue in 2019, and it is expected to continue its dominance between 2020 and 2030. The RF ablation devices industry in this region is dominated by the U.S. due to the presence of a wide installation base for such devices in the country. Besides, the presence of research institutes and private healthcare providers that are increasingly using RF ablation equipment will boost the market growth in the region.

The APAC region is expected to record the fastest growth due to the presence of a large population of the elderly, who are more susceptible to chronic diseases. For example, the World Population Ageing 2019 report states that there were 395.3 million people aged 65 years or above in Asia in 2019, and the number is expected to reach 954.7 million by 2050. Thus, the growing population of the elderly will propel the prevalence of numerous chronic diseases, which will further drive the RF ablation devices market, by amplifying the requirement for minimally invasive procedures. Moreover, the heavy investments by the leading companies in the developing nations of APAC are expected to drive the adoption of RF ablation procedures in the region.

Key market players are focusing on acquiring others to increase their market share and expand their presence around the world. For example, in January 2019, Medtronic Plc announced its plan to acquire Epix Therapeutics Inc., a private medical device company, which creates catheter-based temperature-controlled cardiac ablation devices. Through this acquisition, the former widened its ablation device portfolio, and it is now providing advanced tools to physicians to treat cardiac arrhythmias.

Patients are increasingly opting for minimally invasive treatments for several diseases, as this approach causes less pain and scarring and minimizes the chances of infections related to open surgeries. For example, an individual with back pain, who is not getting relief from physiotherapy or medication, can undergo RF ablation to remove the nerve fibers in the spinal cord, so the pain signals do not reach the brain. Hence, the lower risk of complications offered by this treatment mode has supported the adoption of RF ablation equipment globally.

Another key driver for the RF ablation devices market is the soaring elderly population, as it is highly prone to disorders and abnormalities. Owing to their weak immune system, older people require minimally invasive treatments for several chronic diseases, such as cancer and cardiovascular diseases (CVDs). According to the UN World Population Ageing 2019 report, the population of individuals aged 65 years or above was 703 million in 2019, and it is estimated to reach 1.5 billion by 2050.

In recent years, players in the radiofrequency ablation devices industry have pursued product approvals and mergers & acquisitions in order to stay ahead of their competitors. For instance:

Frequently Asked Questions About This Report
What is the future of the radiofrequency ablation devices market?+

The radiofrequency ablation devices market will reach $11,080.3 million by 2030.

Who are the highest-revenue-generating end users in the radiofrequency ablation devices industry?+

Which is the most lucrative region for investing in the radiofrequency ablation devices market?+

What are the major drivers for the radiofrequency ablation devices industry?+

Which strategic move characterizes the competition in the radiofrequency ablation devices market?+