The catheter market value was $14.3 billion in 2019, and the market is predicted to progress at a CAGR of 8.8% between 2020 and 2030. The increasing demand for surgical procedures, burgeoning requirement for interventional radiology procedures, rising menace of chronic diseases, booming geriatric population, and surging number of product launches are the main factors driving the expansion of the market. 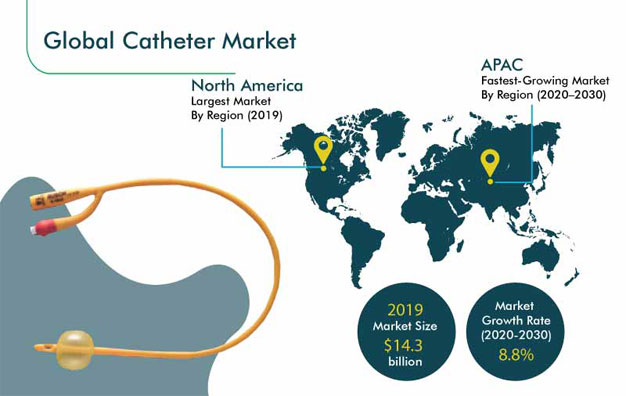 The cardiovascular category held the largest share in the market for catheters in 2019, under the type segment. This was primarily because of the high incidence of cardiovascular diseases (CVDs) all over the world and extensive usage of catheters for diagnosing and treating them. As per the World Health Organization (WHO), CVDs are the primary cause of death, killing nearly 17.9 million people every year. Among the various CVDs, coronary artery disease (CAD) is one of the primary causes of mortality and morbidity in both developed and low- and middle-income countries.

Pigtail Predicted To Exhibit Fastest Growth in Market in Future

The pigtail division had the largest share in 2019. This category is also predicted to exhibit the fastest growth in the catheter market in the future on account of the fact that pigtail-shaped catheters are more flexible, cause less trauma, are smaller in size, and can be more-easily inserted for diagnosing and treating blockages in the blood vessels than the other catheters. Additionally, the variant’s low complication rate is propelling its adoption in healthcare settings.

Hospitals and ASCs contributed the highest revenue to the market for catheters in 2019, and this end user category is predicted to hold the largest share in the coming years as well. This is ascribed to the surging number of hospitalized people, growing incidence of chronic diseases, and increasing number of such healthcare centers all over the world. Additionally, the provision of advanced support and care to patients under the supervision of experienced and trained medical practitioners at these places makes them the preferred choice of patients.

North America was the largest user of catheters across the globe in 2019 because of the high incidence of chronic diseases, huge healthcare spending, launch of several initiatives by private and public organizations for raising public awareness about the benefits of catheters, surging population of geriatric people, and existence of leading catheter market players in the region.

Furthermore, various regional governments are enacting policies for promoting the usage of catheters. For example, the Centers for Disease Control and Prevention (CDC) and the Canadian government are helping healthcare centers improve catheterization practices. As per an article produced in the British Medical Journal (BMJ) in January 2020, in Canada and the U.S., the excessive use of urinary catheters is a growing concern. Thus, to ensure the judicious use of catheters, guidelines have been published by the CDC that clearly defined inappropriate and appropriate catheterization practices.

The existence of several leading players is one of the major factors driving the advance of the catheter industry in APAC. These industry players are increasingly focusing on strategic activities for strengthening their market position. For example, a broad strategic collaboration was announced between Osypka AG and Stereotaxis Inc. in May 2019 for designing and developing a next-generation magnetic ablation catheter, which will be navigated with the help of the robotic technology developed by Stereotaxis.

Besides the aforementioned factor, the presence of a rapidly improving healthcare infrastructure is fueling the expansion of the catheter market in the APAC region. Countries here are rapidly developing hospitals for meeting the soaring medical requirements of patients. For example, the number of hospitals in China increased from 16,318 in 2000 to 33,009 in 2018.

The COVID-19 pandemic has boosted the advance of the market. This is primarily because people suffering from chronic conditions have weak immunity and are, therefore, at an increased risk of catching the virus. Moreover, after understanding the effects of the pandemic, several cardiology societies have laid down guidelines, including the necessary steps and measures to take in cardiac catheterization laboratories for ensuring the safety of both hospital personnel and patients. Because of the pandemic, the sales of catheters boomed around the world, thereby fueling revenue generation for the providers of such products. 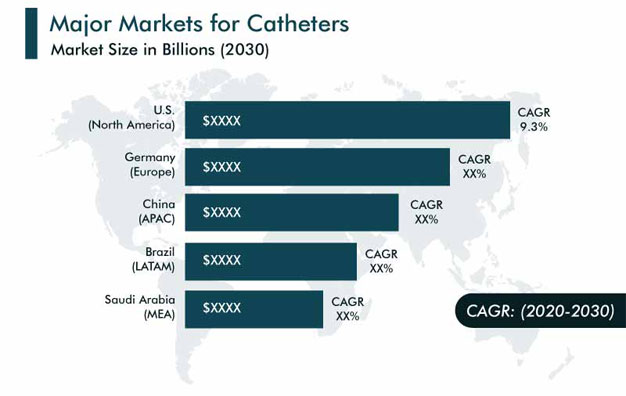 One of the major industry trends is the soaring number of product launches around the world. For example, Medtronic plc penetrated the guide extension catheter domain in May 2019 with its telescope guide extension catheter, which is used for providing additional backup support and access to distal lesions. Similarly, the Infyna Chic intermittent catheter was launched by Hollister Incorporated, another key catheter market player, in February 2019 for providing women catheter users with a high discretion level. Furthermore, this product was CE-approved in December 2018. 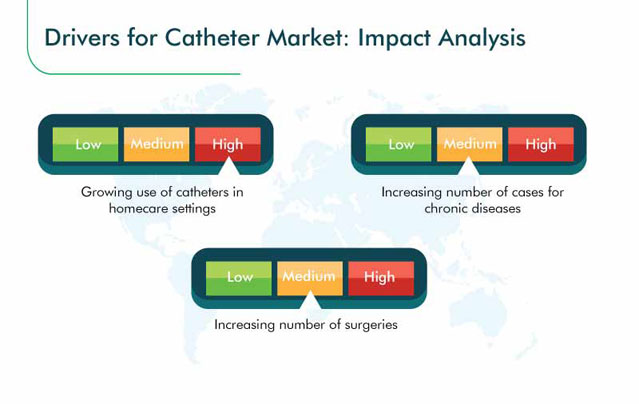 The growing usage of intravenous and urological catheters in homecare settings, mainly on account of the surging population of geriatric people, is one of the major growth drivers market. As geriatric people require regular monitoring and administration of medicines, their booming population is positively impacting the demand for catheters. Furthermore, elderly people have weak urinary bladders and, they are, therefore, highly vulnerable to urinary tract infections (UTIs). Because of these reasons, catheters are being extensively used in the homes of patients.

The other major factor driving the progress of the industry is the growing incidence of chronic diseases, such as cancer, neurological diseases, cardiovascular diseases (CVDs), and autoimmune diseases. For example, the Global Cancer Observatory (GLOBOCAN) says that across the world, the third major cause of cancer deaths in 2018 was gastric cancer. The total number of deaths caused due to gastric cancer, globally, grew from 723,000 in 2012 to 783,000 in 2018. Similarly, as per the American Heart Association (AHA), CVDs claimed the lives of over 17.6 million people in 2016, and this number is predicted to grow to 23.6 million by 2030.

In recent years, players in the industry have engaged in strategic developments, such as partnerships and mergers & acquisitions, in order to stay ahead of their competitors. For instance:

Some of the Key Players in the Catheter Market Include:

The catheter market report offers comprehensive market segmentation analysis along with market estimation for the period 2014–2030.

Frequently Asked Questions About This Report
What is the expected CAGR in the catheter market during 2020—2030?+

What are the key factors driving the progress of the catheter industry?+

The surging number of surgeries, soaring geriatric population, and mushrooming frequency of product launches are the key growth drivers for the catheter industry.

Which type of catheters are predicted to dominate the catheter market in the coming years?+

Cardiovascular catheters are expected to register the highest sales in the catheter market during 2020–2030.

Which will be the biggest end user in the catheter industry between 2020 and 2030?+

Hospitals and ambulatory surgical centers (ASCs) will be the largest end users in the catheter industry from 2020 to 2030.

Why is the catheter market fragmented?+

The catheter market is fragmented due to the presence of a large number of players.