The global psoriasis drugs market was valued at $14,504.0 million in 2020, which is projected to progress at a CAGR of 14.0% during the forecast period (2021–2030). The major factors responsible for the growth of the market include the rapidly aging population, increasing number of patients with psoriasis, rising per capita income, escalating healthcare expenditure, and surging number of research programs.

With the COVID-19 pandemic’s outbreak, the burden of both morbidity and mortality increased exponentially, leading to major disruptions in the economic, social, and other aspects of life. In addition, the major burden fell on the healthcare sector and related infrastructure, even in the most-developed countries with advanced healthcare systems. However, the COVID-19 pandemic has not affected the market for psoriasis drugs much due to the recent launch of some major drugs and their increased sales. 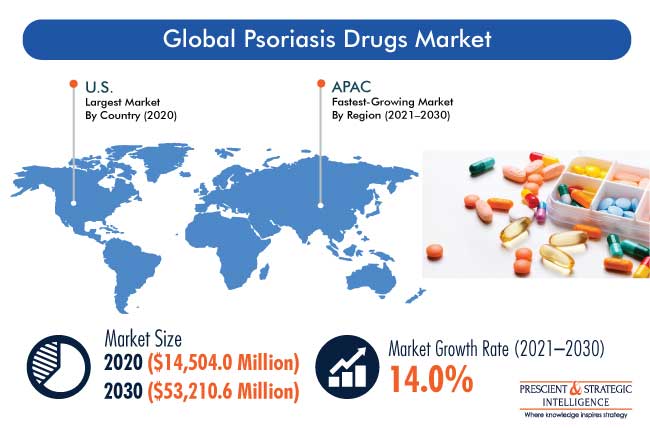 Based on type, the biologic drugs category held the largest share in the psoriasis drugs market during the historical period (2015–2020), and it is expected to retain its position in the upcoming years. This will majorly be due to the rising number of psoriasis patients across the globe. Moreover, the increasing number of research programs to decode the genetics of psoriasis has led to the development of highly targeted and effective drugs. Thus, the availability of an improved treatment to clear psoriasis and reduce the risk of its comorbidities, including psoriatic arthritis (PsA), inflammatory bowel disease (IBD), and certain cancers, has allowed biologic drugs to gain a large customer base.

On the basis of mechanism of action (MoA), interleukin inhibitors are expected to be the fastest-growing category in the psoriasis drugs market during the forecast period. This is majorly attributed to the increasing adoption of these drugs for the treatment of psoriasis and growing prevalence of autoimmune conditions.

Due to Availability of large Number of Brands, Parenteral Category Led Market

On the basis of route of administration (RoA), the parenteral category held the largest share in the psoriasis drugs industry during the historical period. This was due to the rising adoption of biologic drugs to be delivered intravenously. Furthermore, the rise in the preference for parenteral administration is due to the large number of brands available for injection and overall rise in the rate of psoriasis.

The North American region accounted for the largest share in the psoriasis drugs market during the historical period in the psoriasis drugs industry. This was majorly due to the increasing awareness on newly developed drugs and high per capita income in the region. However, Asia-Pacific (APAC) is expected to be the fastest-growing region in the forecast period. This is attributed to the increase in the disposable income, which is leading to the high adoption of skincare products, such as psoriasis drugs, surge in the healthcare spending, and growth in the number of product launches in the region. 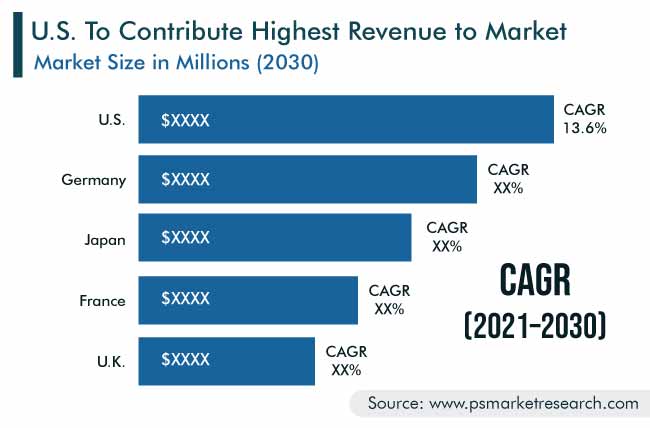 The increasing number of drug approvals is a notable trend being observed in the market for psoriasis drugs. The expansion of the drug portfolio for the disease is expected to attract more patients and healthcare professionals. For instance, in January 2021, AbbVie Inc. announced that the European Commission (EC) has approved RINVOQ (upadacitinib - 15 mg), an oral, once-daily selective and reversible Janus kinase (JAK) inhibitor developed for the treatment of active PsA in adult patients. 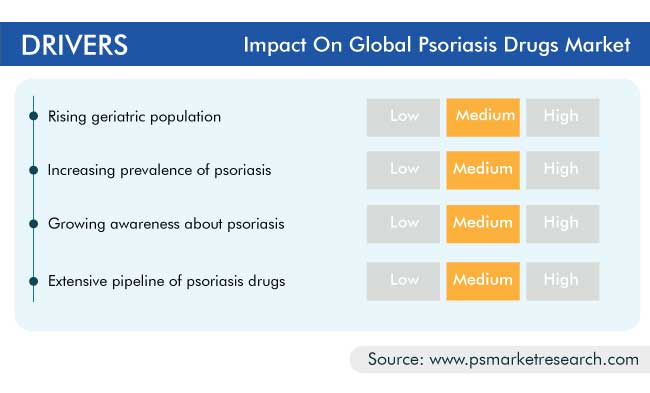 The functionality of the human skin decreases with age, bringing with it various problems, such as slow healing of wounds, loss of subcutaneous fat, increased sensitivity to ultraviolet (UV) radiation, and greater susceptibility to skin infections and diseases, such as psoriasis. According to the World Population Ageing 2019 report by the United Nations (UN), there were 703 million people aged 65 or above in 2019, and their number is set to increase to 1.5 billion by 2050. Thus, the rising geriatric population is one of the key factors driving the market for psoriasis drugs, by resulting in the increasing number of cases and, in turn, the demand for the associated medication.

According to the National Psoriasis Foundation, 125 million people across the world were reported to have psoriasis, as of 2020, which is significantly higher compared to the disease prevalence reported in the year 2016, which was approximately 100 million. Thus, the increasing prevalence of psoriasis is resulting in the high demand for the related treatments and drugs, which, in turn, is driving the psoriasis drugs industry growth.

In recent years, players in the psoriasis drugs industry have engaged in product launches to offer a better portfolio than their competitors.

Based on Mechanism of Action (MoA)

Based on Route of Administration (RoA)

Frequently Asked Questions About This Report
What will be the future psoriasis drugs market size?+

What type of drugs are the most popular in the psoriasis drugs industry?+

Under the type segment of the psoriasis drugs industry, the biologic drugs category holds the largest share.

Why are interleukin inhibitors becoming popular in the market for psoriasis drugs?+

The demand for interleukin inhibitors is rising among the end users in the psoriasis drugs market because of the increasing incidence of autoimmune diseases.

APAC is set to offer the best opportunities for investments in the psoriasis drugs industry.

What are players in the psoriasis drugs market doing for business growth?+

Companies in the market for psoriasis drugs are launching new medications and seeking the approval of regulatory agencies for the same.