The global off-highway electric vehicles market size was estimated at $16,908.6 million in 2021, and it will advance at a CAGR of 21.5% during 2021–2030, primarily due to the rising demand for low-noise and emission-free machines.

The adoption of EVs is growing at a fast pace all over the world, and traditional automobiles are being phased out in an increasing number of countries. China, the European Union, and the U.S. collectively account for over 90% of the global EV sales; while Costa Rica and Colombia have lately established much-more-robust EV sales objectives. General Motors, BMW Group, Volkswagen AG, AB Volvo, Nissan, and Audi, among others, have vowed to invest a total of $150 billion in EV manufacturing and announced intentions to debut new EV models in the 2020s. 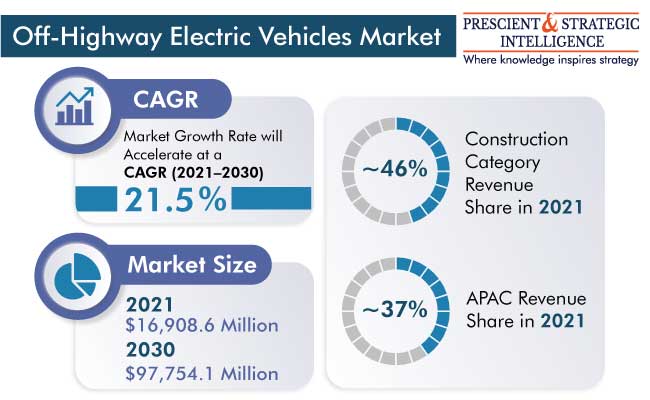 EVs are quiet, thus ideal for operation in densely populated regions, particularly in projects requiring midnight operations or operating in residential areas. Hence, digging or moving material from a house, school zone, or hospital becomes easier. For instance, where it used to take multiple laborers with smaller electric tools, an electric compact excavator or an electric loader can now dig or carry material indoors without polluting confined environments or causing substantial interruptions.

In 2021, construction applications accounted for over 46% of the revenue share. The utilizes equipment such as electric loaders and electric excavators. The rapid urbanization is leading to the increasing demand for houses, thus propelling residential development across the globe. Additionally, electric machines can be easily used in indoor settings as they do not pose a ventilation problem, unlike ICE vehicles. Indoor projects can now benefit from the low noise and zero emission levels provided by electrically propelled construction equipment. 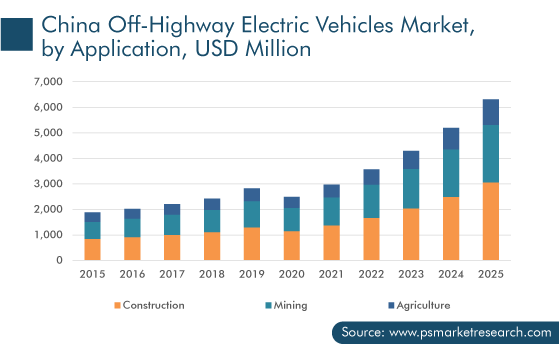 In 2021, the HEV category dominated the market with more than 36% volume share. These types of vehicles are intended to enhance the use of the internal combustion engine by connecting it to an electric powertrain. Due to the stringent emission regulations imposed by government agencies, such as the European Commission and the U.S. EPA, the demand for hybrid-propulsion off-highway equipment is growing and driving manufacturers to develop more-environment-friendly off-road vehicles. Since 2017, off-highway vehicle manufacturers have been adopting a hybrid engine, a combination of the diesel–electric propulsion system. 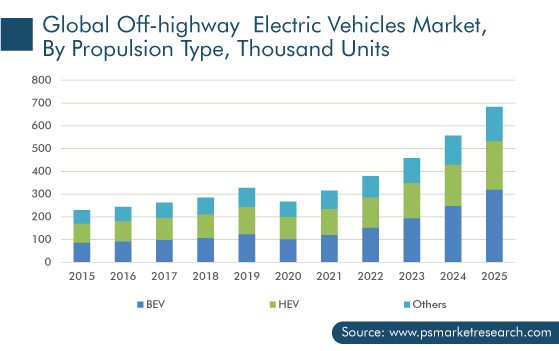 In 2021, APAC held the major revenue share, of around 37%, in the market. This was due to China being a key manufacturer of construction machinery owing to the presence of several OEMs, including Sany Heavy Equipment International Holdings Company Limited, Toyota Industries Corporation, Northern Heavy Industries Group Co. Ltd., Komatsu Ltd., and Hitachi Ltd.; low raw material and labor costs, and availability of superior facilities.

Moreover, China has the largest off-highway electric vehicles market share in APAC owing to its position as the world leader in the electrification of on- and off-highway vehicles, as well as the abundance of charging infrastructure and easy availability of aftermarket services. The Chinese government's support for infrastructure projects, as well as the rising demand for electric trucks in Japan and South Korea, is an important market driver in the region.

Infrastructure is the backbone of economic development. All kinds of construction equipment emit substantial levels of GHGs, which spread across large distances. To make matters worse, various activities, such as land clearing, demolition, burning, and working with toxic materials, contribute to air pollution.

According to the WHO, every year, an estimated 7 million people die as a result of air pollution around the world. As a result, by 2030, Ireland, Norway, and the Netherlands will all have banned the sale of gas and diesel automobiles. Over the next two decades, several additional countries will impose or seek to impose similar prohibitions.

Globally, infrastructure development activities are responsible for 11% of the energy-related carbon emissions, so countries will, at some point, ban the sale of heavy equipment with diesel engines. The benefits of all-electric heavy equipment include reduced noise, zero emissions, reduced service time, and a lower total cost of ownership.

Moreover, prolonged exposure to loud noises can cause temporary or permanent hearing loss, or tinnitus. It is estimated that over 500,000 contractors in the U.S. are exposed to dangerous levels of noise on a daily basis. Further, the noise impacts those who live and work around the construction sites.

The major trend being observed in the market is that the major companies are involved in product launches in order to stay ahead of their competitors. For instance:

Based on Energy Storage Type

Based on Energy Storage Capacity

Frequently Asked Questions About This Report
What will be the electric off-highway vehicles market CAGR during 2021–2030?+

Which is the largest application in the electric off-highway vehicles industry?+

The application segment of the electric off-highway vehicles industry is led by the construction category.

Why does APAC dominate the electric off-highway vehicles market?+

APAC is the largest market for electric off-highway vehicles because of its booming construction industry, stringent emission regulations, and incentives on the purchase of EVs.

What are the key electric off-highway vehicles industry growth drivers?+

The key driver for the electric off-highway vehicles industry is the increasing demand for low-emission and -noise machines.

Which is the strongest strategic measure in the electric off-highway vehicles market?+

The players in the market for electric off-highway vehicles are launching newer models of low-emission construction, mining, and agricultural machines.