The growth can be ascribed to the increasing prevalence of chromosomal abnormalities and rising demand for early detection methods. Approximately, 14% of the stillbirths are due to inherited diseases in pregnant women in the age group of <24 years, and the number rises to 38% in women 40–44 years of age.

Among all the genetic abnormalities, Trisomy 21 holds the largest share. Its annual prevalence is 1 in 800 newborns, which makes it the most-common chromosomal abnormality in the U.S. In absolute terms, in the U.S., more than 5,000 babies are born with Down syndrome (Trisomy 21) every year.

Down syndrome increases in likelihood as the mother ages, and most of the times, babies born with it weigh even less than 1,500 grams, which is way less than the weight of a normal infant. Moreover, approximately 85% of the individuals born with this condition die within a year, and only 50% live longer than 50 years.

Moreover, in the U.S., about 1 in 5,000 newborns have Trisomy 18, and approximately 1 in 16,000 have Trisomy 13. In the same way, the prevalence of sex chromosome disorders is about 1 in 2,000, and these conditions are brought about by various environmental factors, including UV radiation and smoking. 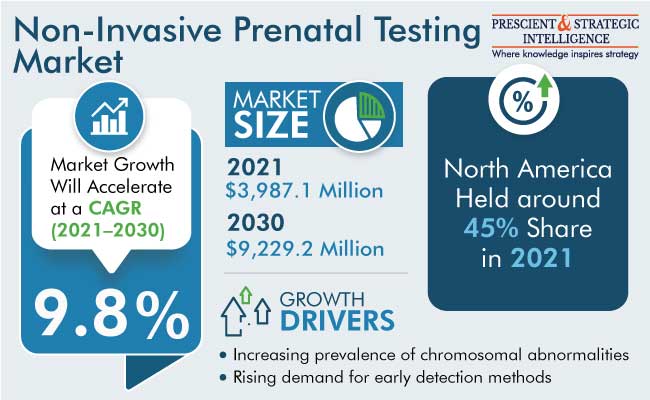 In order to broaden their share in the industry, biotech companies are focused on various methods, including product launches and collaborations with other companies. Specifically, major players have launched many sequencing, genotyping, and array-based solutions for DNA, RNA, and protein analysis. These tests work on the advanced whole-genome next-generation sequencing technology, which is able to detect the changes in maternal chromosomes and fetal DNA.

North America held largest share, around 45%, in the NIPT market in 2021. This is attributed to the strong healthcare infrastructure and technological advancements in the field of diagnostics.

In North America, the U.S. holds the leading position, and it will grow with a CAGR of 8%, attributed to the strong financial support. The increasing incidence of chromosomal abnormalities in the U.S. has led to a rise in the demand for prenatal testing. Since the U.S. offers advanced tests for genetic conditions, it leads the regional market. Additionally, the whole-genome next-generation sequencing technology is being used for the purpose in the U.S. and Canada as it offers quicker and more-accurate results.

Moreover, as regional governments are focusing strongly on the reimbursement policy for NIPT, the adoption of prenatal testing has enhanced. In addition, due to the recent technological advancements, consumers and doctors are shifting from invasive methods to non-invasive testing methods.

Researchers in the U.S. estimate that 1 in every 1,200 people are suffering from Down syndrome. African–American babies have a higher risk of Down syndrome compared to Caucasian babies. The survival rate of babies diagnosed with this condition is approximately 90% up to 1 year and 80% up to 20 years of age. Moreover, in recent years, the quality of life of patients has improved dramatically, mainly credited to early diagnosis and management.

Moreover, the American College of Obstetricians and Gynecologists and the Society for Maternal–Fetal Medicine endorse NIPT as it has the fewest false positive chances and highest accuracy for various genetic disorders.

The Asia-Pacific region is expected to show significant development due to the increasing need for the treatment of chromosomal abnormalities in developing nations, such as India and China. The region is home to a large population suffering from genetic diseases. Additionally, the awareness about advanced technologies for treating such patients is increasing, thereby enhancing the growth potential of the market in this region. 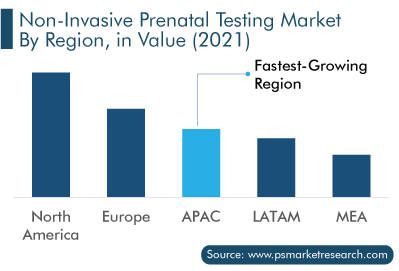 The sale of instruments is growing at a remunerative rate too, and among all instruments, NGS systems are used the most for the identification of fetal chromosomal abnormalities. NGS is preferred for the sequencing of whole genomes as it possesses great clinical efficiency.

Moreover, as per government reports, out of every 15,000 patients above the age of 35 years, more than 80% have tested positive using the cell-free DNA method. Thus, due to the greatest accuracy of the results provided by cell-free DNA in maternal plasma tests, the majority of the individuals adopt this method.

Similarly, advanced technologies and the benefits real-time, quick monitoring of chromosomes drive the growth of the ultrasound detection category. The growth in the usage of the ultrasound method can also be credited to the accuracy of the results and the ability to see macro deformities with the naked eye.

Based on application, Trisomy accounted for the major share, credited to the increasing number of women becoming pregnant at a greater age, which significantly increases the risk of chromosomal abnormalities. As per observations, NIPT is the most sensitive and specific for Down syndrome; hence, Trisomy is the primary application and it is expected to grow at the highest CAGR during the forecast period. 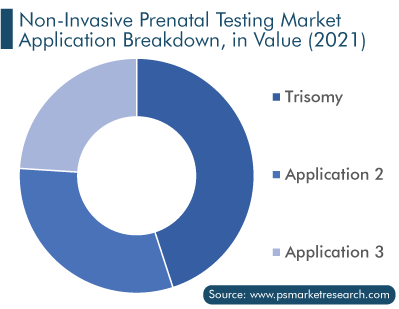 The increasing age of the mother can prompt a variety of medical issues, such as hypertension, reduced fertility, premature delivery, stillbirths, maternal mortality, and high chances of miscarriages. Moreover, due to irregular gene division, genetic disorders can increase in likelihood.

Every year, approximately 6,000 people are born with Down syndrome, and for every case, the age of the mother has been above 30 years. Altered recombination is possibly the key factor responsible for Trisomy and other disorders that are related to the genes.

Frequently Asked Questions About This Report
How big is the NIPT market?+

What is the estimated growth rate of the NIPT industry in the coming years?+

What are the opportunities in the NIPT market?+

Emerging economies could offer vast opportunities to the market for NIPT.

What is the key application in the NIPT industry?+

Trisomy dominates the application segment of the NIPT industry.

What is the biggest driver for the NIPT market?+

The market for NIPT is majorly driven by the high prevalence of genetic disorders, the risk of which increase with the growing age of the mother.