The global nerve repair and regeneration market size stood at $6.2 billion in 2021, which is expected to reach $17.47 billion by 2030, advancing at a CAGR of 12.2% during 2021–2030. This is primarily ascribed to the rising prevalence of traumatic brain injuries (TBIs), as well as various neurological diseases, such as acute spinal cord injury, ataxia, and Alzheimer's disease. In addition, the surge in support from government organizations for research on nervous system disorders is expected to drive the domain growth in the forecast period.

Furthermore, dystonic patients undergoing deep brain stimulation, as well as those suffering from Parkinson’s disease, are extremely likely to experience chronic stress due to social restrictions. Around 7 million elderly people in the U.S. are living with Alzheimer’s disease in 2022. Thus, the demand for therapies and drugs that can help repair or regenerate nerves is burgeoning among them and the access to such treatments is also widening.

Moreover, emerging economies, such as India, Brazil, and China, are offering lucrative growth opportunities for the domain expansion. This is on account of the large population, surge in the neurological disorder incidence, and spur in the healthcare spending in these countries. The large number of stem cell therapies under clinical trials and many more that have already been approved and adopted are also expected to burgeon the domain size in these countries.

In addition, bioengineering strategies for reviving vision have ushered a new era in the healthcare industry. For instance, Medtronic has launched the Vanta and Intellis neurostimulators for the treatment of diabetic peripheral neuropathy. 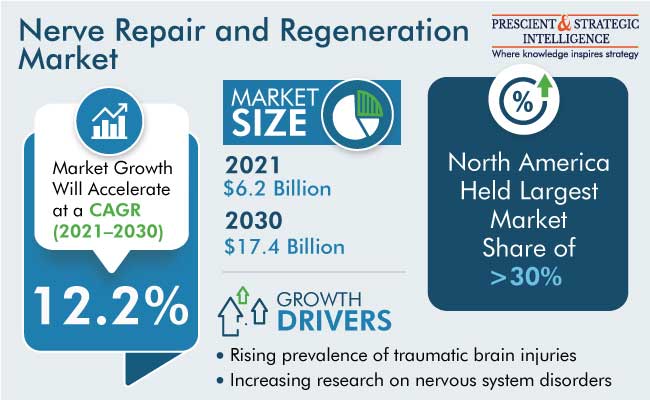 Further, the awareness of mental disorders has grown with various private and public healthcare organizations around the world taking initiatives in this direction. For instance, 10th has been designated World Mental Health Day by the World Health Organization to raise awareness of the related illnesses, promote access to services, reduce stigma, and educate people about the treatment choices. Similarly, the National Alliance on Mental Illness (NAMI) was founded in the U.S. in 1979 to offer psychoeducation and support, to improve the lives of people with mental illnesses.

Hence, the rise in the awareness of the use of therapies such as spinal cord repair, immune response, neuroregeneration, and peripheral nerve regeneration and repair for the management of Alzheimer’s disease, Parkinson's disease and other neurological disorders is expected to promote the domain growth.

In this regard, the surge in the cases of peripheral nerve injuries contributes to the domain growth. The most-common cause of these injuries is trauma caused by road accidents, and its socioeconomic impact is projected to increase in the coming period. Moreover, an incessant escalation is being observed in the incidence of migraine and epilepsy amongst all age groups worldwide. Nerve repair devices can be utilized for the treatment of these disorders when all other forms of therapy have shown little or no significant results. Neuromodulation devices are also used in the treatment of depression and sleep apnea.

The extended support from government organizations for the treatment of brain diseases is burgeoning the domain expansion. For instance, the FDA has cleared the use of devices providing vagus nerve stimulation and transcranial magnetic stimulation for the treatment of depression in patients with severe illnesses. Moreover, it has approved the first fully implantable neurostimulator to treat obstructive sleep apnea.

Neurostimulation/Neuromodulation Devices Being Used Most

The neurostimulation/neuromodulation devices category held the largest nerve repair and regeneration market share, of more than 64%, in 2021. This is primarily due to the increasing number of commercialized spinal cord stimulation (SCS) products, itself due to the surge in the count of people with spinal cord injuries. In addition, the rising number of applications, technological advancements, and biocompatibility of these devices are propelling the category size. Furthermore, the increasing government funding for product innovations and availability of favorable reimbursement policies in developed nations are expected to play a key role here during the forecast period.

The rise in the neurological disease burden has been identified as one of the major contributors to the global disease burden. There are over 1,000 nervous system disorders, such as Alzheimer's disease, cerebrovascular diseases, dementias, epilepsy, migraine, tetanus, Parkinson's disease, meningitis, poliomyelitis, and multiple sclerosis. As per a government organization, around 40 million Americans are suffering from migraine, with women three times as prone to it than men.

The rapid advances in neurostimulation technologies are bringing relief to a vast number of patients suffering from debilitating neurological and psychiatric disorders. Neurostimulation therapies include both invasive and non-invasive methods that use electrical stimulation to generate neural function within a circuit.

The neurostimulation and neuromodulation surgeries category accounted for the largest revenue share, of more than 34%, in 2021. This is due to the several initiatives of government organizations for conducting the clinical trials of biomaterials and the recent approvals to several of these products. The burgeoning number of medical centers in developing countries providing stem cell therapies is also positively impacting the category’s size.

The North American region accounted for the highest revenue share, of more than 30%, in 2021, owing to the rising number of geriatric patients, coupled with the surge in the incidence of neurological diseases in the region. In addition, the presence of major medical device companies, such as Medtronic plc, Abbott Laboratories, and Boston Scientific Corporation, and the favorable government policies, primarily with regard to health insurance, are driving the regional domain size.

Moreover, the key players are actively involving themselves in the launch of technologically advanced products. For instance, Boston Scientific Corporation has launched the Precision Montage MRI-safe SCS device for the treatment of chronic pain, while Medtronic plc has launched the Reclaim DBS therapy for those suffering from obsessive–compulsive disorder.

APAC is expected to register the highest CAGR, of more than 13%, during the forecast period, owing to the increasing cases of neurological disorders, such as Alzheimer’s, epilepsy, Parkinson’s, and essential tremors; rising healthcare expenditure, and a growing geriatric population. In addition, the adoption of innovative technologies for the treatment of these diseases is driving the regional development. In the APAC region, the adoption of nerve regeneration and repair therapies in India, China, and Japan is growing at a rapid pace owing to a spur in the healthcare infrastructure growth rate and penetration of new technologies. 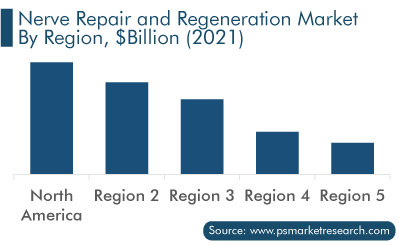 Top Players in Nerve Repair and Regeneration Market Are:

Frequently Asked Questions About This Report
What are the drivers for the nerve repair and regeneration market?+

The market for nerve repair and regeneration is driven by the rising incidence of TBIs and other neurological diseases.

What is the value of the nerve repair and regeneration industry?+

The nerve repair and regeneration industry valued $6.2 billion in 2021.

What will be the nerve repair and regeneration market growth rate?+

Which is the largest regional nerve repair and regeneration industry?+

Which is the dominant product in the nerve repair and regeneration market?+

Based on product, the largest share in the market for nerve repair and regeneration is held by neurostimulation/neuromodulation devices.