The global MVNO market generated revenue of $75,109.1 million in 2022, which is expected to grow at a CAGR of 7.3% during 2022–2030. This is ascribed to the surge in the penetration of mobile devices and demand for low-cost mobile services; rapid growth in the need for triple-play services in developing countries; and an increase in the requirement for high-speed internet connectivity. Moreover, the rising demand for improved voice, video, and mobile data and the surging penetration of the internet are other key growth drivers for mobile virtual network operators (MVNOs), who offer these solutions at a lower cost than mobile network operators. 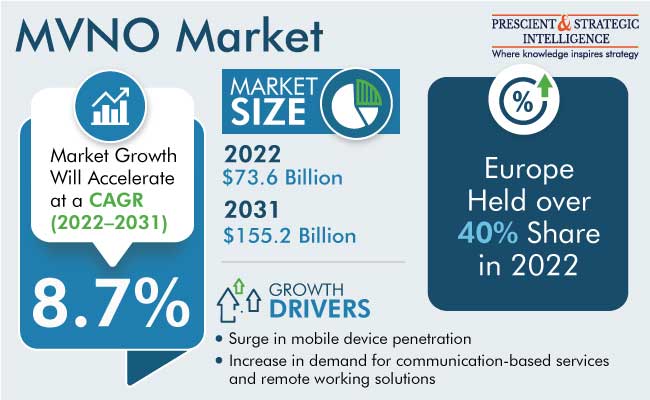 The prepaid category will witness faster growth during the forecast period, advancing at a CAGR of around 8%. This can be because people are choosing prepaid plans, as these provide them the freedom to customize their plans to meet their needs, especially those that use the pay-as-you-use model.

Whereas, the postpaid category accounted for a larger revenue share in 2022, and it is further expected to dominate the industry during the predicted period. This is because consumers do not need to pay anything upfront, and also get a monthly bill as per the usage of services while opting for postpaid plans. Moreover, their unlimited service provision and facility of roll-over unused data further contribute to the market growth in this category.

While traditional, full MVNOs accounted for the majority of the mobile virtual network operator market revenue during the historical period, new players are entering the industry with a primary focus on value-added services. Banks, smartphone vendors, supermarkets, media companies, and other entities have entered the market with new MVNO business models. These players are giving stiff competition to existing players in terms of cost differentiation. As a result, traditional players too have started focusing on managed services, internet protocol private branch exchange (IP PBX), and business solutions, instead of price differentiation. Thus, MVNOs in the business sector are gradually expanding in both developed and developing countries by offering value-added solutions.

The discount category, based on service type, accounted for the largest revenue share, of around 30%, in 2022, and it is also expected to maintain its dominance during the forecast period. This is ascribed to the rapid digitization, rising customer engagement, surging need for MVNO solutions in small and mid-sized enterprises, and declining costs of telecom services due to the increasing competition in the industry.

Whereas, the cellular M2M category will witness the fastest growth during the predicted period. This can be attributed to the increasing usage of cellular connectivity across a range of devices, from automobiles to vending machines; advancements in the 3G M2M technology; and extension of mobile network coverage. Furthermore, initiatives taken by several MVNOs to expand their range of services further support the market growth in this category. 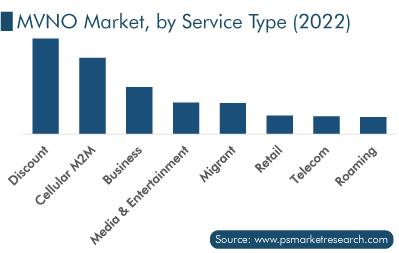 In recent years, cloud deployment has gained significant traction, with several MVNOs deploying solutions on the cloud for their operations. However, only a few MVNOs have deployed cloud technologies on their infrastructure. Thus, the cloud deployment of solutions is expected to remain a driving factor for the market in the years to come.

A large number of mobile operators have shifted toward flat network architecture since the introduction of long-term evolution (LTE), 4G, and 5G standards. This architecture enables cloud-based applications and solutions to be offered via the platform-as-a-service (PaaS) model. These solutions can include everything from billing, customer relationship management (CRM) integrators, and product catalogs to invoicing and bill formatting. PaaS services can be shared among MVNOs, thus resulting in cost benefits due to load elasticity. Moreover, MVNOs also utilize the public cloud infrastructure, which provides them with cost benefits and business agility, thus ultimately helping them in gaining and retaining customers.

The full MVNO category, based on business model, accounted for the largest revenue share, of around 60%, in 2022, and it is further expected to dominate the industry during the predicted period. This model is become popular, as MVNOs operating on it provide their SIM cards, upsell their services as value-added services, and ensure complete customer ownership and relationship. Moreover, in the coming years, non-telecom companies, such as retailers, financial institutions, and postal service providers, are expected to enter the industry through the full MVNO business model, which further contributes to the market.

The consumer category, based on subscriber, accounted for a higher revenue share in 2022, and it is expected to maintain its position in the coming years as well. This is ascribed to the rising number of mobile network subscribers and the mounting penetration of mobile devices. The surging penetration of mobile devices propels the usage of data-intensive applications, such as internet browsing and video streaming. As a result, increasing investments are being made to improve the network coverage and raise the number of mobile broadband (MBB) connections, which further drive the market growth in this category.

Europe Is the Prime Revenue Contributor

The European market accounted for the largest revenue share, over 40%, in 2022, and it is further expected to maintain its dominance in the future, advancing at a substantial CAGR. This is due to the high adoption rate of advanced technologies, infrastructure development, and the presence of a large number of MVNOs and significant ARPU. Furthermore, the increasing adoption of integrated services, such as voice-over internet protocol (VoIP), also supports the growth of the regional market.

Whereas, the APAC market will witness the fastest growth in the coming years. This can be ascribed to the collaborations between industry players and mobile phone manufacturers. Additionally, developing countries, such as China and India, are working consistently on the betterment of their IT and telecom infrastructure, for providing enhanced telecommunication solutions.

Moreover, the development of the APAC market is projected to be significantly influenced by nations, such as India, South Korea, Malaysia, Japan, China, and Australia, having sophisticated cellular networks. For instance, MVNOs provide surveillance, online gambling, M2M, and remote vending machine management across the region. They additionally offer voice-controlled solutions in the healthcare sector for patient monitoring and security applications. 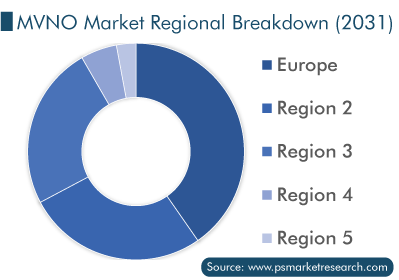 Triple-play services are bundle packs offered by MVNOs, which include broadband internet access, television, and latency-sensitive telephone services. The concept of triple-play has been rather successful in North America. In the U.S., numerous telecom operators are offering triple-play services to consumers. It is likely that in a few years, these services will be delivered throughout the world via the internet. Also, major software companies are developing applications for offering such services in developing countries.

Mobile phones are progressively becoming multi-feature gadgets, with functionality way beyond voice calls. Smartphones can deliver audio, video, and text in the form of internet data, and provide global positioning system (GPS) and location-based and other similar functionalities. In addition, the presence of MVNOs in APAC and Africa is expected to play an important role in the expansion of triple-play services, owing to the favorable demographics and a largely untapped market for such services here.

Key Players in the MVNO Market Are:

Based on Business Model

Frequently Asked Questions About This Report
What was the size of the MVNO market in 2022?+

What will be the growth rate of the MVNO market during the forecast period?+

Which is the largest service type in the Indian EV battery swapping market?+

Discount is the largest service type in the MVNO market.

What are the major drivers for the MVNO market?+

The major drivers of the MVNO market include the rising demand for triple-play services and low-cost mobile services in developing countries, the surging mobile device penetration, and the increasing demand for communication-based services and remote work solutions.