The global mobile gaming market size was $93,163.8 million in 2021, and it is expected to grow at a CAGR of 12.2% during 2021–2030. The growing adoption of innovative technologies for making games, as well as the increasing smartphone usage, is an important contributor to the growth of the market.

In addition, the growing popularity of esports is a major driver for the market. Furthermore, as the 5G technology becomes more widely used, users will have access to faster data speeds, thus expanding the market for mobile games. Furthermore, as the disposable income increases, people are able to buy smartphones, thus resulting in an increase in the number of gamers. 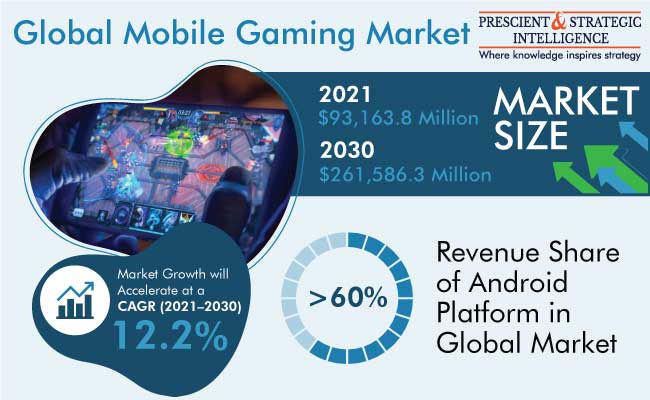 The gaming market is growing around the world, and smartphones are playing a big part in it. The gaming business has gained scalability as a result of the emergence of mobile games. Platforms such as Facebook and Instagram have begun to feature mobile games in order to leverage compelling games to improve their advertising tactics.

Since most nations around the globe are on a heightened alert to prevent the coronavirus from spreading, implementing lockdowns and stay-at-home orders for the same, there has been a substantial rise in the demand for digital entertainment, especially smartphone games. Major mobile game publishers have noticed a massive surge in downloads in COVID-19-affected markets.

For instance, the World Health Organization (WHO) recommended citizens to stay home and play games during COVID-19. The gaming campaign #PlayApartTogether went viral owing to support from the WHO and the aggressive product development by several gaming companies, notably Activision Blizzard and Glu Mobile.

Google Play held the largest market share, of more than 60%, in 2021. The sale of smartphones running the Android OS is expanding in developing markets, such as India, Brazil, and China, which is driving game downloads via the Google Play Store. 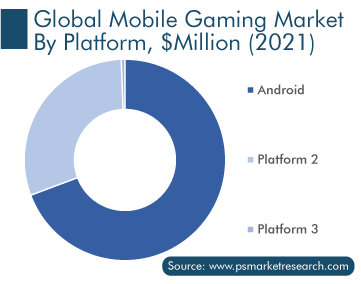 The freemium business model is expected to witness the highest CAGR, of more than 10%, during 2021–2030. The additional benefit of making in-game purchases provided by freemium games is credited for the growth. In a freemium game, the basic game edition is accessible completely free; nonetheless, the user must pay for the extra functions or level upgrades.

The layout aspect of freemium games is essential since the customer should not think that a level is either too difficult to progress or too easy to pass. Advertisements, in-app purchases, and virtual item purchases account for a substantial portion of the revenue for the freemium game creators.

Furthermore, the availability of numerous payment mechanisms with such firms allows gamers to choose as per preference, hence enhancing mobile game income. For instance, Candy Crush Saga earns revenue through the freemium model. 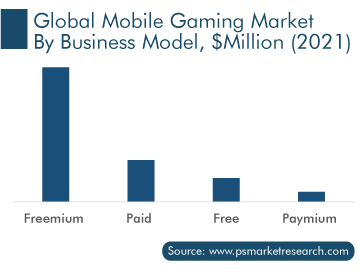 In 2021, the 24–44 years age group held the largest share in the market due to this age group's greater adoption of advanced technology. Furthermore, the majority of the smartphone users are in this age bracket, as they are technically sophisticated and keen to try new products. The release of new smartphones with special features that support high-tech games influences gamer involvement, because these devices provide a better user experience.

The market in APAC is being driven by an increase in internet access, as well as the growing sales of mobile phones due to the rising middle-class population in emerging economies, such as China and India.

Numerous businesses think APAC to be an investment hotspot due to its burgeoning youth and middle-class populations, which is tech-savvy and richer than before. Moreover, India is adopting measures to expand values and beliefs through games. In February 2021, the Indian government announced the creation of a center of excellence in gaming, in collaboration with IIT Bombay, to promote Indian beliefs, cultural ethos, and legacy. The government is working on a way to develop local mobile gaming apps, which will help the nation's mobile gaming companies thrive.

Additionally, with the increasing usage of advanced technologies, China is one of APAC’s most-important economies. Moreover, the rapidly increasing exports and ongoing innovation in mobile games are essential market drivers. Besides, China has seen a significant growth in its gaming sector amidst the pandemic.

In July 2021, Influenzer, a social, multi-player mobile game, was released by Gamestacy, a social network-based user-generated games platform, and Beamable, a technology company.

Moreover, even non-gaming businesses are entering the market because they see a lucrative potential for growth. For instance,

In August 2021, Netflix started testing its games within its mobile application for users in Poland. According to the company, Stranger Things: 1984 and Stranger Things 3 would be tested out by paid subscribers.

The research offers the market size of the global mobile gaming market for the period 2017–2030.

Based on Business Model

Frequently Asked Questions About This Report
What is the target market for mobile games?+

The biggest target audience in the market for mobile games is the 24–44 age group.

What is the mobile gaming industry potential?+

Why did COVID-19 boost the mobile gaming market?+

Mobile gaming businesses bloomed during the COVID-19 pandemic due to the confinement of people in their homes, which massively drove the demand for entertainment.

What is the key trend in the mobile gamings?+

Cloud games are the biggest trend in the market for mobile games.

What is the most-lucrative platform for mobile gaming industry players?+

Firms in the mobile gaming industry currently make the most money from games downloaded via Google Play Store.