The global methanol market stood at around $20 billion in 2020. This is attributed to the high usage of methanol in manufacturing of petrochemicals such as formaldehyde, acetic acid, dimethyl ether (DME), olefins, methyl tert-butyl ether/tert-amyl methyl ether (MTBE/TAME), methyl methacrylate (MMA), and solvent. Moreover, there is an increase in demand for methanol-based fuel, as it is one of the alternative fuels of automobiles, which would help in maintaining environment clean and green.

Due to the COVID-19 pandemic, there has been significant impact on demand, supply, and consumption of methanol, globally. This is due to the strict government policies and regulations that have led to the lockdown in different countries across the world, which has disrupted the supply chain. Moreover, the shortage of raw materials in various companies due to the lack of transportation has also affected the growth of the methanol market. 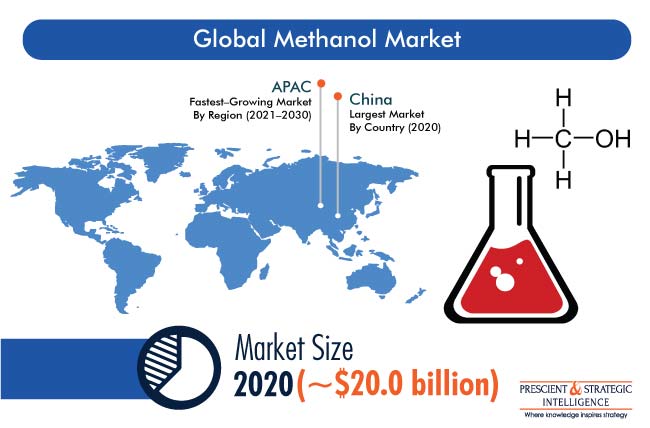 Due to Economical Process of Production, Natural Gas Holds the Largest Market Share

On the basis of feedstock, the methanol market is categorized into natural gas, coal, coking gas, and heavy liquid. Among these, the natural gas category holds significant share in the market. This is ascribed to the high usage of natural gas as a feedstock for the production of methanol. Also, the production process with natural gas is easy and economically feasible, as the cost of production is low and it occurs at moderate temperature and pressure.

Based on application, the methanol market is categorized into formaldehyde, acetic acid, methanol to olefins/methanol to propylene (MTO/MTP), MTBE/TAME, dimethyl terephthalate (DMT), DME, MMA, biodiesel, solvent, and others. Out of these, the formaldehyde category is expected to grow significantly during the forecast period (2021–2030), owing to its wide range of applications, such as in making building materials and many household products. Additionally, formaldehyde is used on a largescale to manufacture interior-molded components of vehicles to reduce weight and increase fuel efficiency. Also, its usage as a preservative in biological materials eliminates the growth of bacteria or pathogens.

The increase in demand for petrochemicals in APAC would boost the growth of the methanol market. In the petrochemical industry, methanol is widely used in the production of formaldehyde, DME, DPT, and acetic acid. With the growing petrochemical industry and increasing usage of methanol-based fuel in countries, such as China, India, and Japan, the demand for the chemical is increasing in the region. Moreover, China holds significant share of the total methanol consumption in the region, due to the presence of large base of end-use industries in the country. Other factors, such as rising construction activities, surging automobile production, and growing electronics industry in regional countries, mainly in China and India, have led to the rise in demand for methanol in the region. 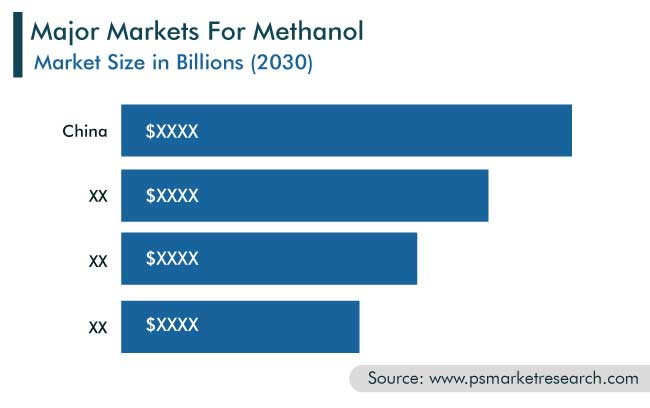 Several methanol manufacturing companies, such as Methanex Corporation and BASF SE, are focusing more on R&D on new and sustainable production methods of methanol, as its production is mostly done using natural gas and coal, which are non-renewable sources of energy and depleting fast. Moreover, byproducts of burning coal are harmful to nature, which affect the usage of these products as feedstocks. Hence, the companies are researching on efficient and sustainable methods for producing methanol from biomass or biogas.

In the petrochemical industry, methanol is used to manufacture several petrochemical products, such as formaldehyde, acetic acid, MTBE, MMA, methyl chloride, and methylamine. Since end-use industries, such as construction and automotive, are expected to witness significant growth across the world during the forecast period, due to the rising disposable income and growing population, the demand for aforementioned products would also rise in order to mitigate the demand and supply gap. This would propel the demand for methanol. Further, the increasing globalization is also projected to create opportunities for petrochemical companies to open their manufacturing facilities in different regions to maintain profitability, which would again increase the demand for methanol as a raw material for the production of petrochemicals.

In recent years, the companies have been focusing mainly on facility expansions for more R&D activities and improving their position in the market, For instance:

Some Key Players in Methanol Market Include:

The methanol market report offers comprehensive market segmentation analysis along with market estimation for the period 2015-2030.

Frequently Asked Questions About This Report
How much the methanol market valued in 2020?+

Which is the most-significant feedstock in the methanol industry?+

Natural gas is the largest category under the feedstock segment of the methanol industry.

What are the key drivers for the methanol market?+

The major methanol market drivers are rising demand for petrochemicals and increasing need for methanol-based fuel.

What is the regional scenario in the market for methanol?+

Which is the strongest strategic measure among players in the methanol market?+