Among all regions, North America is expected to lead the market, mainly due to the presence of large number of medical device manufacturers and domestic availability of technologically advanced high-end medical devices. Other factors driving the region’s growth include availability of low-cost labor and less expensive infrastructure. 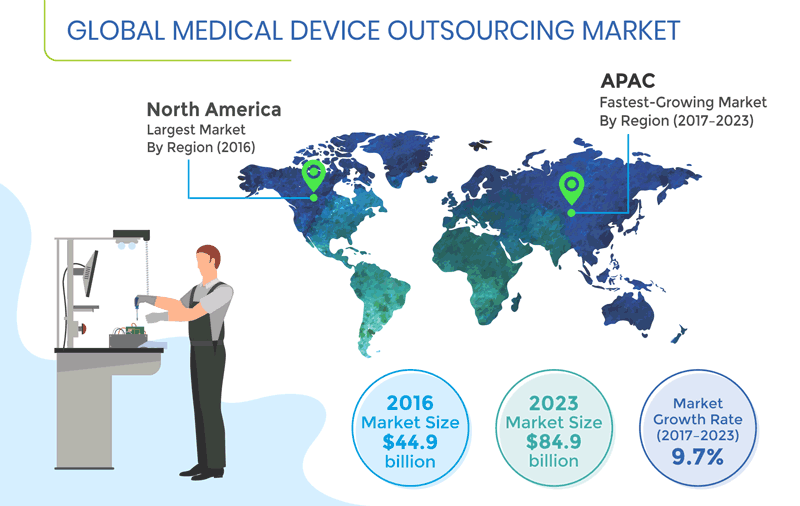 The key driver of medical device outsourcing market is the cost-effective and speedy manufacturing of products. Manufacturers outsource the production of their products in order to reduce cost and time. Moreover, instead of bringing in equipment to manufacture medical devices, it is preferable for the manufacturers to outsource the production operations entirely to contract manufacturing organizations (CMOs) based in Taiwan, China, and South Korea, and several other countries in order to efficiently handle quality and maintenance.

Globally, the incidences of chronic and acute disorders are increasing. According to Micro Interventional Devices Inc., about 20–25% of the adult population suffers from structural heart defects in the U.S. In addition, an article published in Cardiac Failure Review reports 5.7 million heart failures in the U.S. in 2016. This number is projected to reach eight million by 2030. Therefore, these statistics clearly highlight the need for affordable cardiac and other treatment devices, thus providing an impetus to outsourcing medical devices. 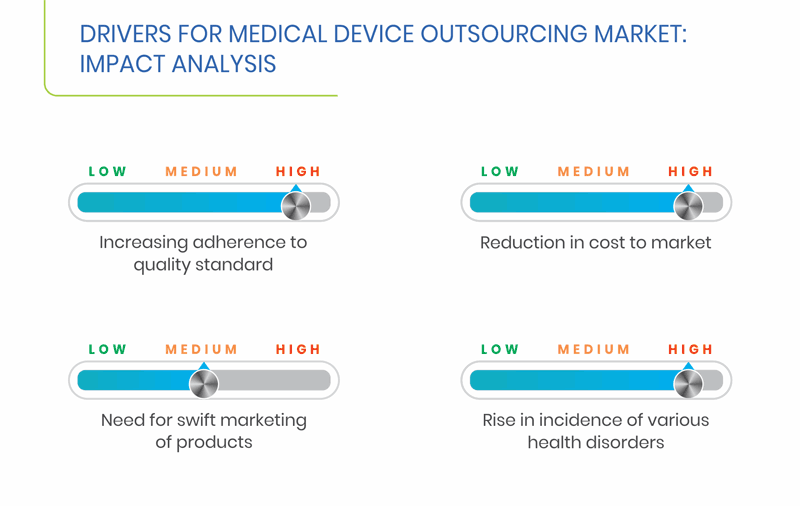 The players in the medical device outsourcing market are expected to witness ample growth opportunities in developed countries. Several international medical device companies choose to manufacture their devices in emerging nations in Asia, owing to low labor costs and high quality. For instance, labor cost is quite less in Vietnam, India, and Indonesia as compared to other countries; however, China has witnessed significant increase in labor cost in recent years. Several Asian countries manufacture medical device products, such as drainage bags, surgical tapes, and rubber gloves in high number, due to less overhead for rent, utilities, medical device components, raw materials, and equipment. In addition, manufacturers there also produce sophisticated Class III medical devices, such as drug-eluting stents.

The electronics product category is expected to dominate the medical device outsourcing market, holding 45.4% share in 2023. The increase can be attributed to the rise in the demand for affordable electronics devices in medical device industry and increasing cost pressure on the manufacturers.

The medical device outsourcing market is categorized into class I, class II, and class III, based on device type. Among these, Class II is expected to hold largest market revenue, of $46.9 billion, in 2023. This large contribution is attributed to the increasing surgical procedures, globally. The Class II medical devices primarily include non-invasive devices, X-ray machines, picture archiving and communication systems (PACSs), infusion pumps, powered wheelchairs, surgical and acupuncture needles, suture materials, and surgical drapes. These devices require special labeling, maintenance of performance standards, and post-market surveillance, owing to the design complexity. However, Class III devices are expected to witness the fastest growth, with the CAGR of 10.2%, during the forecast period.

In the medical device outsourcing market, by application, the cardiovascular category is expected to grow at fastest rate, at a CAGR of 10.3%, during the forecast period, owing to the high prevalence of cardiovascular diseases. According to the World Health Organization (WHO), in 2015, around 17.7 million people died from these diseases, which represents around 31% of global deaths.

The finished device manufacturing service category in terms of service held the largest market share in 2016, and is projected to grow at a significant rate during the forecast period.

Globally, North America is the largest medical device outsourcing market, which is attributed to the presence of large number of medical device manufacturers, and easy availability of high-end medical devices in the region. The region contributed 46.4% share to the global market in 2016.

During forecast period, Asia-Pacific (APAC) is expected to witness the fastest growth in the medical device outsourcing market. The major factors responsible for region’s growth are the availability of low-cost labor and less-expensive infrastructure as compare to other developed economies of the world. 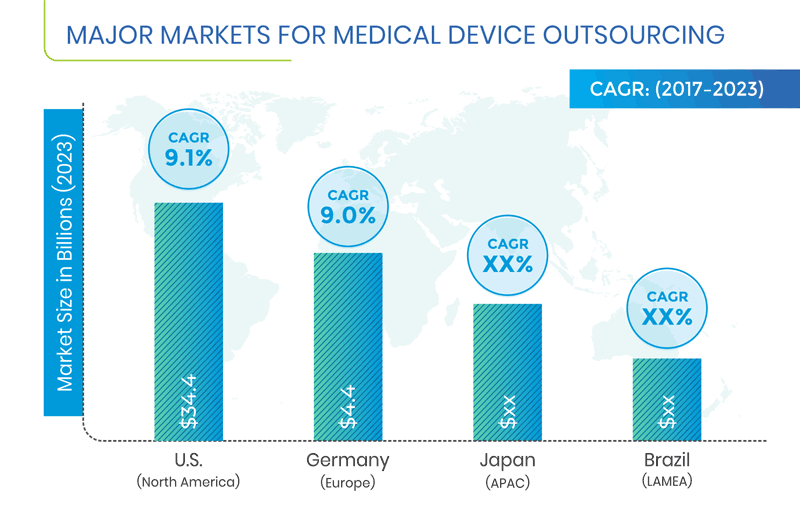 The global medical device outsourcing market is fragmented in nature, mainly due to the presence of small and big players. Some of the giant players that are extensively involved in the medical device outsourcing include Cardinal Health Inc., Onex Corporation, Heraeus Holding GmbH, TE Connectivity Ltd., Flex Ltd., Integer Holdings Corporation, and Nortech Systems Incorporated.

In the recent years, the major players operating in the medical device outsourcing market have been actively engaged in various strategic development to gain a competitive edge and expand their product portfolios. For instance, in February 2018, Nortech Systems Incorporated announced its expansion of the Intercon 1 Group manufacturing facility in Suzhou, Jiangsu, in China, to support its regional machine vision technology customers.