The global mattress market size stood at $32,875.3 million in 2020, and it is set to advance at a CAGR of 7.0% during the forecast period (2021–2030), to reach $64,045.5 million by 2030. This is attributed to the growth of the tourism industry, which is resulting in the rising number of hotels and, in turn, the increasing sale of mattresses. Moreover, consumers’ increasing health concerns have fueled the demand for everyday items, such as mattresses. Additionally, people are willing to pay more for health-enhancing goods, as their disposable income rises.

Due to the COVID-19 pandemic, the demand for mattresses across the globe was negatively impacted in 2020. Quarantines and partial factory closures negatively impacted manufacturers in major European, North American, and some APAC countries. This has led to an insufficient raw material and final product supply during the pandemic, which has significantly affected the growth of the mattress industry. 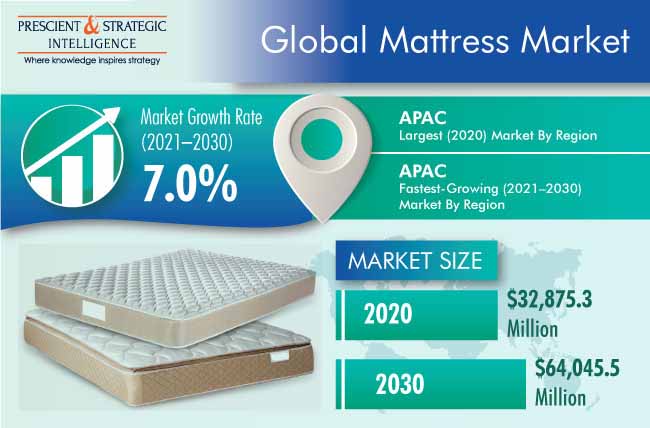 The memory foam category held the largest share in the market for mattresses in 2020, on the basis of product. This is attributed to the heavy usage of memory foam mattresses by people suffering from orthopedic issues, such as joint pains, as they provide more comfort when compared to other types of mattresses. Moreover, these variants are used in the commercial sector due to their easy availability and lower prices.

Owing to Their Preference In Households, Queen-Size Mattresses Generated Highest Revenue In 2020

Queen-size mattresses accounted for the highest revenue in 2020, based on size. This is primarily attributed to the heavy usage of queen-size mattresses in households due to their lower costs. Moreover, mattresses of this size can easily accommodate two adults and a child or pet.

Of the bifurcations under the distribution channel segment, the offline bifurcation held the larger share in the mattress market in 2020 because consumers can get suggestions from sales personnel and choose from a variety of mattresses after trying them first-hand at the store. Moreover, owing to consumers’ preference for trusted aftersales and faster delivery than online platforms, they mostly buy such products from offline stores.

The commercial sector is expected to be the faster-growing category in the market for mattresses during the forecast period, based on end use. On an average, residential users change their mattresses every 9–10 years, while hotels change them every 5–6 years. Hotels witness a high footfall of tourists and business travelers, most of whom are critical of the level of comfort available at such places. This is why hotels and other facilities that offer accommodation frequently replace their mattresses.

Globally APAC was the largest user of mattresses in 2020 owing to the large population of India, China, and Indonesia. As the population rises, the demand for consumer goods, including mattresses, will also increase. Furthermore, the surging disposable income in the developing countries of APAC, such as India, Thailand, and Malaysia, is set to steadily drive the growth of the mattress market. With the rising financial stability of the middle-class population, its propensity to spend is increasing, thus leading to improved standards of living. Thus, the increasing purchasing power of people is expected to support APAC in remaining the largest buyer of mattresses till 2030. 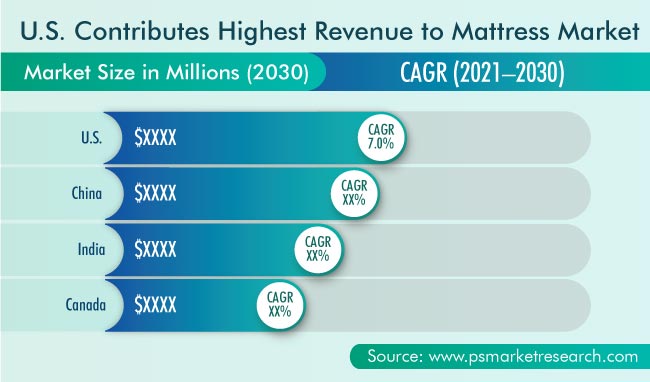 Consumers’ interest has been increasing in healthy and hygienic sleep habits, thus propelling the demand for hybrid mattresses. Such mattresses are made of various components, such as spring coils, polyurethane foam, thermagel, and layers of latex, each of which offers some benefit to the user. Several mattress manufacturers are infusing materials such as copper and aluminum into the mattress fillings, which is a reflection of the innovations being carried out in the manufacturing process. 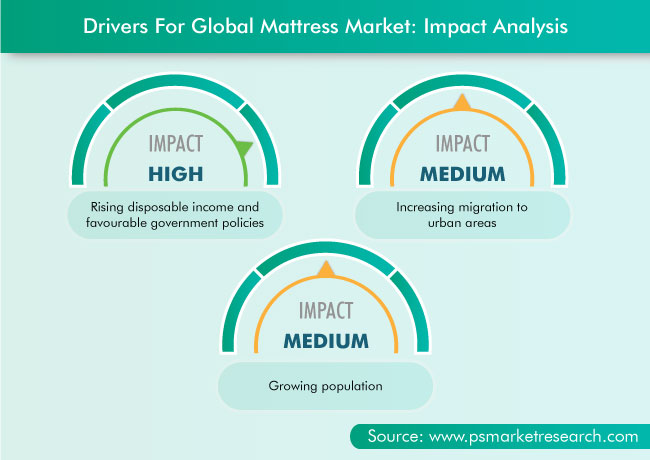 The growing disposable income, coupled with the government policies related to real estate development, has resulted in a rise in the home ownership rate, which, in turn, is supporting the mattress market growth. According to the Organisation for Economic Co-operation and Development (OECD), the average annual growth rate of disposable income, of over 2%, in 2019, globally, and government initiatives are making housing affordable. Furthermore, the increasing disposable income drives the tourism industry, thereby positively impacting the hospitality sector and increasing the demand for mattresses.

Migration is a major reason for the rising population in urban areas, which is driving the real estate industry. The increasing migration of people from rural to urban areas, mainly in the Middle Eastern and APAC regions, is, in turn, propelling the demand for mattresses. According to the United Nations (UN) report World Urbanization Prospects, in 2018, around 55% of the world’s population lived in urban areas, and this share is set to increase to around 68% by 2050.

The global mattress market is highly fragmented in nature due to the presence of a large number of regional and local players. Some of the key players in the market are Tempur Sealy International Inc., Serta Simmons Bedding LLC, Sleep Number Corporation, and Corsicana Mattress Company.

In recent years, companies have focused on product launches, For instance: 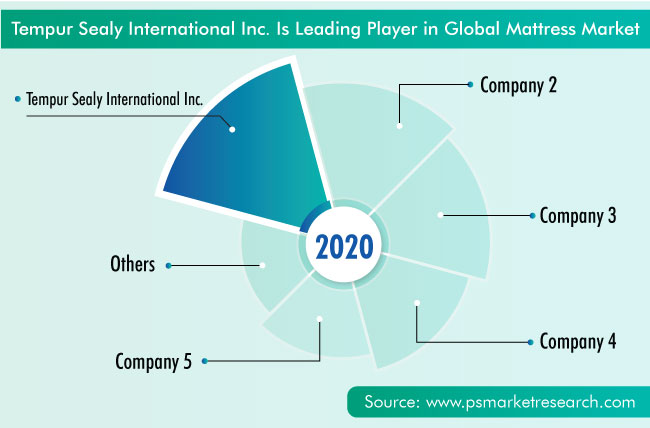 The mattress market report offers comprehensive market segmentation analysis along with market estimation for the period 2014-2030.

Frequently Asked Questions About This Report
What will be the mattress market growth rate during 2021–2030?+

Which is the most-popular product in the mattress industry?+

The product segment of the mattress industry is dominated by the memory foam category.

What is the regional scenario of the mattress market?+

APAC is set to remain the largest region in the market for mattresses till 2030.

What are the key mattress industry drivers?+

The mattress industry is being driven by the extensive migration to urban areas, growing population, expanding tourism and hospitality sectors, and burgeoning home ownership rate.

What are the mattress market players doing for business growth?+

Players in the market for mattresses are launching products integrated with advanced technologies in order to target more customers.