The global maritime surveillance market size was $22,254.6 million in 2021, and it will grow at a CAGR of 6.8% during 2021–2030, to reach $40,386.4 million by 2030. The major factors driving the demand for these solutions are the rising number of maritime threats, including piracy, and strict regulations governing international sea trade. China and Japan are among the top five ship-owning economies, with half of the world’s tonnage owned by Asian companies, which is driving the market for maritime safety solutions in the APAC region. 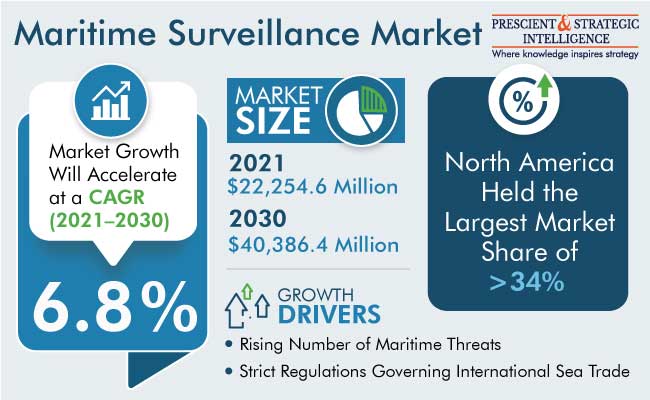 Surveillance and Tracking Technology Accounted for Largest Share in 2021

The surveillance and tracking category dominated the technology subsegment, with a share of 32.3%, in 2021, owing to the usage of various kinds of tracking software in order to monitor the location and give necessary alerts to protect vessels, ports, and other shipping infrastructure. The main means of transportation for international trade is ships, with these vessels carrying around 90% of the traded goods.

Moreover, due to the rising need for maritime security at ports and in coastal areas, in areas such as Russia, LATAM, and the Caribbean, where the occurrence of piracy attacks and robberies has surged rapidly over the past few years, the requirement for these devices is projected to be significant.

Moreover, while nations in North America and Europe adopt cutting-edge maritime security technologies, the APAC region has been the main driver for the maritime surveillance market growth, due to the growing trade and rising maritime tensions. Ports use a wide range of cameras, including infrared, fisheye, and pan-tilt-zoom (PTZ) cameras. For instance, the Long-Range Tracking and Identification (LRIT) System is an international ship tracking system adopted by the International Maritime Organization (IMO) to instantaneously track ships across the world.

The IMO has also developed a framework of standards to ensure shipping activities go on smoothly and seafarers suffer no harm. For instance, the GMDSS implemented by the IMO is a standard for ship-to-ship and ship-to-shore communications, to identify vessels and sailors in distress, while at sea.

Moreover, the screening and scanning category is the second-largest shareholder, with $5470.4 million revenue in 2021. These systems are essential at ports, which receive almost 90% of the goods exported and imported around the world. With such an enormous volume of shipments, it is critical to ensure that only the legitimate ones are sent through, especially considering that shipping containers are widely exploited for drug, arms, and human trafficking.

Moreover, there are certain mandates for the 100% scanning of U.S.-bound maritime cargo for radiological and nuclear threats. U.S. Customs and Border Protection (CBP) took a variety of actions to guard cargo containers after the 9/11 terrorist attacks. In order to detect and scan high-risk containers before they are loaded onto vessels heading for the U.S., the Container Security Initiative dispatches CBP personnel abroad to collaborate with foreign officials, in the months immediately following the downing of the Twin Towers. 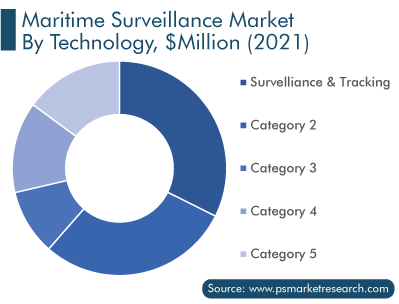 APAC will witness the fastest growth, with a CAGR of 7.2%, and hold the largest share during the forecast period, due to the increasing need to detect maritime hazards and ensure communication with all the available officials across the maritime sector, with advanced software.

Moreover, China is updating all of its maritime-related military and law enforcement sector, including the coast guard, missiles, aircraft, and the surveillance technology. It is creating cutting-edge technologies to compete with American military technologies and deter outside engagement in a fight. China is still primarily investing to prepare for a possible conflict with Taiwan, but it is also putting a lot of effort into preparing for potential problems in the East and South China Seas, which will drive the demand for maritime safety systems.

North America will be the second-fastest-growing in the maritime surveillance market in the forecast period, since the regional governments are stressing maritime safety. Piracy threats are a serious issue, which disrupt critical ship operations, which is why the MSSIS and LRIT systems are being used to protect vessels and sailors.

Through the IMO, the U.S. Coast Guard has led the LRIT program, which mandates that ships report information about their identity and position in real time. Within 1,000 nautical miles of the coastline, the LRIT enables the country to monitor reporting vessels. The MSSIS is an online platform for participating authorities to exchange automatic identification system (AIS) data, which ensures the continuous tracking of ships, so that those in any danger can be identified and helped, as necessary.

Europe is the third-largest shareholder, as the European Union is actively involved in surveillance across its exclusive economic zone and the development of the maritime infrastructure. For instance, maritime integrated surveillance awareness (MARISA) focuses on collaboration among cross-border and adjacent agencies associated with maritime surveillance (navies, customs, coast guards, and border polices), in order to lead to the cost-efficient usage of the existing resources. 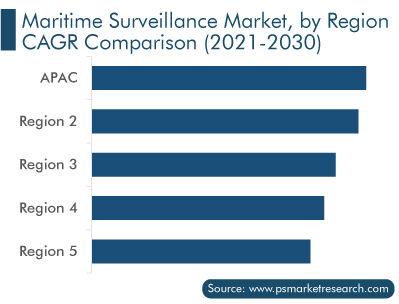 The solutions category holds the major share in the market. In the upcoming years, there will likely be a high demand for these systems with tested target detection capabilities, to help authorities effectively monitor criminal operations, such as drug trafficking, smuggling, illegal immigration, piracy, illicit fishing, and terrorism.

Demand for Risk Assessment and Investigation Will Grow in Coming Years

The risk assessment and investigation category will grow at the highest rate over the forecast period and generate revenue of $1,193.1 million in 2030. Risk assessment is crucial while tending to sensitive goods, as the threat of maritime terrorism, gunrunning, piracy, and other non-traditional seaborne attacks has grown significantly during the past 10 years. The security of the nation and its citizens depend on that of its coast, which is also tied to economic growth, because it influences sea traffic.

Therefore, the use of various kinds of software for assessing the risks in seafaring and investigating specific incidents and impending threats, by tracking the real-time data on the whereabouts of ships, is gaining relevance, thus driving the maritime surveillance market growth. Risk assessment and investigation facilitate the planning of security measures and the procedures to be implemented throughout the system, to tackle interference with offshore facilities and maritime transport.

Players operating in the maritime safety system market have been involved in collaborations and mergers and acquisitions. For instance:

Frequently Asked Questions About This Report
How big is the maritime surveillance market?+

At what CAGR is the maritime surveillance industry projected to grow in the forecast period?+

The forecast period CAGR of the maritime surveillance industry will be 6.8%.

Which regions are covered in the maritime surveillance market report?+

The major regions covered in the report on the market for maritime surveillance are Europe, APAC, and North America.

Who are the influencers in the global maritime surveillance industry?+

The key influencers in the maritime surveillance industry are national governments and the International Maritime Organization.

Solutions register the higher sales in the market for maritime surveillance.