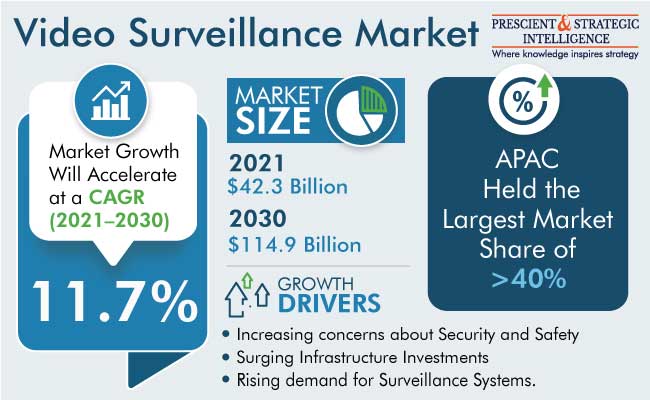 Intelligent video surveillance systems are becoming increasingly important for maintaining security and safety while also analyzing trends and patterns, as these systems use artificial intelligence software. The application aids in the analysis of audio and picture data from video cameras, in order to identify individuals, cars, objects, and different events. Also, AI-powered video analytics can handle duties such as real-time surveillance, people counting, and automated license plate identification, while also providing organizations with non-security-related data.

In the retail business, for example, store owners may detect shoplifters, and information security officers act in real-time by utilizing surveillance cameras with analytics. Aside from retail outlets, sophisticated video surveillance is being used in industrial plants, businesses, warehouses, and banks to identify unexpected activities. As a result, the surging need for intelligent monitoring is driving the demand for software analytics and artificial intelligence, which is bolstering the video surveillance market growth.

Geographically, the North American market is showing a substantial growth rate during the forecast period, owing to the steady rise in robust infrastructure, increase in cases of road rage accidents, and surge in concern for public safety. Therefore, the aforementioned factors are expected to boost the need for video surveillance systems in the region in the upcoming years. 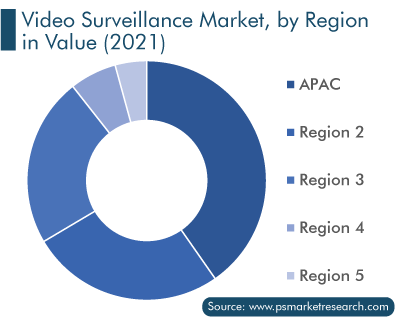 Cameras Are the Most Preferred Hardware Type

Cameras are the highest-revenue generators in the market, accounting for $16.9 billion in 2021, which is projected to grow at a CAGR of around 11.9% during the forecast period, based on hardware type. This is because the combination of deep learning technology and video analytics increases the need for security cameras for a wide range of end-use applications. Moreover, the storage category is also expected to witness significant growth in the coming years. As the adoption of cloud-based surveillance technologies by end users rises, industry players are all being encouraged to leverage resources such as processing power and storage devices. Thus, this factor is driving the market demand for data storage equipment. 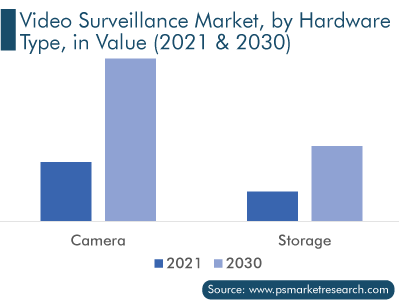 In addition, the demand for IP-based video surveillance systems is expected to increase as a consequence of significant advances in security, network services, and, most importantly, dropping specialized product prices. Furthermore, advances are helping reduce the expenses associated with the installation of surveillance systems. Further, the emergence of 360o video recording technology, for example, has enabled customers to replace 3–4 pan-tilt-zoom (PTZ) cameras. Therefore, this technology is expected to be one of the most revolutionary inventions in the video surveillance business.

For instance, in April 2022, Qognify announced its new video management platform Qognify VMS. It is developed to suit the unique physical security requirements of organizations all around the world. Moreover, it is built on the established technology of Qognify's popular video management software Cayuga, which is utilized in thousands of security installations across the globe.

The market has the presence of several key players, who, in recent years, have been involved in various strategic developments, in order to stay ahead of their competitors. For instance:

Key Players in the Global Video Surveillance Market Are:

Frequently Asked Questions About This Report
What was the size of the video surveillance market in 2021?+

What will be the growth rate of the video surveillance market during the forecast period?+

Which is the largest vertical in the video surveillance market?+

Commercial is the largest vertical in the video surveillance market.

What are the major drivers for the video surveillance market?+

The major drivers of the video surveillance market include the increasing concerns about security and safety, surging infrastructure investments, and rising demand for surveillance systems.