From $830.3 million in 2019, the lancet market value is predicted to progress at a CAGR of 9.5% between 2020 and 2030. The rising incidence of chronic diseases, increasing usage of lancets for testing for allergies, implementation of government policies aimed at promoting the adoption of single-use lancets, and increasing prevalence of needlestick injuries and infections are the main factors fueling the expansion of the market. 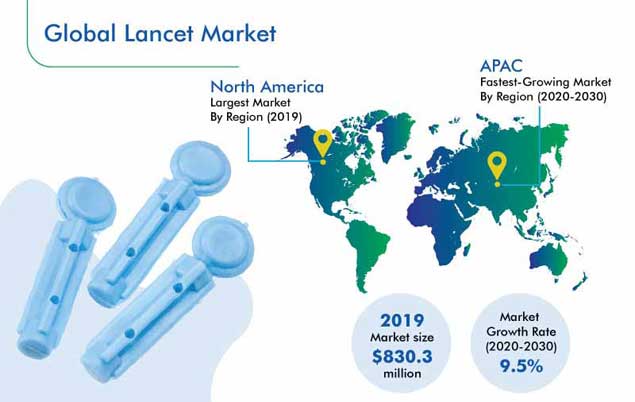 In 2019, the safety category contributed the higher revenue to the market for lancets, under the type segment. This was because of their ability to massively reduce the chances of infection in patients. As per the CDC, every day, 1 in every 31 hospital patients in the U.S. acquires at least one hospital-acquired infection, which is why healthcare professionals are taking more precautions than ever. Moreover, these lancets are designed for automatically retracting after pricking the skin, in order to prevent the occurrence of infections and injuries. Besides this, these lancets eliminate the need for a lancing device, as they can be directly used for drawing capillary blood.

Use of Lancets To Rise Fastest for Testing for Glucose

In the forthcoming years, the glucose testing category, under the application segment, is expected to register the fastest growth. This is credited to the growing incidence of diabetes around the world. As regular blood sugar tracking is required to regulate the administration of external insulin, for keeping this disease under control, its growing prevalence is pushing driving the lancet market. The IDF estimated the global prevalence of this endocrine condition among 20–79-year-olds at 463 million in 2019, which it expects to rise to 643 million by 2030 and 783 million by 2045.

Lancets of Gauge Size 28 To Remain in Widest Usage

The 28 category is predicted to dominate the market for lancets, under the gauge size segment, till 2030. This is attributed to the fact that these needles, because of their smaller diameter, do not cause much pain and still draw an adequate amount of blood. These needles are being extensively used for managing diabetes, which is further boosting the advance of this category.

Procurement of Lancets To Rise Fastest among Hospitals and Clinics

From 2020 to 2030, the market is expected to exhibit the fastest growth in the hospitals and clinics category, under the end user segment, due to the surging requirement for lancets on account of the increasing pool of chronic disease patients at these places. Furthermore, the number of hospitals and clinics is growing rapidly, thereby propelling the category’s advance. This will be a result of the efforts being made by governments around the world to increase the access the quality healthcare to the masses.

North America was the largest lancet industry across the globe from 2014 to 2019, primarily because of the presence of a large geriatric population, rapid technological advancements, and high incidence of chronic diseases in the region. According to the Centers for Disease Control and Prevention (CDC), in the U.S., over 34 million suffer from diabetes. Moreover, in 2019, the country had more than 6,000 hospitals, as per the American Hospital Association, which is among the highest in the world. 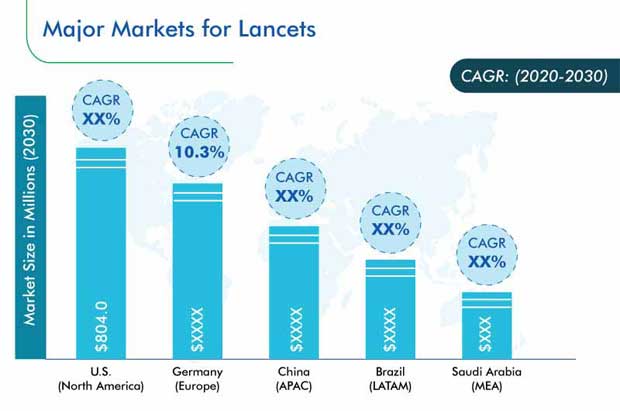 Usage of Lancets Surging in Homecare Settings, Majorly among Diabetics

The adoption of lancets by patients themselves in their homes is one of the biggest trends in the lancet market. This is subsequently fueling the demand for lancets that are easier to use and handle than the ones used in hospitals and clinics. Many industry players are developing easy-to-use lancets on account of the growing requirement for them, especially among geriatric people suffering from diabetes. Moreover, players are launching home-use, simple, and point-of-care-testing (POCT) lancets for monitoring blood glucose levels.

The OneTouch UltraSoft developed by LifeScan Inc. is one of the easy-to-use lancets that are widely being utilized for testing the blood glucose levels in homecare settings.

Increasing Prevalence of Chronic Diseases Is Strongest Driver for Market

The growing incidence of chronic diseases is one of the major factors fueling the usage of lancets across the world. The growing prevalence of cardiovascular diseases (CVDs), diabetes, cancer, and chronic obstructive pulmonary disease (COPD) is pushing up the usage of minimally invasive blood-drawing devices, such as lancets. The World Health Organization (WHO) says that COPD is responsible for the death of 3 million people every year, and more than 235 million people on this planet are currently suffering from asthma. 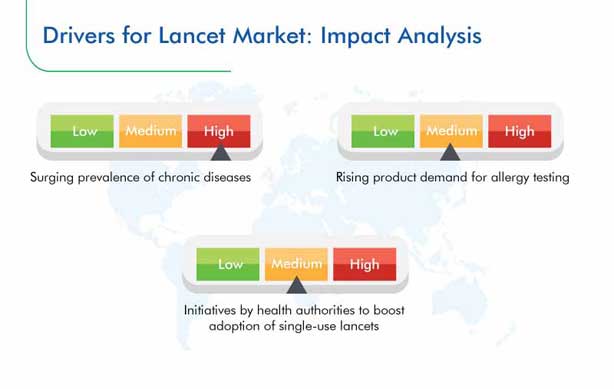 Similarly, CVDs claim the lives of 17.9 million people, while 9.6 million die of cancer every year. Lancets are being heavily used for diagnosing these diseases right at the initial stages, so that the mortality rate can be reduced. This is because the blood contains all kinds of pathogens, hormones, enzymes, and other bodily fluids, which are effective markers of diseases.

Similarly, CVDs claim the lives of 17.9 million people, while 9.6 million die of cancer every year. Lancets are being heavily used for diagnosing these diseases right at the initial stages, so that the mortality rate can be reduced.

For instance, in July 2019, Owen Mumford Ltd. signed an agreement with NIPRO Corporation, a company based in Osaka, to distribute its UniSafe springless devices in Japan.

The lancet market report offers comprehensive market segmentation analysis along with market estimates for the period 2014–2030.

Based on Gauge Size

Frequently Asked Questions About This Report
What was the value of the lancet market in 2019?+

Which “type” category will lead the lancet market in the coming years and why?+

The safety lancet category is expected to continue dominating the market in the coming years. This can be attributed to the high demand for safety lancets across the world, because these are intended for single use, which minimizes the risk of infections.

Which region is expected to witness the highest CAGR during 2020–2030?+

The market is expected to witness the fastest growth in APAC during 2020–2030.