The IoT microcontroller market size was estimated at $4,836.9 million in 2021, and it is expected to grow at a CAGR of 12.4% during 2021–2030. The increasing usage of IoT across various sectors is predicted to drive the global market forward over the forecast period. Furthermore, the demand for connected products, such as tablets, household appliances, televisions, smartphones, security systems, and gaming consoles, is likely to grow, thereby propelling the market.

Another factor predicted to boost the market growth in the near future is the rising inclination for automation across various sectors. Technological improvements in IoT applications, which will provide customers with improved and new smart products, are likely to boost the demand for microcontrollers over the forecast period. 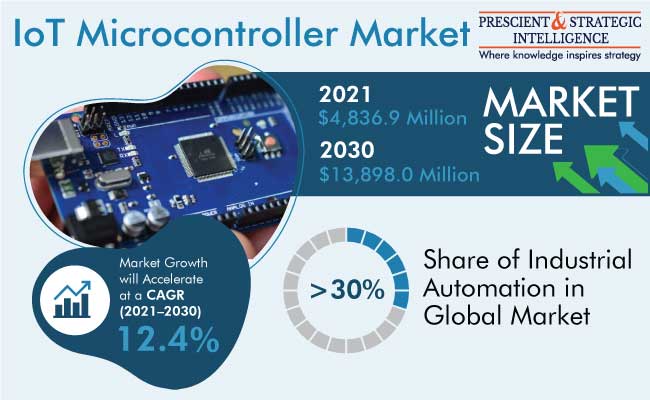 Furthermore, the rapid installation of smart meters across various commercial and residential spaces is expected to drive the demand for microcontrollers in order to monitor overall electrical energy consumption and report the information to the utilities, for automated billing purposes.

The healthcare industry has undergone significant transformations in recent years due to the improvements in computer-embedded technology, wireless devices, and data analytics techniques, such as big data. Additionally, IoT technologies are transforming clinical research by allowing for the analysis of large amounts of highly complex medical information, including genomic data, bioinformatics, and metagenomics. The adoption of IoT and Wi-Fi, as well as investments in healthcare devices, is likely to provide attractive opportunities in the sector, thus accelerating the IoT microcontroller market's development in the future.

For instance, the global population of people aged 60 and above will increase approximately by 16% by 2030 and 22% by 2050. This is leading to an increase in the burden of chronic diseases, which affect 6 in 10 Americans each year, thus driving the demand for patient monitoring devices in the U.S.

During the pandemic, companies across sectors made employees work from home, which resulted in a surge in the demand for IoT-enabled smart gadgets, wearables, PCs, and mobile phones. The COVID-19 pandemic has raised public awareness about health, fitness, and general wellbeing. As a result, wearables that can monitor and track a number of health parameters, such as oxygen levels and the heart rate, have seen a huge increase in demand.

However, the semiconductor manufacturing business was devastated by the COVID-19 outbreak. Manufacturers of microcontrollers had a difficult time balancing the supply and demand, as several production facilities and international commerce crossings were temporarily shut down.

Based on product, the 32-bit microcontroller category is set to dominate the market, by exhibiting the highest CAGR, of more than 12.5%, during the forecast period. This will be owing to the improved functional capabilities of these variants, which are helpful for advanced IoT applications, Industrial 4.0 processes, and small implanted medical devices. Additionally, 32-bit microcontrollers are widely used in industrial automation, as they are affordable. These components offer superior efficiency, ease of use, high performance, and higher processing power than other microcontrollers.

In addition, as 32-bit microcontrollers are also capable of sending real-time sensor information over an IP network, they are deemed essential for businesses to manage geographically distributed teams. 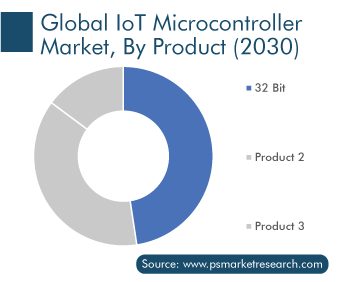 By application, the market is majorly driven by the smart home category, which is set to exhibit the highest CAGR, of more than 12.5%, during the forecast period. The advances in app-controlled (especially mobile app) smart devices have created a high demand for safe, secure, and energy-efficient processes, including HVAC, lighting, and energy management, which is expected to fuel the smart home market growth in the future.

Moreover, with an increasing adoption of new technologies by industries in countries such as China and India, the demand for such components is further projected to witness growth in the upcoming period.

The APAC market is predicted to expand at an approximate CAGR of 12.5% during the forecast period. The rapid improvements in the automobile industry in this region, particularly in terms of interactive vehicle safety systems, are projected to drive the demand for IoT microcontrollers in the coming years.

In addition, the surging demand for smart homes and consumer electronic products, such as smartphones, tablets, smart televisions, and smartwatches, is likely to drive the microcontroller demand in this region. 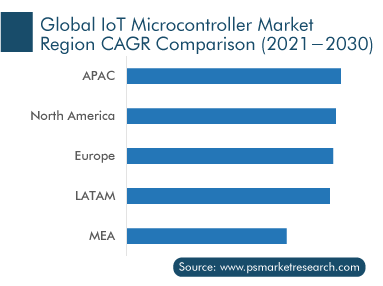 The IoT sector is expanding, and as a result, a slew of new businesses are springing up. Product launches are being used by players in the IoT microcontroller market to widen their global reach.

To prevent losing money due to regulatory infractions, businesses are concentrating their efforts on designing products that adhere to regional regulatory requirements.

For instance, in May 2020, NXP Semiconductor launched E1, a single-board computer, in collaboration with OKdo, one of Electrocomponents Group's business areas. The device, which is based on NXP's LPC55S69 microcontroller, offers a high-performance, low-cost platform for IoT applications.

Businesses are also investing heavily in research and development in order to create products with novel features.

In the same way, in November 2021, Espressif Systems (Shanghai) Co. Ltd. released a smart switch based on the ESP32 C3 SoC. The ESP32 C3 SoC is a high-reliability, low-cost solution that consumes less energy than standard switches, when converted to smart switches.

The research offers market size of the global IoT microcontroller market for the period 2017–2030.

Frequently Asked Questions About This Report
How much will be the IoT microcontroller market revenue in 2030?+

Which is the most-significant region in terms of IoT microcontroller market growth?+

APAC is expected to witness the most-significant growth in the market for IoT microcontrollers.

What is the key opportunity for IoT microcontroller industry players?+

The biggest opportunity for IoT microcontroller industry players is the rapid adoption of connected technologies in healthcare.

The competition in the market for IoT microcontrollers is characterized by product launches.