The global intraoperative neuromonitoring market size was valued at $3.23 billion in 2021, and this number is expected to increase to $4.93 billion by 2030, advancing at a CAGR of 4.8% during the forecast period. This is attributed to the growing prevalence of numerous lifestyle-related chronic diseases such as cardiovascular and neurological conditions, the increasing focus on patient safety during complex and difficult surgeries, and the mounting demand for minimally invasive and advanced intraoperative neuromonitoring devices. Moreover, the high R&D spending by industry giants and various government policies support the market growth. 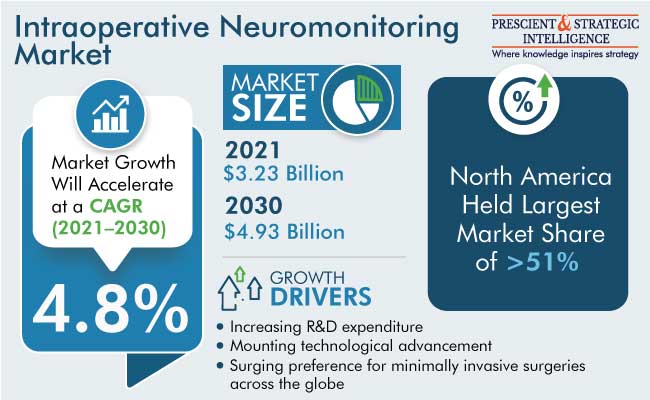 Insourced monitoring accounted for the majority of revenue share, of around 52%, in 2021 and is further expected to maintain its dominance during the forecast period. This is due to the increased surgical cases, high demand for consistent monitoring, and increased acquisitions by device manufacturers over the past few years to get a direct link with hospitals.

Furthermore, outsourced monitoring is gaining popularity, owing to the reducing healthcare costs, the dipping financial burden of purchasing and maintaining systems, and the rising number of outsourcing vendors across the globe. 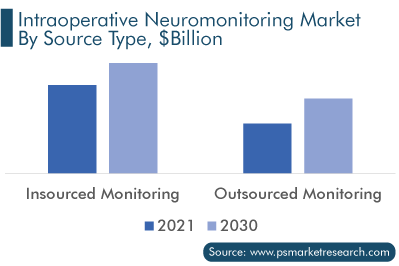 The geriatric population is at an increased risk of having various diseases. The increasing life expectancy and falling birth rate are the major causes of the growing aging population. As age increases, the population is more likely to encounter various chronic diseases such as cardiovascular disease, neuropathic disorders, old age-related trauma, osteoarthritis, and related orthopedic disorders.

Moreover, the risk of developing spinal disorders such as lower back pain increases with age, due to the deterioration of the intervertebral discs in older people. Most of the aforementioned chronic abnormalities are treated with the help of surgical intervention. As neuromonitoring is an important part of surgeries that are associated with the nervous system, the rapidly aging population and favorable demographics across the globe would drive the demand for IONM procedures.

Systems Are the Prime Revenue Contributor

The systems category is the prime revenue contributor to the market in 2021, and it is also expected to grow at a significant CAGR during the forecast period. This is attributed to the surging usage of such systems in medical facilities such as hospitals and ambulatory surgery centers (ASCs) and the increasing need to monitor electrophysiological signals from a patient’s body during surgery. In addition, various instrument sets are available with the IONM system that provides monopolar stimulation and nerve monitoring during sharp dissection, which help in the minimization of nerve trauma during a surgical procedure.

Whereas, the services category will witness faster growth in the coming years. This can be due to the rising number of service providers across the globe, the increasing number of surgeries, technological advancements in medical facilities, and the growing healthcare infrastructure.

Increasing Usage of Neuromonitoring During Complex Surgeries Drives the Market

Spinal IONM is an important procedure that helps in risk management during complex surgical procedures. The use of such advanced devices in the surgical procedure helps in the reduction of risks of impairment to neurophysiologically relevant nerve structures or possible impairment of nerve function as a result of improper positioning of the patient. With the help of several monitoring modalities, nerve structures can be identified and potential impairment can be prevented. Thus, it is an important technology that enables surgeons to focus on optimizing the intervention without causing any harm to the neural structures. Therefore, potential risk management is expected to drive the intraoperative neuromonitoring market growth.

The ASCs category will witness faster growth during the forecast period. This can be ascribed to the improved treatment provided in ASCs in numerous specialties that include neurosurgery & spine, cardiology, ENT, gastroenterology, general surgery, gynecology, and total joint replacements. Additionally, there is a surging trend of cases being transferred from primary hospitals to ASCs, mostly for reasons of patient safety, profitability, cost-cutting, and improved patient outcomes.

Increase in Prevalence of Chronic Diseases

Spinal disorders are a major medical, social, and economic burden because of their high prevalence. Lower back pain is the second most common cause of disability in the U.S. and a common reason for absenteeism. In addition, lifestyle-related disorders such as obesity and the hectic schedule of individuals increase the risk of spinal disorders. Therefore, obesity can lead to the development of other spinal disorders, which, in turn, increases the number of treatment surgeries and ultimately leads to a rise in the number of interoperative neuromonitoring procedures. As it is an important aspect of vascular surgeries, the increase in the prevalence of cardiac disorders would lead to a rise in the number of vascular surgeries, which, in turn, would fuel the market growth.

Furthermore, according to the CDC, in 2021, one or more chronic diseases, such as diabetes, cancer, heart disease, and stroke, affected six out of ten Americans. In addition, the incidences of diabetes, atherosclerosis, strokes, hypertension, and other chronic disorders arise rapidly, due to changes in lifestyle habits, such as unhealthy dietary habits, lack of physical activity, and smoking. Therefore, the increasing prevalence of diseases would lead to a rise in surgical treatment procedures, which, in turn, fuels the market demand.

The electromyography (EMG) category accounted for the largest revenue share in 2021, and it is expected to further grow with a substantial CAGR in the coming years. This is due to its better accuracy in identifying potential neurological damage than other monitoring modalities, the rising demand for minimally invasive surgeries, the ongoing development and mounting demand for portable EMG devices to reduce increasing hospital and healthcare-related costs, and the surging healthcare expenditures.

North America accounted for the largest revenue share, of around 51%, in 2021, and it is further expected to maintain its market dominance during the forecast period. This is ascribed to the high prevalence of neurological disorders, the increased adoption rate of IONM, the presence of highly sophisticated healthcare infrastructure, the favorable reimbursement framework for such advanced neuromonitoring solutions, and the increased patient awareness about neurological monitoring.

Furthermore, the industry is driven by the presence of a large number of hospitals and industry players and the increasing number of surgeries in the region. Moreover, awareness among people about the advanced technology of neuromonitoring, and initiatives taken by several organizations to increase professional education for such technology propel the North American market growth.

The U.S. contributes the majority of revenue to the regional market, owing to the presence of several neurological facilities in the nation, which actively promote the usage of such monitoring during surgeries and are attempting to fill a staffing deficit in order to address the increased demand. Additionally, comprehensive standards help implement neuromonitoring during surgeries, which improves outcomes and benefits for both patients and hospitals.

On the other hand, the APAC intraoperative neuromonitoring market will register the fastest growth during the forecast period. This high growth can be attributed to a large number of healthcare reforms, the increasing demand for advanced healthcare services in emerging economies such as India and China, the surging prevalence of chronic disorders, and the rising elderly population in the region.

Furthermore, the high population base, the presence of unmet medical needs, the increase in disposable incomes of people, the growth in medical tourism, and technological advancements in the healthcare sector are boosting the regional market. 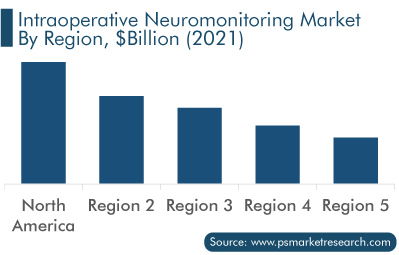 In addition, Europe accounted for the second-largest revenue share in 2021 and is further expected to maintain its position during the projected period. This is ascribed to the bourgeoning number of surgeries in the EU, the well-developed healthcare sector, advancements in technologies that offer high precision, and the growing elderly population, in the region.

Moreover, developed economies, such as Germany, Italy, the U.K., and Spain, are highly contributing to the regional market share. This is due to the upsurge in the need for minimally invasive surgeries, the increasing number of vendors, and the rising demand for ambulatory care services and awareness programs, in these countries.

Key Players in the Intraoperative Neuromonitoring Market Are:

Based on Product & Services

Based on Source Type

Frequently Asked Questions About This Report
What was the size of the intraoperative neuromonitoring market in 2021?+

The intraoperative neuromonitoring market size stood at $3.23 billion in 2021.

What will be the growth rate of the intraoperative neuromonitoring market during the forecast period?+

During 2021–2030, the growth rate of the intraoperative neuromonitoring market will be around 4.8%.

Which is the largest area by source type in the intraoperative neuromonitoring market?+

Insourced is the largest area by source type in the intraoperative neuromonitoring market.

What are the major drivers for the intraoperative neuromonitoring market?+

The major drivers of the intraoperative neuromonitoring market include the increasing R&D expenditure, the growing medical tourism, the mounting technological advancement, the rising population with chronic and neurological diseases, and the surging preference for minimally invasive surgeries across the globe.