The Indian non-solar high-capacity inverter market size stood at $391.3 million in 2021 and is projected to reach $760.1 million by 2030, advancing at a CAGR of 7.7% during 2021–2030. This is attributed to the increasing demand for power backup solutions across industrial, commercial, and residential areas, along with the surging need for inverters in tier II and tier III cities of the nation.

Moreover, the Indian solar high-capacity inverter market size is projected to reach $1,199.0 million by 2030 from $426.0 million in 2021, surging at a growth rate of 12.2% during the forecast period. This is due to the rise in the usage of solar power for several applications, along with various government initiatives for promoting renewable power sources, especially solar energy, and the country has a vast source of solar energy due to its geographical location.

Rapid advancements in the solar energy sector in terms of power generation and utilization are contributing to an increase in the number of solar PV installations for a variety of applications in India. The rising adoption of renewable energy in the country enhances the Indian renewable power inverter market. For instance, the country had a renewable energy capacity of 150 GW in November 2021, comprising solar (48.55 GW), large hydro (46.51 GW), wind (40.03 GW), bio-mass (10.62 GW), nuclear (6.78 GW), and small hydropower (4.83 GW). Also, India has planned to achieve a renewable energy capacity of 450 GW by 2030. 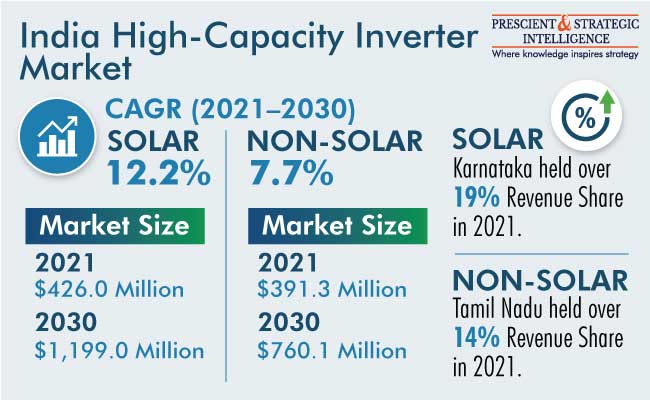 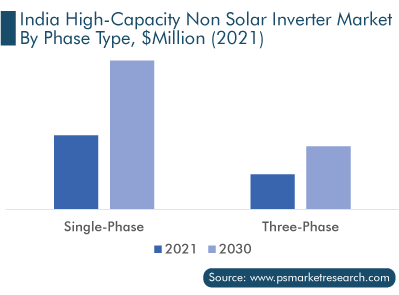 Solar high-capacity inverters are largely used in the utility & power sector, which contributed 91.7% of the market revenue in 2021, and the category is projected to depict significant growth during the forecast period, rising at a CAGR of 12.3%, as these inverters are largely used in solar power plants. Moreover, the Government of India targets to increase its solar power capacity to 288 GW by 2030 from around 50 GW cumulative installed solar capacity as of February 28, 2022, which will result in an increase in the demand for solar high-capacity inverters. 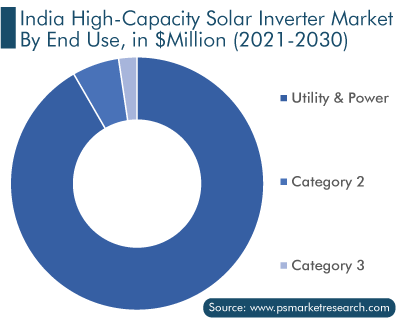 In 2011, the Indian government introduced new policies for solar energy. Karnataka has supported the policies by initiating Arunodaya Programme, under which a 14MW solar PV plant was made. As a result of which, in 2021, 20% of Karnataka’s daily power requirements were fulfilled by solar energy. Moreover, the state has the largest installed capacity of solar power in the country, with 7,346 MW, and the biggest solar plant is located in Pavagada, Tumakuru.

Moreover, Karnataka has a suitable geographical location for solar energy and a large number of key players investing in this state. Also, the suitable earth and sun movements, the appropriate tilt of the earth’s rotational axis, and the favorable atmospheric attenuation help it in getting the high intensity of solar energy. Hence, Karnataka is the largest solar high-capacity inverter market in the country, accounting for an 18.7% revenue share in 2021.

Tamil Nadu is the largest market for non-solar high-capacity inverters in India, accounting for a 14.3% revenue share in 2021. This is due to the presence of the largest wind farm situated in Kanyakumari, which delivers 1,500 MW power supply, and the state has around 3,000 wind turbines. Also, Tamil Nadu has a high potential for small windmills, as the area is geographically favorable for wind energy, and the state government has formulated favorable policies for small windmills. These factors attract players to invest in the state, which, in turn, drives the market growth.

In April 2022, Delta Electronics Inc. launched an optical storage and charging bi-directional inverter (BDI), which is an all-in-one solution that integrates the alteration and control of DC and AC power for rooftop solar power, household electricity infrastructure, EV charging, and energy storage batteries.

Top Players in the Indian High-Capacity Inverter Market Are: