The Indian EVSE market is expected to witness the fastest growth in the northern region, during the forecast period. This would be due to the poor air quality index in most of the cities here, coupled with the government initiatives supporting the adoption of EVs and installation of EVSE. 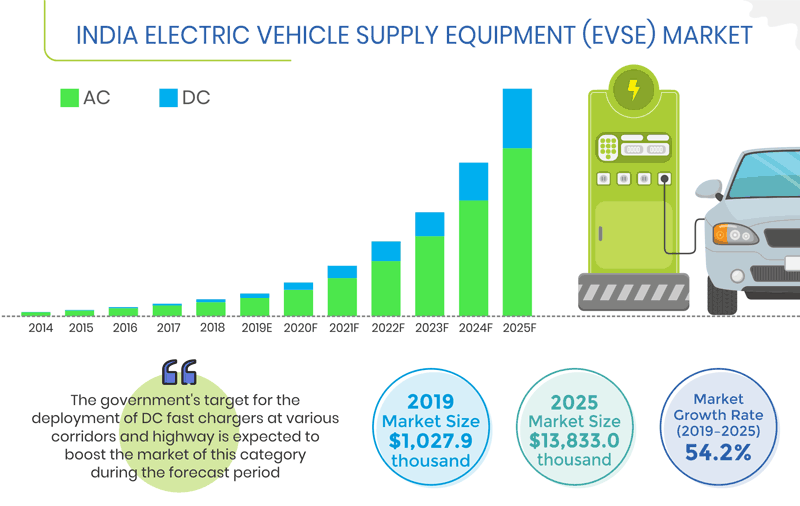 The growing adoption of electric vehicles (EV) is the most important factor contributing to the growth of the Indian EVSE market. From 2018 to 2019, the total EV sales increased by 32.0%, from around 576,000 units to over 760,000 units. The major reason for the increasing adoption of EVs is the government support for these green vehicles and growing public concerns for the environment, specially in tier-1 cities. In 2018, as per the World Air Quality Report by IQAir North America Inc., India ranked third in air pollution ratings, with 72.5 µg/m³ particulate matter (PM) 2.5 concentration. As per the report, seven of the world’s top 10 most polluted cities and 22 of the top 30 cities are in India. Since the transportation sector is the major source of air pollution, the government at the central and state levels is promoting EVs. With the expected growth of EV sales, the demand for EV charging stations is also expected to increase.

The rising adoption of charging stations powered by solar energy is expected to create numerous growth opportunities for the market players. With the increasing use of EVs, there is a need to harness a more-sustainable energy source to run the vehicles, and the sun is a potential source of renewable energy for charging systems. India plans to attain renewable energy generation capacity of 175 gigawatts (GW) by 2022, of which 100 GW would be in the form of solar energy. Thus, the use of unconventional sources of energy for charging electric vehicles is expected to generate new growth opportunities for the players in the market. 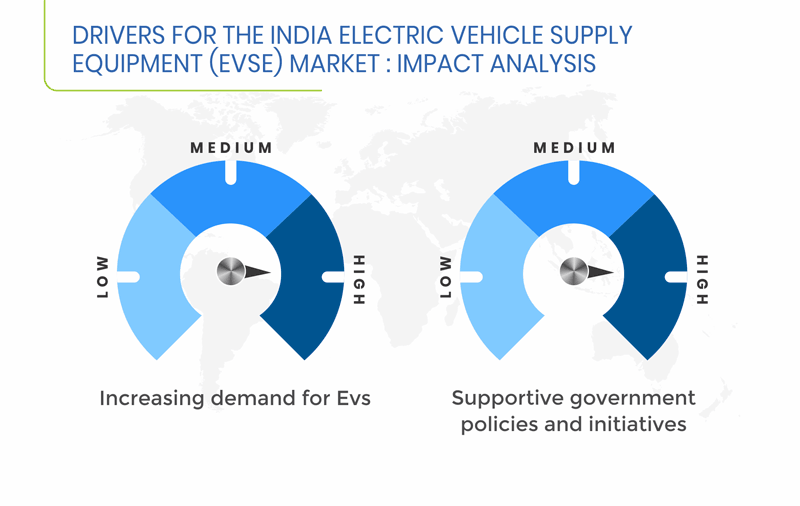 Based on type, AC chargers dominated the Indian EVSE market during the historical period (2014–2019), because of their lower cost of production, installation, and operation. Due to their lower installation and operational costs, cars are usually much cheaper to charge at AC stations, thereby making them more popular for day-to-day charging.

On the basis of application, public charging stations are projected to be the faster growing category in the Indian EVSE market during the forecast period. The supportive government plans and monetary incentives to create a fast-charging network in the country are expected to boost the demand for public charging stations. In addition, the entry of new players, such as MG Motors India Pvt. Ltd. and Hyundai Motor Company, and their ongoing partnerships with the EVSE manufacturers in the country are also expected to benefit the market during the forecast period.

Geographically, western India was estimated to hold the major Indian EVSE market share in 2019. This is attributed to the growing support of the government of different states in this part of India, especially Gujarat and Maharashtra. Additionally, the high per capita income in this region is also a major factor behind the growth of the EV market, and, in turn, the EVSE market, here. Moreover, the presence of major EV and EV component manufacturers in this region is driving the demand for EVSE in this region.

In recent years, the major players in the Indian EVSE market have undertaken several strategic measures, such as partnerships and product launches, and secured client wins to gain a competitive edge in the market. For instance, in November 2019, Magenta Power Pvt. Ltd. partnered with Lodha Group, a real estate developer, for EV charger installation. Under the terms, Magenta will install its charging stations, named ChargeGrid Pro, at the real estate projects of Lodha in Mumbai.

Additionally, in May 2019, Panasonic Corporation announced plans to set up mini-charging stations, mostly at parking spaces, malls, fuel outlets, and specially-developed zones, across cities such as Pune, Bangalore, Chennai, Hyderabad, Noida, and Delhi. With this charging infrastructure network, the company is planning to reach EV owners/users, logistics companies, and fleet owners and help them manage their fleets more efficiently.