The electric vehicle fast-charging infrastructure market revenue was $3,240.7 million in 2021, and it is expected to reach $18,909.8 million by 2030, at a CAGR of around 21.7% during the forecast period. This will be due to the rising EV sales throughout the globe, itself owing to the growing need for zero-emission transportation. 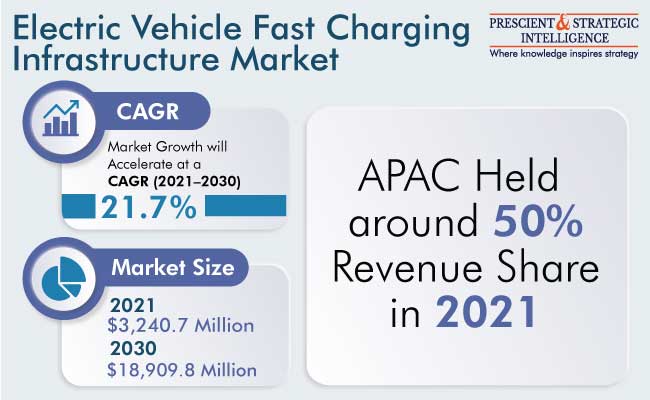 Public charging accounted for the larger share in the market, and it is expected to witness growth at a CAGR of around 22% between 2021 and 2030. This will be owing to the widespread installation of public fast chargers to facilitate EV adoption. Various OEMs and EV network operators are setting up public fast chargers at retail and hospitality facilities, parking lots, government offices, roads, gas and fuel stations, and other areas.

For instance, in the U.S., the Bipartisan Infrastructure Law (BIL) has allocated over $7 billion for the development of charging infrastructure for electric vehicles. The objective is to deploy 500,000 public chargers by 2030 that are compatible with all the technologies and vehicles operational around the country.

The increasing adoption of electric cars has emphasized the need for charging infrastructure development. Major electric vehicle markets, such as China, the U.S., and Germany, are spending heavily on research and development, for easier and more-efficient EV charging techniques. For instance, in October 2021, GM announced plans to invest more than $30 billion to achieve the sales target of over one million electric vehicles by 2025. In addition, by 2035, the corporation intends to be entirely electric.

Similarly, Ford expects to raise its EV production to 600,000 units per year by 2023. Additionally, by 2030, it has planned to make half its vehicle offerings electric. Other firms, such as Tesla, Nissan, and BMW, have also made substantial improvements and plans for meeting the future EV demand. These policies and investments are likely to increase the demand for EV fast-charging systems over this decade.

The Vehicle-to-grid (V2G) EV charging technology permits the electrical energy to flow in both the directions between the power grid and plug-in electric vehicles. Moreover, this technology also permits the EVs in storing and discharging the unused energy to the grid which can improve the performance of the electrical component along with adding value to the electric vehicle owners. Therefore, the surging technological advancement will provide new market opportunities for the market’s growth rate.

GB/T is the highest-revenue-generating connector type in the market, accounting for around $1.2 billion revenue in 2021, which is projected to grow at a CAGR of more than 20.0% during the forecast period. This is because the GB/T DC fast-charging standard supports faster charging with up to 250 kW of power.

Furthermore, superchargers are expected to witness significant development throughout the forecast period since they are suited for long-distance travel and intended to charge the Tesla swiftly. Because Tesla Inc. holds a substantial chunk of the global electric car market, superchargers might offer market players lucrative opportunities. Additionally, due to the price drop in Tesla models, they have become preferred among EV customers, which is, in turn, driving the supercharger market. 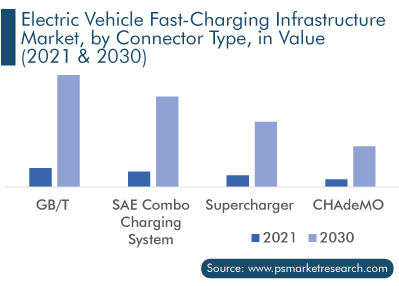 EV fast chargers of <100-kW power are expected to dominate the industry through the forecast period, with the category witnessing a growth rate of more than of 21% between 2021 and 2030. This is because fast chargers with an up to 100-kW power output are less expensive and can charge an EV in 1–2 hours. They are generally installed at shopping malls, retail shops, and hotels.

Another key factor supporting <100-kW charger demand in the electric vehicle fast-charging infrastructure market is the higher requirement for energy by the higher-kW chargers and the lack of energy, often due to the unreliable grid connectivity, to support such technology. In addition, majorly public charging networks do not require a power output of over 100 kW for customer satisfaction.

APAC region held the largest market share over the past few years, and it would grow at a significant CAGR, of around 22.0%, during 2021–2030. This is due to the region's strong preference for clean transportation, which offers a diverse set of prospects for network operators. The region's rapid market growth may be ascribed to an increase in government regulations and investments and rise in the acceptance of zero-emission automobiles. This will help in bolstering the electric vehicle fast-charging infrastructure market growth as the number of DC fast chargers is grossly low compared to the number of EVs already on the roads.

Furthermore, EV fast charger demand in the North American region is predicted to increase significantly throughout the forecast period. Government measures to improve the charging infrastructure have contributed to the region's rapid market expansion. For instance, the U.S. government stated in 2022 that it will give roughly $5 billion over five years to deploy thousands of electric car charging stations. 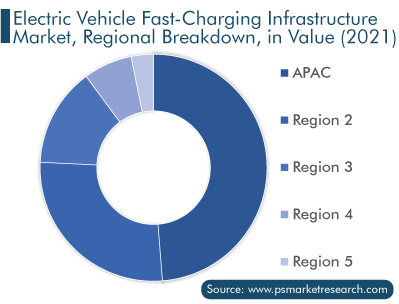 The market has the presence of several key players, who, in recent years, have been involved in various strategic developments in order to stay ahead of their competitors. For instance:

Based on Connector Type

Based on Charging Power

Frequently Asked Questions About This Report
What is the current size of the EV fast-charging infrastructure market?+

How much is the CAGR of the EV fast-charging infrastructure industry?+

Who are the winners in the global EV fast-charging infrastructure market?+

What are the biggest EV fast-charging infrastructure industry opportunities?+

The biggest opportunities for the players in the EV fast-charging infrastructure industry are the V2G technology and superchargers.

Which is the most-popular connector type in the EV fast-charging infrastructure market?+

The market for EV fast-charging infrastructure witnesses the highest usage of the GT/B connector type.