The global RFIC market generated revenue of $34.2 billion in 2015 and is expected to register a CAGR of 6.7% during the forecast period (2016–2022). The market is mainly driven by the growing demand for higher-bandwidth wireless communication.

The growing demand for consumer electronics has led to a high-volume production of RFICs in recent years, thereby driving the RFIC market across the world. The improvements in the sensing capacity, along with a reduction in the average cost and package size of RFICs, has led to their wide adoption in consumer electronics. Devices such as smartphones and smart wristwear require small and thin-package RFICs, as these have to be integrated in these devices, which are themselves compact. The miniaturization of consumer products in recent years has led to significant innovations in the packaging technology of RFIC products. 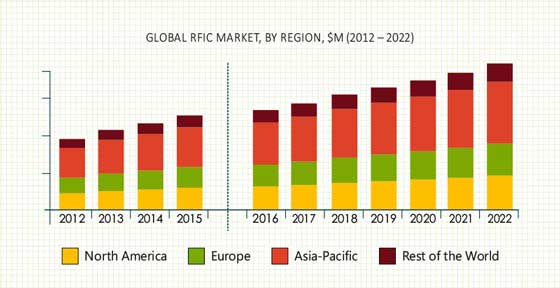 The RFIC market is expected to grow significantly due to the increasing internet penetration in developing countries. RFICs can be used in any integrated electrical circuit operating in a frequency range suitable for wireless transmission. Internet penetration in developing countries, such as India, China, and Nigeria, has increased significantly in recent years to become an important social and economic platform. The government in these developing countries is also investing in internet infrastructure. For instance, in July 2015, Government of India started the ‘Digital India’ initiative to digitize various processes in the country by increasing the internet connectivity. The penetration of wireless internet in these countries is expected to increase significantly owing to the swift development of wireless telecom infrastructure in semi-urban and rural areas.

With increased penetration of the internet, network service providers are focusing on higher bandwidth and speed, thereby resulting in the growth of the worldwide RFIC market. Advancements in internet of things (IoT) have significantly contributed to the growth of the high-bandwidth wireless communication market, globally. In the last few years, the deployment of 4G wireless communication has grown significantly in Western Europe. As of the 3rd quarter of 2015, 4G network in Western Europe was accessible by around 75.0% of the total population. Moreover, the significant growth in 4G wireless communication standards is also expected from the developing countries of Asia-Pacific (APAC), such as China and India, owing to the growing demand for higher-bandwidth internet connection.

Geographically, the APAC region accounted for the largest share in the RFIC market in 2015. The growing market for consumer electronics, such as televisions (TV), smartphones, laptops, and washing machines, in the region has increased the demand for RFICs. The Rest of the World (RoW) market is expected to advance at a considerable CAGR during the forecast period, owing to the high demand for such devices from Africa and Latin America (LATAM).