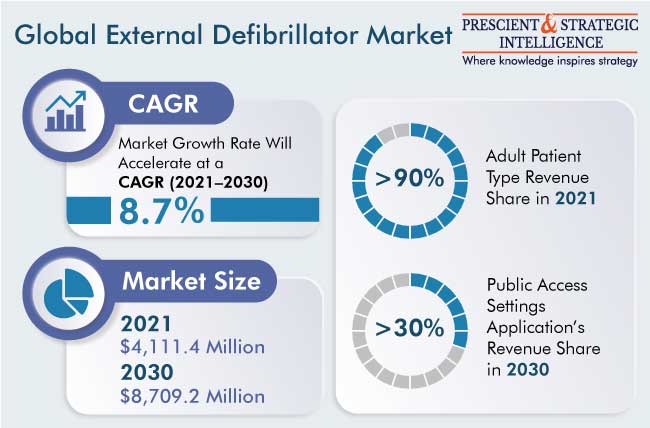 This market has a promising future, as both production and demand are expected to rise over the next decade. Regulatory policies in emerging economies, such as India and Brazil, are facilitating the market, since these countries are more adaptable and business-friendly with less stringent regulations. Defibrillator producers are focusing even more on improving their presence in emerging economies, as competition in developed countries heats up, and taking advantage of significant growth potential and sales for defibrillators in developing nations. Moreover, these economies offer lucrative opportunities to players operating in the market. Below are some highlights of developing areas driving the market:

In 2021, external defibrillators used for adult patients accounted for over 90% of the revenue share. With the increasing number of adult patients in comparison to pediatric patients all over the world, the risk of CVDs is increasing. Adults are more prone toward cardiac diseases due to unhealthy lifestyles. Moreover, as age increases, the immune system of an individual started facing problems while fighting diseases. Moreover, each year, approximately 0.1% of the U.S. population experience a medical services-assessed, OHCA. The European region has a similar incidence ranging from 0.04% to 0.1% of the population.

The public access settings category dominated the market in 2021, with more than 30% revenue share. The rise in the incidence of SCAs and mandate availability of automated external defibrillators in public access settings are key factors contributing to the growth of the market in this end-user category. For example, the U.S., as well as a number of European and APAC countries, has established legislation requiring the installation of these devices in public spaces. These devices have been implemented in public locations such as community centers, schools, stadiums, health clubs, recreation centers, shopping centers, transportation centers, government buildings, airlines, and offices, as a result of this.

In 2021, North America held the majority revenue share, of around 60%, in the market. The market in North America is mainly driven by the rising healthcare spending, increasing prevalence of CVDs, surging geriatric population, and growing awareness of the benefits of external defibrillators in the event of VF and pulseless ventricular tachycardia.

For instance, the U.S. government spends a significant portion of its GDP on healthcare every year. According to the National Health Expenditure Accounts (NHEA), the country’s healthcare spending increased to 9.7% (around $4.1 trillion) in 2020, from 4.3% in 2019. Furthermore, the NHEA states that the country’s healthcare spending is projected to reach $6.0 trillion by 2027, and it is expected to grow at a CAGR of 5.5% during 2022–2030.

Besides, conferences, national programs, and other government initiatives for creating awareness on CVDs are expected to positively impact the market in the North American region. For instance, the 28th International Congress on Cardiology and Medical Interventions took place on October 30–31, 2020, in Vancouver, Canada.

The increasing population of elderly people is one of the key factors driving the global external defibrillator market. Globally, the U.S. has the third fastest-growing geriatric population, after Japan and China. According to the United Nations Department of Economics and Social Affairs, there were around 727 million persons aged 65 years or above all over the world in 2020, and this number is projected to be double by 2050, reaching more than 1.5 billion geriatric population. The share of the older population is expected to increase from 9.3% in 2020 to 16.0% by 2050. With the increase in age, elderly people tend to become susceptible to chronic diseases, majorly CVDs. 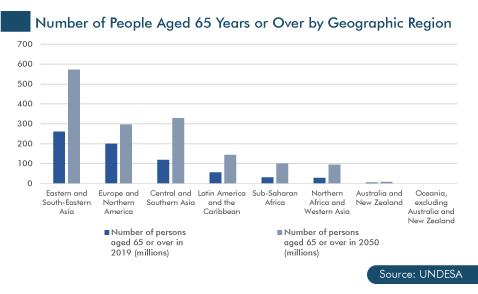 SCA is the major cause of mortality of the elderly in the U.S., owing to the high prevalence of coronary heart disease (CHD), systolic dysfunction, and congestive heart failure (CHF). Also, there is a direct co-relation between SCA and age (i.e., the incidence of SCA increases with age). Thus, with the surging number of elderly people, the demand for external defibrillators is increasing, globally.

The major trend observed in the market is that the major companies are involved in product launches and acquisitions in order to stay ahead of their competitors. For instance:

Based on Patient Type

Frequently Asked Questions About This Report
How much will the external defibrillator market value in 2030?+

Which is the most-significant end user in the external defibrillator industry?+

Public access settings are the largest category under the end-user segment of the external defibrillator industry.

What are the key drivers for the external defibrillator market?+

What is the regional scenario in the external defibrillator market?+

Which are the key strategic measures among players in the external defibrillator market?+