The defibrillator market value was $9,621.2 million in 2019, and the industry is predicted to progress at a CAGR of 7.2% from 2020 to 2030. The growing prevalence of cardiac diseases, increasing number of strategic development activities among key players, and rapid advancements in the defibrillator technology are the major factors fueling the expansion of the market.

The COVID-19 pandemic is severely hampering the progress of the defibrillator industry. With the announcement of lockdowns in several countries for mitigating the spread of the infection, the sales of defibrillators have fallen drastically, and the future growth predictions for the industry have changed completely. The market is predicted to progress only after the lifting of the lockdowns and restrictions and the resumption of export and import activities. 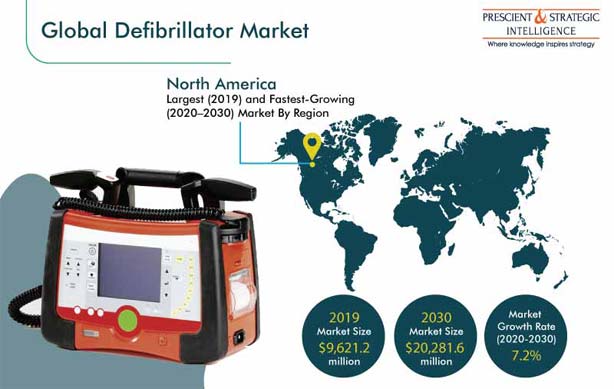 The ICDs category held the larger share in the market in 2019, under the type segment. This category is also predicted to dominate the market from 2020 to 2030, primarily because of the increasing number of product launches and surging focus of industry players on developing technologically advanced ICDs. For example, the United States Food and Drug Administration (USFDA) granted its approval to the Gallant ICD and cardiac resynchronization therapy defibrillator devices developed by Abbott Laboratories, a major player in the defibrillator market, in July 2020. These implantable devices are equipped with Bluetooth connectivity, which enables the streaming of data to a physician, thereby making closer patient monitoring possible.

The adult patient type category held the larger share in the market in 2019, and it is predicted to demonstrate the faster growth in the future. This is credited to the fact that the occurrence of sudden cardiac arrest (SCA) in the adult population is significantly higher than in the pediatric population. As per the statistics published by the American Heart Association (AHA) in the Heart Disease and Stroke Statistics – 2018 report, out-of-hospital cardiac arrests (OHCA) recorded an incidence of 347,322 and 7,037 in adults and pediatric patients, respectively, in 2018.

The direct distribution channel category dominated the market in 2019, and it is predicted to hold the larger share in the forthcoming years. As defibrillators are life-saving machines, customers usually prefer buying them from manufacturers, over purchasing them online. This leads to faster product deliveries by manufacturing companies, which, in turn, results in better long-term relationships between customers and manufacturers. Moreover, this method helps manufacturers in the defibrillator market avoid sharing their profits with third-party distributors.

The public-access settings end user category is predicted to demonstrate the fastest growth in the upcoming years. This is attributed to the growing usage of technologically advanced products, rising incidence of cardiovascular diseases, increasing number of conferences and public awareness-raising campaigns being conducted by private and public organizations, and rapidly improving healthcare infrastructure in several countries.

North America Expected To Be Largest and Fastest-Growing Region

Geographically, North America dominated the market from 2014 to 2019, and this trend is predicted to continue in the future. The key factors driving the market for defibrillators in this region are the existence of major industry players, soaring investments by public and private organizations for research and development (R&D) on defibrillators, presence of favorable reimbursement policies that allow patients to afford the expensive healthcare and defibrillators, and a developed healthcare infrastructure.

Furthermore, many regional governments are promoting the usage of such resuscitation devices, thereby fueling the expansion of the defibrillator market in the region. For example, in the U.S., the federal government spends a huge portion of the country’s gross domestic product (GDP) on healthcare annually. According to the National Health Expenditure Accounts (NHEA), the healthcare expenditure of the U.S. was $3.5 trillion in 2017, registering an increment of 3.9% from the previous year. The organization also estimates that the country’s healthcare expenditure will increase to $6.0 trillion by 2027, recording a CAGR of 5.5% from 2018 to 2027. 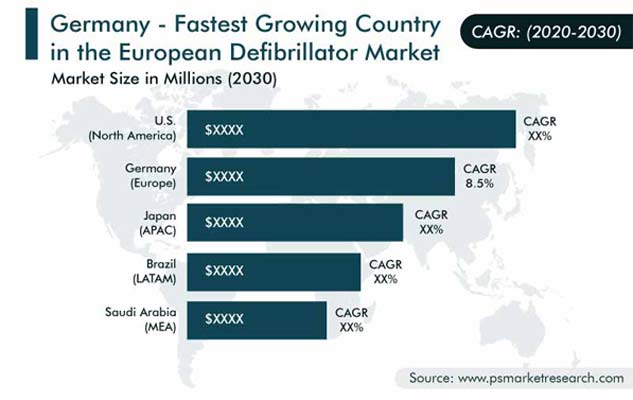 The deployment of automated external defibrillators (AEDs) in public places, such as colleges and schools, airports, shopping centers, leisure centers, malls, and railway stations, on account of the growing public awareness about the ability of these devices to save lives, is quickly becoming a major trend in the market for defibrillators. As these devices can be operated by anyone during emergency situations, they are also known as public-access defibrillators (PADs).

Many organizations are ensuring that PADs are installed within their premises, so that emergency medical care can always be provided to people. In the U.S., many organizations are deploying PADs within their premises and in the surrounding areas because of the rising prevalence of SCA, a major driver for the defibrillator market in the country. Additionally, the Sudden Cardiac Arrest Foundation, which is a national community-benefit organization, allocated funds to various schools for AED procurement, under its “You Can Save a Life at School AED Grant” program, in February 2016. 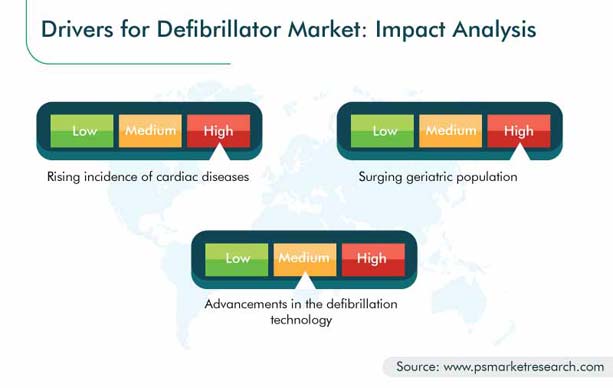 The growing adoption of a sedentary lifestyle, increasing consumption of junk and high-calorie food, surging obesity levels, and rampant smoking habits are fueling the incidence of various heart-related ailments in people of all age groups. This is subsequently pushing up the requirement for medical devices and systems, which is, in turn, driving the advancement of the market. As per the World Health Organization (WHO), cardiovascular diseases (CVDs) are the primary cause of death around the world. In 2016, they claimed the lives of nearly 17.9 million people, accounting for 31% of the total deaths across the world. Strokes and heart attacks were responsible for 85% of these deaths.

Similarly, as per the report Heart Disease and Stroke Statistics—2017 Update published by the AHA, in the U.S., one out of every three deaths is caused due to CVDs. This means that 800,000 deaths are caused because of CVDs in the U.S. every year, which reflects a strong growth potential for the defibrillator market in the near future. Coronary heart disease (CHD), strokes, and heart failure are responsible for the majority of these deaths.

With increasing age, people become vulnerable to various chronic diseases, such as CVDs and are, therefore, more likely to need emergency or regular medical care. Because of this reason, the surging global geriatric population is positively impacting the demand for defibrillators, which is, in turn, driving the sales of defibrillators. As per the “Causes and Prevention of Sudden Cardiac Death in the Elderly” article published in the Nature Reviews Cardiology journal in 2013, in the U.S., SCA was a prominent cause of death among geriatric people due to the high incidence of systolic dysfunction, congestive heart failure (CHF), and CHD in them. The article also mentions that the chances of SCA increase with age, meaning there is a direct correlation between age and SCA.

Several advancements have been made in the defibrillation technology over the past few years. For example, the LifeVest developed by ZOLL Medical Corporation is a lightweight defibrillator that can be easily worn by individuals at risk of SCA. This device regularly monitors the heart rhythm of the patient and produces a shock for restoring the normal heart rhythm when it detects any abnormality in it. Furthermore, unlike the conventionally used ICDs available in the defibrillator market, the modern devices don’t require the implantation of a separate pacemaker into patients. These technological advancements are fueling the progress of the market because they can potentially lengthen people’s lives and also offer them convenience.

Product Approvals Have Become Major Strategy to Expand Consumer Base

In recent years, players in the defibrillator industry have engaged in strategic developments, such as product launches, in order to stay ahead of their competitors. For instance: 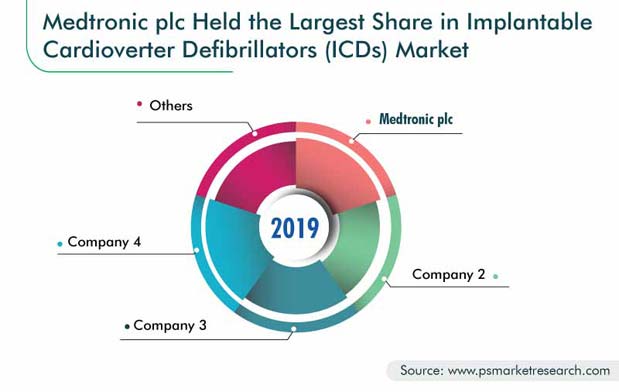 Some of the Key Players in the Defibrillator Market include:

The defibrillator market report offers comprehensive market segmentation analysis along with market estimation for the period 2014–2030.

Based on Patient Type

Frequently Asked Questions About This Report
Which factors will add to the size of the defibrillator market?+

Which system type registered the highest defibrillator industry sale in 2019?+

Implantable cardioverter defibrillators (ICDs) registered the highest sales in the defibrillator industry in 2019.

Which countries are included in the defibrillator market report?+

What is the character of the defibrillator industry?+

The defibrillator industry is fragmented in nature.

What is the key strategic development in the defibrillator market?+

The major strategic development in the defibrillator market is product launch.