The global exoskeleton market size was $290.3 million in 2019, and it is expected to reach $6,957.9 million in 2030, witnessing a CAGR of 35.9% during the forecast period (2020–2030). The major factors behind the growth of the market are the high number of spinal cord injuries (SCIs) and stroke cases, increase in healthcare expenditure, surge in the geriatric population, increase in these products’ penetration in industrial and military operations, and growth of job opportunities for disabled people.

Due to COVID-19, the market witnessed a negative impact across the globe, mainly during the first two quarters of 2020. The COVID-19 situation forced thousands of companies supplying raw materials to throttle down or temporarily stop their activities in China, the U.S., Germany, and several other countries. This has impacted the production of the raw materials and components required for the development of exoskeletons. In addition, the demand for exoskeletons also decreased during the first two quarters of 2020, owing to the job and financial losses for customers and closure of orthopedic and physical rehabilitation centers around the world. 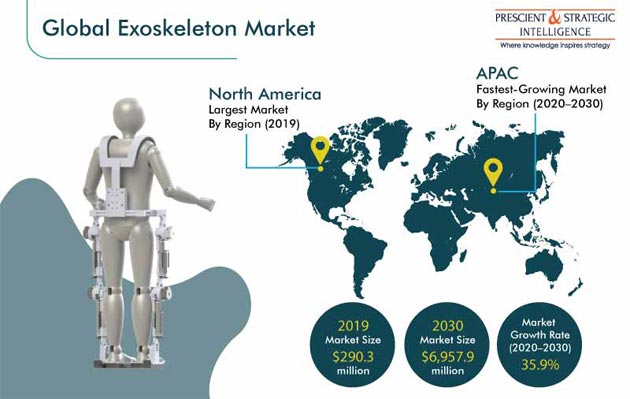 On the basis of component, the market is categorized into hardware and software. The hardware category held the larger share in the exoskeleton market in 2019, due to the fact that exoskeletons comprise various hardware components, such as actuators, sensors, and powered systems. Additionally, passive exoskeletons are majorly constructed with hardware parts, which further supports the dominance of this category on the market.

On the basis of type, the market for exoskeleton is classified into powered and passive categories. Powered exoskeletons use batteries, electric cables, motors, and connections to run sensors and actuators through a control system, to allow for the movement of body parts or limbs and provide high strength and endurance, thus becoming popular among various end-users. Therefore, the category is expected to witness the higher CAGR during the forecast period.

Based on mobility, the market is bifurcated into stationary and mobile. The mobile bifurcation is projected to advance at the higher CAGR during the forecast period in the market. Mobile exoskeletons are the movable or flexible type of exoskeleton devices, with which the user, unlike the fixed exoskeletons, can move outside the premises. Thus, the increasing number of healthcare settings is generating a high demand for mobile exoskeletons for the treatment of patients, globally.

Based on body part, the market is categorized into lower extremities, upper extremities, and full body. Of these, the lower extremities category held the largest share in the exoskeleton market in 2019. This was mainly on account of the high number of exoskeleton devices available in this category, rise in the prevalence of spinal and leg injuries affecting the lower body parts, and growth in the need for improving the mobility capability of injured patients.

On the basis of technology, the market is categorized into electric actuator, hydraulic, fully mechanical, and pneumatic. Among these, the electric actuator category is expected to hold the major share throughout the forecast period, due to the fact that electric actuators are more effective in a majority of applications, which is why they are widely used in several exoskeleton devices.

Among all the end users of exoskeleton devices, the healthcare category garnered the largest share in the market for exoskeleton in 2019. This was mainly due to the large number of healthcare settings, such as rehabilitation and clinical care centers, globally, which require exoskeletons for treatment on a daily basis.

The North American region accounted for the major share in the exoskeleton market in 2019, and it is expected to continue to dominate it throughout the forecast period. The growth of the North American market is mainly driven by the rising usage of exoskeletons by military personnel, heavy usage in the healthcare sector, increasing workforce of disabled people, and high availability of these products in the region.

Globally, APAC is expected to advance at the highest CAGR during the forecast period in the market. The robust growth of the market of the region would be primarily due to the surge in the use of exoskeletons in the medical field and rise in the geriatric population. The older population is rapidly increasing, which has become a major reason behind the rising prevalence of orthopedic diseases and disability. Aging leads to the lowering of the bone density and fragile bones, thereby resulting in a higher risk of fractures.

Technologically advanced features, such as artificial intelligence (AI), robotics, and cloud connectivity, and new designs are increasingly being integrated into exoskeleton devices by the manufacturers, in order to enhance their performance. AI amplifies the human potential as well as productivity. Due to this reason, products equipped with AI are being commercialized and adopted in various countries rapidly. For instance, Bebionic Hand by Ottobock SE & Co. KGaA is designed to handle the daily work. This exoskeleton is equipped with AI applications, and it can be controlled with the Myo app provided by the company. Thus, the deployment of advanced features in exoskeleton products is being observed as a key trend in the market. 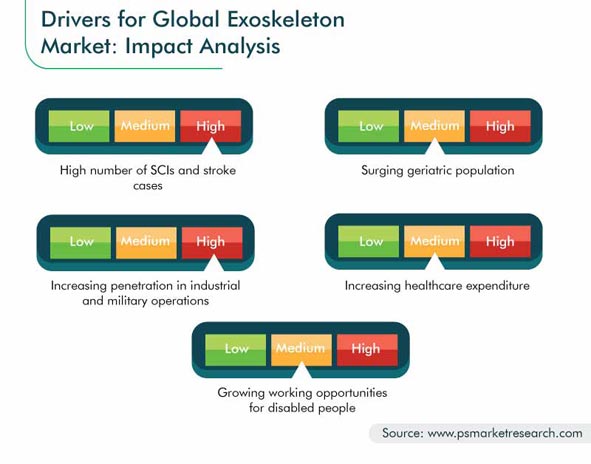 The high number of cases of SCIs and stroke are generating a high requirement for exoskeletons in various healthcare settings, such as rehabilitation centers, and driving revenue for the players in the market for exoskeleton. Exoskeletons in the healthcare industry help paralyzed patients walk again. For instance, in 2019, according to the NSCISC, there are approximately 54 cases per one million people, or about 17,730 new SCI cases, each year in the U.S. Furthermore, the average estimated number of people with SCIs living in the U.S. is 291,000, with individual estimates ranging from 249,000 to 363,000.

According to the World Population Ageing 2019 report by the UN, globally, there were 703 million persons aged 65 or above in 2019, and this number is expected to increase to 1.5 billion by 2050. Hence, the rapidly growing geriatric population is offering opportunities to the market players to sell their devices to various healthcare settings. The ability of these products to provide physical strength to the geriatric population majorly drives the growth of the market.

Another factor driving the exoskeleton industry growth is the growing healthcare expenditure across the world, which is leading to the increasing investments for the innovation and commercialization of exoskeleton products. According to the World Bank Group, worldwide health expenditure was 9.0% of the gross domestic product (GDP) in 2007, which increased to 9.8% of the GDP in 2017. Moreover, people in developed and developing countries are becoming more aware of the relevance of exoskeletons for chronic and acute orthopedic diseases’ management. Thus, the rising healthcare expenditure is fueling growth in the exoskeleton market.

The global market for exoskeleton is fragmented in nature, with the presence of several key players. In recent years, the major players in the market have taken several strategic measures, such as product launches, partnerships, and facility expansions, to gain a competitive edge.

Key Players in Exoskeleton Market include:

The exoskeleton market report offers comprehensive market segmentation analysis along with market estimation for the period 2014–2030.

Based on Body Part

Frequently Asked Questions About This Report
Which “end-user” category held the largest share in the exoskeleton industry in 2019 and why?+

The healthcare category garnered the largest revenue share in the global market in 2019. This was majorly due to the fact that a large number of healthcare settings, such as rehabilitation and clinical care centers, are present globally and they require exoskeleton devices for the treatment of patients on daily basis.

Which “type” category is expected to witness the higher growth rate during 2020–2030 and why?+

The powered category is expected to witness the higher growth rate during 2020–2030. This is attributed to the rising number of applications of powered exoskeleton devices, as they suit patients of all age groups and are preferred by defense organizations in many developed countries.

In the coming years, which region is expected to see the highest rate of growth in the exoskeleton market?+

The APAC exoskeleton market is expected to grow at the highest rate in the coming years.

What factor will result in the increasing demand for exoskeletons?+

The key drivers responsible for the growth of the global exoskeleton market include the high number of spinal cord injury (SCIs) and stroke cases, increasing healthcare expenditure, surging geriatric population, increasing penetration of exoskeletons in industrial and military operations, and growing employment opportunities for disabled people.