The global electrophysiology market size stood at around $7,076.1 million in 2021, and it will grow at a CAGR of 10.6% during 2021–2030. The major factors driving the market include the surging advancements in technology, the rising need for ablation and diagnostic catheters, and the increasing number of cardiac ablation procedures.

North America led the market in 2021 and it is expected to continue doing so in the coming years as well, owing to the surging prevalence of cardiac arrhythmia, rising number of approvals for electrophysiology devices, increasing need for cardiac ablation procedures, and the presence of key players, in the region. However, the APAC market is predicted to grow at the highest CAGR, of 11.0%, from 2021 to 2030. This can be ascribed to the increase in the frequency of atrial fibrillation, advancements in electrophysiology technology, rise in healthcare expenditure, and growth in the geriatric population. 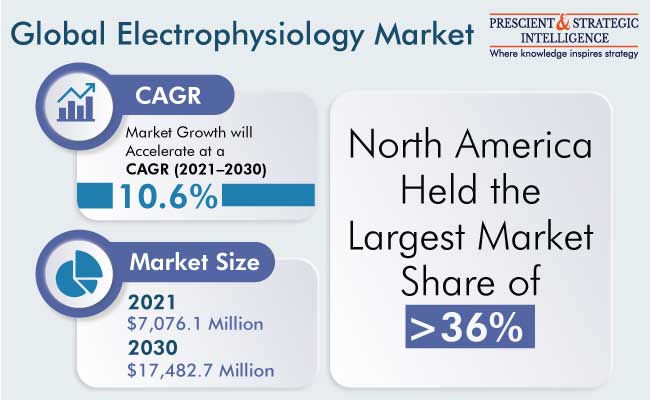 The ablation catheters category held the largest market share in 2021, and it is projected to grow at a significant CAGR, of 10.9%, during 2021­–2030, based on product type. Ablation is a minimally invasive treatment in which defective electrical pathways in the heart are destroyed using catheters. The gadget can be used to eradicate aberrant heart tissue that causes abnormal heart rhythms (cardiac arrhythmia). The most often used ablation catheters are based on radiofrequency and cryoablation technologies, and their usage is likely to grow dramatically as technology advances.

Furthermore, the rise in the geriatric population base results in a variety of arrhythmias such as atrial flutter, atrial fibrillation, and atrioventricular nodal re-entry tachycardia (AVNRT), and increases the cases of cardiac diseases. Thus, the requirement for ablation catheters in the treatment of such disorders has increased in the market.

Moreover, the laboratory devices category contributed 31.4% revenue share to the electrophysiology market in 2021. This is attributed to the increased attention on the launch of technologically sophisticated 3D mapping systems, as well as increased public–private support for the development of innovative electrophysiological recording systems in both established and emerging nations. Also, the increasing frequency of RF ablation treatments, their cost-effectiveness as compared to alternative ablation methods, and the easy availability of laboratory devices are driving the market growth in this category. 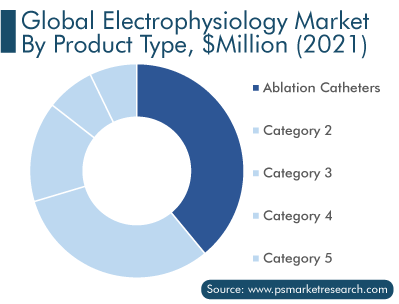 Hospitals and cardiac centers are the largest end users of electrophysiology solutions. Thus, the category held the largest market share in 2021, and it is expected to witness a CAGR of 10.6% during the forecast period. Moreover, this is due to the rise in usage of electrophysiology and Cath laboratories and the increase in the number of ablation procedures in government and private hospitals, across the world.

The availability of cutting-edge facilities for illness diagnosis and treatment, and qualified staff, has assured that hospital-based care is in high demand. Hospitals do more diagnostic and screening operations than other medical institutions, leading to a substantial market share. Furthermore, the usage of electrophysiology devices in these healthcare settings is rising, due to the advent of improved electrophysiological products and the need for minimally invasive procedures.

China Generates the Largest Revenue in the APAC Market

China accounts for the largest revenue share in the APAC market. This is because obesity, heart disease, and other chronic diseases are on the rise, as a result of changing eating habits and lifestyles, rising stress levels, and increasing habitual drinking and smoking in the country. Furthermore, the growing geriatric population, less stringent regulations, rising chronic disease incidences, increasing healthcare spending, surging healthcare reforms for infrastructure development, mounting need for advanced solutions, and increasing focus of key players on evolving markets, are all driving the requirement for electrophysiology solutions in the country.

Germany is leading the European electrophysiology market. The increasing frequency of cardiovascular illnesses in the nation is predicted to raise the demand for electrophysiology devices. Moreover, the rising government and private investments in healthcare infrastructure in the country are expected to proliferate the market growth in the near future. 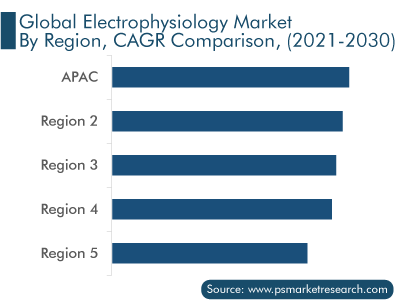 Technological Advancements in Electrophysiology Devices Are Driving the Market

New advancements in electrophysiology devices come with higher success rates, depending on their usage in treating cardiac arrhythmias. The need for technologically superior devices has risen, as a result of improved treatments for enhancing the quality of life. In recent years, the market has grown exponentially. Technological advancements have changed the treatment strategies for cardiac arrhythmias, reducing the burden of heart diseases. In addition, several companies offering technologically advanced electrophysiology solutions, such as Boston Scientific's Rhythmia Mapping System, and improvement in AF ablation therapy through the development of AF FIRM rotor mapping techniques, are improving the ablation therapy outcomes.

Moreover, numerous additional improvements include the development of an irrigated RF ablation catheter for the avoidance of thromboembolic events, as well as advances in cryoablation procedures, such as ArtiCure Inc.'s cryoFORM cryoablation probe, which is useful in the treatment of cardiac arrhythmias. These developments in electrophysiology devices will propel market growth in the future.

Major players operating in the electrophysiology market have been involved in several strategic developments, such as product launches and acquisitions, to remain competitive. For instance:

In October 2021, Boston Scientific Corporation acquired Baylis Medical Company Inc. for $1.75 billion. With this acquisition, the company would expand its structural heart product portfolio to include RF NRG and VersaCross.

In December 2020, Acutus Medical Inc. launched AcQBlate Force Sensing Ablation System after getting the CE Mark in Europe. The system is designed with a commercially available force-sensing, irrigated, gold-tipped RF ablation catheter, which is used for RF ablation and electrophysiology mapping.

Top Manufacturers of Electrophysiology Devices Are:

Based on End Users

Frequently Asked Questions About This Report
What was the size of the electrophysiology market in 2021?+

What will be the growth rate of the electrophysiology market?+

Which is the largest end user of electrophysiology solutions?+

Hospitals and cardiac centers are the largest end users of electrophysiology solutions.

What are the major drivers for the electrophysiology market?+

The major drivers of the electrophysiology market include the surging advancements in technology, the rising need for ablation and diagnostic catheters, and the increasing number of cardiac ablation procedures.