The growth is owing to the increasing consumption of alcohol and drugs. Furthermore, the rising pace of technological advancements and increasing awareness among people about the harmful effects of such substances are driving the growth of the market.

According to the National Center for Drug Abuse Statistics (NCDAS), around 50% of the population of the U.S. has used drugs at least once. The rising consumption of drugs to deal with stress, mental health issues, and high workload are boosting DOA testing activities.

The global drug of abuse testing market has also been growing at a considerable rate due to the increasing drug of abuse testing at organizational levels, high production and trade of these substances worldwide, global increase in road accidents and death rates, initiatives by government and other organizations to reduce drug abuse, and technological advancements in testing methods. 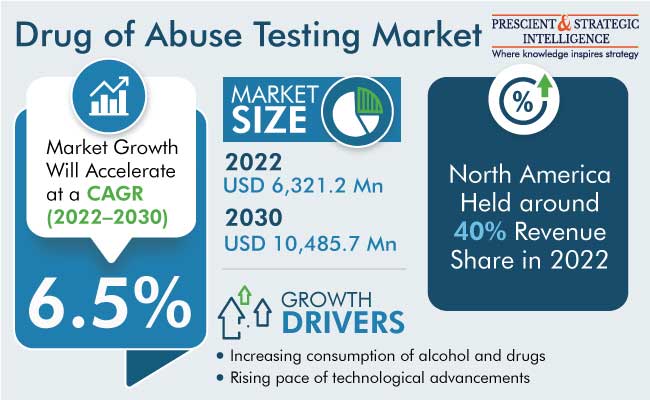 Road accidents are measured in terms of the number of persons injured and dead, whether immediately or within 30 days of the accident. Alcohol and other drugs affect impulse control, motor function, reflexes, judgment, and decision making, which leads to road accidents and, often, death. According to the World Health Organization (WHO), approximately 1.3 million people die every year due to road traffic crashes, and approximately 20 million to 50 million suffer from non-fatal injuries.

According to the 2021 National Survey on Drug Use and Health (NSDUH), in 2021, around 57.8% people aged 12 years and more used tobacco, alcohol, and illicit drugs. Further, 47.5% of them were alcohol consumers, 19.5% took tobacco, and 14.3% used illicit drugs. Additionally, it is well-known that men are more likely to consume drugs and alcohol than women.

Marijuana is found the most commonly, after alcohol, in the blood of drivers involved in road crashes. During investigation, the detection of delta-9-tetrahydrocannabinol (THC), which is marijuana’s mind-altering ingredient and is present in the blood, often takes centerstage. Moreover, if taken in combination with cocaine, alcohol, or benzodiazepines, marijuana may pose a greater risk of road crashes than if the drugs were taken individually.

Hence, the increasing frequency of such adverse events would drive the frequency of drug of abuse tests in the future.

North America dominated the drug of abuse testing market, with a revenue share of around 40%, in 2022, owing to the high R&D investments, presence of global players, growing adoption of technologically advanced solutions, and the efforts of the key companies to come up with newer patents.

In the U.S., approximately 37 million people were drug consumers in 2020, and the rate of consumption is increasing by over 13% every year. Males are consuming more drugs compared to females, and since 2000, almost 1 million drug overdose deaths have occurred in the country. Hence, with the increasing number of fatalities, governments, corporations, and even concerned friends and family members are augmenting their DOA testing efforts.

In this regard, the government of the U.S. has implemented the National Drug Control Strategy. It builds upon the significant actions taken during the Biden Administration's first year to reduce overdose deaths and improve the way the country works to educate people about the harms of intoxicating substances and address both their demand and supply.

The strategy is aimed at building a stronger substance use disorder treatment infrastructure and reducing the supply of illicit substances, by taking a variety of law enforcement actions to undermine the illicit finance networks that make such trade both possible and profitable, thus disrupting criminal organizations. Other major priorities include the expansion of evidence-based harm reduction methods, in order to meet people wherever they are, thus preventing drug use at the initial stages; building a system for rehabilitation and recovery, addressing the various drug policy issues in criminal justice, and enhancing data systems and research that guide drug policy development.

These preventive measures are also to be used among schoolchildren, as various research studies have identified effective strategies to strengthen the mental and emotional development of young people, to prevent initial use. The method are designed to ensure that schoolchildren have access to programs designed to prevent drug use before it starts, focusing on children at a higher risk of use or those who have started using, and, when necessary, providing referrals for treatments and recovery support, to ensure the wellbeing of the nation’s 74 million children. 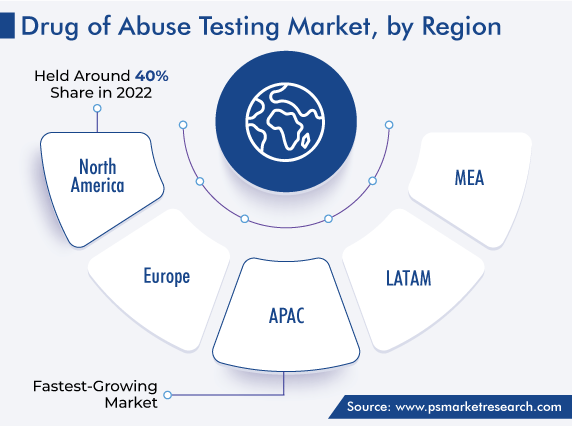 Consumables hold the major share, over 60%, because they can be made quickly available for the onsite testing of drugs. The consumables can be used once as they have an extremely short shelf life, which means they need to be procured repeatedly.

Moreover, immunoassay analyzers are widely used, as they are a rapid, inexpensive, and convenient method to screen large numbers of samples in a variety of matrices. The analyzers also provide accurate results and, thus, hold the second-largest share.

The urine category dominates the market, since urine samples secrete metabolites, which can be easily tested for the presence of illicit drugs; these molecules are not destroyed by any external factor. Other reasons behind the preference for collecting urine samples for the analysis of intoxicating substances are the non-invasiveness of collection, quickness of the results, and the fact that the majority of the drugs can be identified in urine.

As a result, laboratories that were set up for urinalysis have greatly increased their capacity, by using assay kits and immunoassay analyzers. Moreover, the technological advancements in DOA testing methods, growing demand for such procedures, and increasing number of deaths due to overdoses have led to the increasing use of urine analysis for drugs. 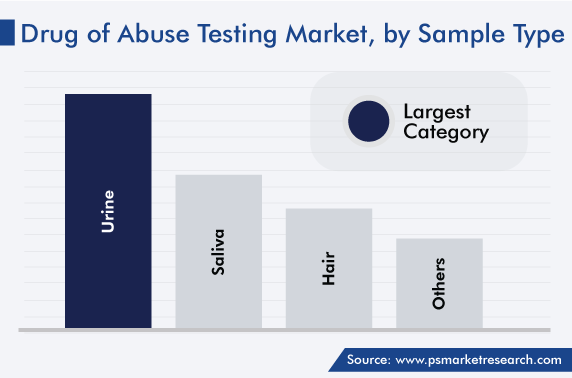 Hospitals are the major end users, with around 30%, because DOA tests are mostly conducted in hospitals. Moreover, a vast proportion of the samples collected at any other place are sent to hospitals for further analysis. The presence of advanced products in hospitals that are capable of carrying out a number of tests, as well as their easy access to drug screening instruments and prescription medicines, is credited to the domination of hospitals on this segment.

Key Players in Drug of Abuse Testing Market Are:

The study uncovers the biggest trends and opportunities in the drug of abuse testing market, along with offering segmentation analysis at the granular level for the period 2017 to 2030.

Based on Sample Type

Frequently Asked Questions About This Report
How big is the drug of abuse testing market?+

The market for drug of abuse testing solutions generated USD 6,321.2 million in 2022.

Which region will lead the global drug of abuse testing industry?+

North America will dominate the drug of abuse testing industry.

Which sample is utilized the most often in the drug of abuse testing market?+

Urine is the most-widely used sample in the market for drug of abuse testing solutions.

What are the biggest drug of abuse industry drivers?+

The biggest drivers for the drug of abuse testing industry are the growing trade of illegal drugs and high incidence of deaths and road crashes because of their consumption.

Who is the key end user in the drug of abuse testing market?+

Hospitals are the biggest end users in the market for drug of abuse testing solutions.