The global drive by wire market was valued at ~$23 billion in 2020. The major factors responsible for the growth of the market include the rise in the stringency of the vehicular emission norms of governments, increasing development of autonomous vehicles, and growth of the connected infrastructure.

However, the current COVID-19 pandemic has negatively impacted the market for drive by wire. As most of the countries implemented a complete lockdown for more than two months, the production of automobiles witnessed a massive reduction. This led to a drop in the rate of the integration of drive by wire controls in vehicles. 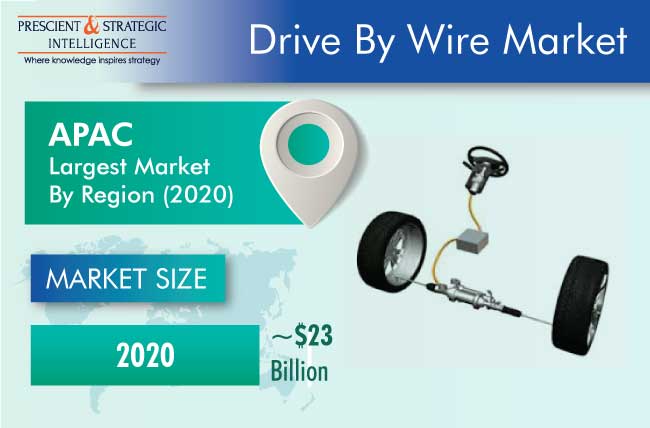 The steer-by-wire category is expected to have the highest CAGR over the forecast period, based on application. This can be attributed to the fact that this system has a reduced requirement for maintenance, as it is constituted of an integrated electronic control unit, embedded software, and control area network bus interface.

Asia-Pacific (APAC) holds the largest share in the market because of the increasing disposable income of its middle-class population and the cost advantages experienced by original equipment manufacturers (OEMs) owing to the availability of cheap labor and raw materials. Moreover, the growing popularity of premium and luxury vehicles and presence of stringent emission norms in the region are expected to boost the APAC market for drive by wire. 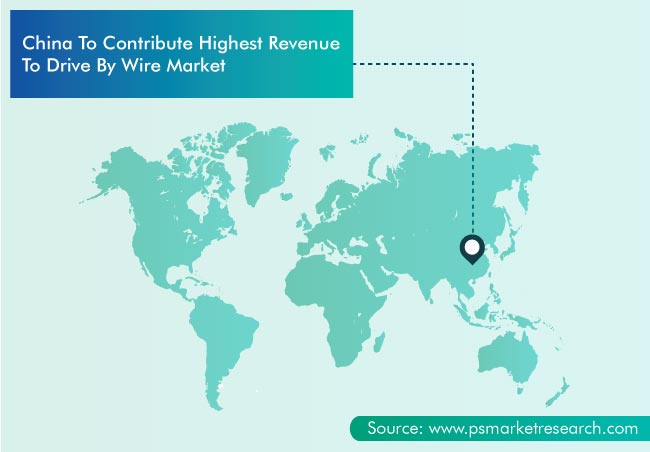 Increasing Rate of Vehicle Electrification Is Key Trend in Market

The automotive industry has clearly witnessed a technological revolution with the introduction of hybrid electric vehicles. The demand for these vehicles has been fueled by the tax benefits available on their purchase and rising environmental awareness. As the conventional systems that are used to power the engine add to the requirement for fuel, the use of an electric motor in the start–stop system can significantly lower the load on the engine, thus leading to fuel efficiency. Thus, the electrification of automobiles is a major trend in the market. 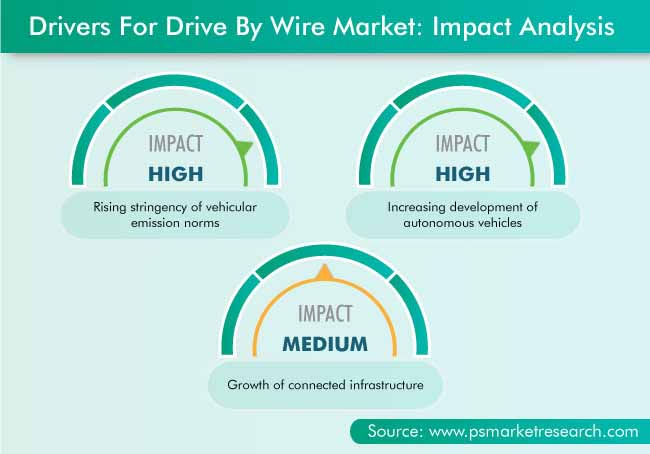 The global automotive industry has witnessed a transformation over the last few years with the emergence of autonomous vehicles. These vehicles offer several advantages, ranging from improved safety to a reduction in fuel consumption, traffic congestion, and emissions. They consist of various sensors to support these advantages; thus, they require a huge number of electric connections and terminals for the operations of such advanced features, which will ultimately propel the drive by wire market advance.

In the wake of the increasing concerns over air pollution and the effect it has on human and environmental health, governments around the world are implementing new emission norms and making the existing ones more stringent. Due to the presence of such regulations, manufacturers are being compelled to use lightweight materials in vehicles in an effort to increase their fuel efficiency. This calls for drive by wire controls, which is why the market will grow with the increasing stringency of emission norms.

In recent years, players in the global drive by wire market have been actively involved in product development to stay ahead in the competition.

Key Players in Drive by Wire Market Include:

The drive by wire market report offers comprehensive market segmentation analysis along with market estimation for the period 2015-2030.

Based on Sensor Type

Frequently Asked Questions About This Report
How much was the global drive by wire market worth in 2020?+

Which region dominated the drive by wire market in 2020?+

Asia-Pacific dominated the drive by wire industry in 2020.

Why did the drive by wire industry boom in Asia-Pacific in 2020?+

The drive by wire industry boomed in Asia-Pacific in 2020 because of the high disposable income of the region’s middle-class populace.

What is the prominent trend in the drive by wire industry?+

The surging rate of vehicle electrification is the major trend currently being witnessed in the market for drive by wire.

What is the major growth driver of the market for drive by wire?+

The implementation of strict vehicular emission norms is the major growth driver of the market for drive by wire.