The global advanced driver assistance systems market size was valued at $25.84 billion in 2021, and this number is expected to increase to $72.2 billion by 2030, advancing at a CAGR of 12.1% during the forecast period. This can be attributed to the increasing adoption of autonomous vehicles, the emerging automotive sector, the rising R&D activities particularly in developing nations, and the growing population worldwide. Furthermore, the surge in the adoption of safety features in passenger vehicles, the rise in technical innovations, and governments’ extensive support in terms of policy implementation and financial benefits are aiding the market growth. 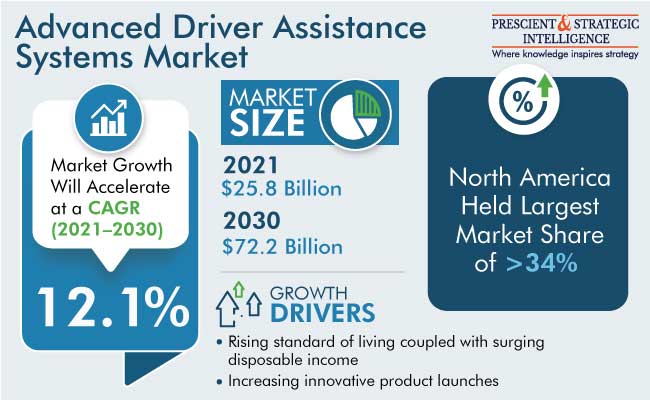 Tire pressure monitoring system (TPMS) held the largest revenue share, of more than 18%, in 2021. The growing consumer awareness regarding vehicle safety, the increasing implementation of electronic systems in vehicles, the mounting need for tire pressure management, the surging focus on improving the service life of tires, and the rising production of vehicles are the key reasons propelling the market growth in this category.

The adaptive cruise control system category held a significant revenue share in 2021, and it is further expected to maintain its position in the coming years. This is due to the growing preference for ADAS in emerging economies, the increasing number of on-road vehicles, the rising incidence of traffic jams, and shifting consumers’ choices for technology-equipped vehicles. Moreover, the need for technologically advanced braking and collision avoidance systems has given a boost to the development of the system.

The intelligent park assist (IPA) system category will register substantial growth during the predicted period. This can be attributed to its features, such as it enables users to park vehicles in any acceptable parking lot in seconds without difficulty, assists drivers in reverse parking and exiting a parallel parking place, and improves vehicle safety. This is also due to the rise in tight parking spaces, owing to the surging number of vehicles across the globe.

The lane departure warning system (LDWS) category will also witness a significant growth rate during the study period. This can be due to its features such as it is designed to alert drivers when vehicles are leaving a detected lane and the turn signal is not activated. This keeps passengers and drivers safe from crashes like striking a car in an adjoining lane. Moreover, with the stringent government regulations and the introduction of advanced products by key players, the demand for LDWSs is expected to increase significantly in the coming years. 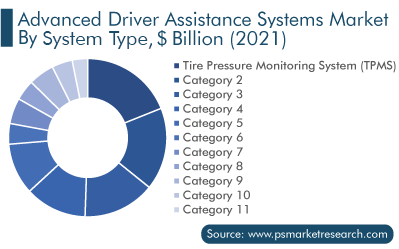 The radar sensor category accounted for the largest revenue share in 2021, and it is further expected to maintain its position during the forecast period, advancing at a CAGR of more than 12%. This can be ascribed to its several benefits, such as the capability of identifying an object's exact location, determining its velocity, measuring its distance, distinguishing between stationary and mobile targets, focusing on many targets at once, collecting a lot of data, and obtaining information at multiple scales.

In addition, such products are gaining traction in the industry, due to the growing adoption of long-range radar (LRR) sensors in vehicles, owing to the ability to detect signals from a greater distance (covering three motorway lanes, equaling up to 150 m in distance); and its superior data detecting capacity that pushes for its rapid adoption.

Automotive light detection and ranging (LiDAR) sensors contributed significant revenue to the market in 2021. This is due to the number of such sensors increases per car, owing to the trend of autonomous vehicles and the rising demand for electric vehicles as well as luxury cars. Furthermore, the integration of several ADAS sensors, such as radar, lidar, cameras, and image sensors, is projected to help companies achieve near-accurate vehicle automation.

Based on autonomy, the demand for L4 and L5 vehicles is expected to grow with a significant CAGR in the coming years. This can be attributed to the rise in the trend of automation in the automobile industry, the high preference of consumers for automatic cars as they need less effort to drive, and high R&D and investments in launching robot taxis.

The advancement in technologies has been increasing the number of connected cars. Such cars are safer as compared to standard passenger cars, as several systems promoting vehicle safety are integrated within the connected vehicles. The market has expanded as a result of the growing consumer awareness of the safety and comfort of passenger automobiles with ADAS integration.

The market expansion is also being fueled by the surging government regulations governing the installation of ADAS in automobiles for passenger safety across the world. Additionally, in developing as well as developed nations, the number of road accidents or fatality rates increases, as the number of on-road vehicles increases. To reduce the number, the demand for ADAS is increasing significantly.

Moreover, the rising adoption of semi-autonomous vehicles is a major driver propelling the growth of the ADAS industry. Different countries across the world have made it mandatory for vehicle manufacturers to install different advanced driver-assistance features in vehicles. The compelling promise of enhanced passenger safety and smoother road traffic autonomous technology is a primary reason for the adoption of these vehicles. As a result, most of the major vehicle manufacturers are now providing ADAS, such as automatic emergency braking, adaptive cruise control, anti-lock braking system, and automatic parking, in their new vehicles, to provide a safer driving experience to customers. This, in turn, is driving the demand for ADAS solutions across the world.

North America accounted for the largest revenue share, of more than 34%, in 2021 and is further expected to maintain its position during the forecast period. This is attributed to the high vehicle per capita, a huge number of premium car ownerships, the mounting preference of consumers for ADAS-equipped vehicles, technological advancements, and the falling cost of sensors and systems that encourages automotive manufacturers to provide more models of vehicles with advanced ADAS offerings.

Whereas, the APAC market will witness the fastest growth during the forecast period. This high growth can be ascribed to the easy availability of sensors used in vehicles due to the extensive electronics industry; the rise in the number of vehicles used for the transportation of goods as well as private-owned cars; the surge in the demand for high-end cars due to the increasing number of HNIs; prominent automobile manufacturers shifting their production facilities to regional countries to expand capabilities; and several government measures, such as the introduction of adaptive cruise control and emergency braking systems, have been implemented to encourage OEMs to enter the advanced driver assistance systems market.

In addition, Europe held a significant revenue share in 2021 and is expected to maintain its position in the coming years. This is ascribed to the prevalent regulations suited for the enhancement of the autonomous car market, the increasing fatality rate, the extensive number of premium vehicle manufacturers, and the high adoption rate of technological features in vehicles. Additionally, the European Union proposed Vision Zero, a plan to reduce traffic deaths to zero by 2050, which propels ADAS usage in the region. 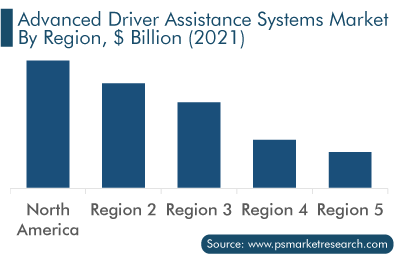 Based on Sensor Type

Based on Autonomy Level

Frequently Asked Questions About This Report
What was the size of the advanced driver assistance systems market in 2021?+

What will be the growth rate of the advanced driver assistance systems market during the forecast period?+

During 2021–2030, the growth rate of the advanced driver assistance systems market will be around 12.1%.

Which is the largest vehicle type in the advanced driver assistance systems market?+

What are the major drivers for the advanced driver assistance systems market?+

The major drivers of the advanced driver assistance systems market include the growing trend of autonomous vehicles, the rising standard of living coupled with surging disposable income, the increasing innovative product launches by prominent players, and the surging consumers’ preferences for safety and comfort features in vehicles.