Further, the growing number of internet users, increasing use of social media, rising smartphone penetration, and strengthening need for enterprises to migrate from server room environments to data centers are the major drivers for the market. 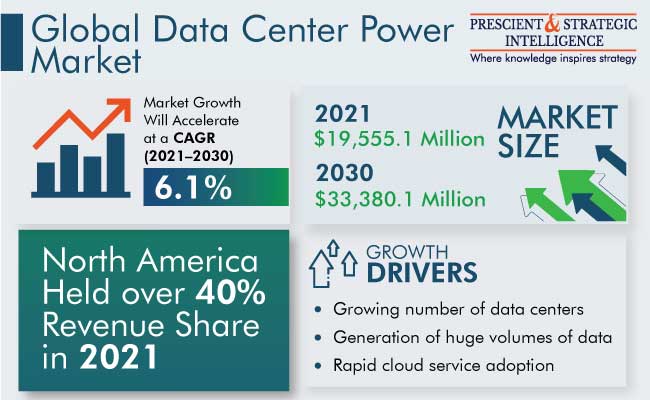 The tier III & tier IV category led the market, with over 90% revenue share, in 2021, and it is likely to continue this way in the coming years. This is largely due to the fact that these categories offer N+1 and 2N redundancy, which means the architecture can sustain the entire IT load, while also including extra components for power backup, thus ensuring that performance is not harmed if a single component fails. During a disturbance, redundant systems take over, to ensure operations are not affected.

Some other benefits of tier III & tier IV variants include:

UPS systems ensure the continuous operations of large data centers and protect critical equipment across the facility. They include multiple configurations and dual-bus capabilities to ensure critical systems continue to operate in the event of power outages, blackouts, sags, and surges. UPS systems for the modular creation of a fully redundant power and control system can be sized to meet the critical equipment's power requirement. When power needs change, the capacity may be simply added, without expanding the system footprint. Owing to such factors, the installation of UPS systems in the data center power infrastructure is significantly high, which is why this category accounted for the largest market share in 2021.

In the coming years, the IT and telecom industry is expected to dominate the vertical segment. Huge amounts of data are being generated as a result of the extensive use of advanced technologies, such as IoT, cloud computing, and AI. This data originates from mobile internet usage, personnel records, network equipment, server logs, billing activity, and social networks. As a result, the industry accounted for more than half of the sales in this market in 2021.

One of the primary factors driving the growth of the industry is the fast-expanding data generation. In 2020, about 64.2 zettabytes of data were generated, a 314% increase over 2015. Furthermore, 2.5 quintillion bytes of data are generated globally every day. With the introduction of IoT and the widespread adoption of social media platforms, nearly 90% of the world's data was created in the last four to five years.

The increase in data generation is being driven mostly by the massive usage of machine-to-machine, embedded, and IoT devices. Other sources include videos and images, content for entertainment and functional applications, such as security and advertising, as well as productivity-driven data, such as the log files on computer systems and servers. This data is used by businesses to improve their products and services, maintain consumer relations, and increase profitability.

5G networks are projected to play a critical role in assisting governments and policymakers in transforming cities into smart cities, thereby allowing inhabitants to realize and participate in the socioeconomic benefits provided by an advanced, data-intensive, digital economy. As a result, authorities will be required to build and upgrade passive assets, such as fiber networks and data centers.

In 2021, North America held the largest revenue share in the data center power market. This is ascribed to the region's substantial investment in R&D, which is resulting in the establishment of next-generation facilities, which are more technologically advanced and efficient in terms of power management. It is also home to a number of data center developers, which is expected to have a positive impact on the market. 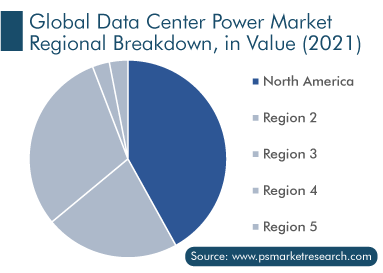 Moreover, APAC is projected to be the fastest-growing region in the coming years due to the deployment of edge computing locations across many countries, including India, Japan, and China.

Furthermore, the government of these countries is promoting data centers, as well as investing heavily in infrastructure development. 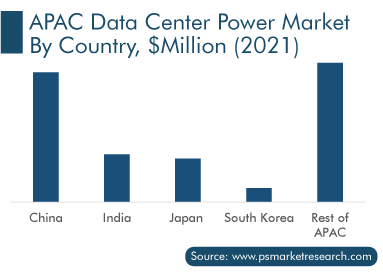 The research offers the market size of the global data center power market for the period 2017–2030.

Based on Equipment Type

Based on Data Center Size

Frequently Asked Questions About This Report
How big will the data center power market be in 2030?+

The healthcare sector drives the data center power industry because of the rising usage of digital healthcare solutions, such as connected medical devices, telehealth, mHealth, and EHRs.

Why is uninterrupted power important in a data center?+

Uninterrupted power is essential in a data center as several critical pieces of the IT infrastructure, such as racks, networking devices, and servers, do not easily tolerate power outages and spikes.

Who are the competitive forces in the data center power market?+

Major end users in the data center power industry are BFSI, IT and telecom, healthcare, and government and defense firms.