The chlorine market value was $36,845.0 million in 2019, and the market is predicted to advance at a CAGR of 5.2% between 2020 and 2030. The increasing usage of the chemical in water treatment applications and burgeoning requirement for polyvinyl chloride (PVC) are the major factors driving the expansion of the market.

The COVID-19 pandemic is positively impacting the growth of the chlorine industry. Moreover, the industry revenue is predicted to surge sharply in the post-COVID-19 world, primarily due to the increasing concerns being raised over the existence of pathogens in water supply systems. While the announcement of lockdowns and the subsequent shutting down of manufacturing plants and facilities, for controlling the spread of the virus, negatively affected the market, it was only a minor setback. The market is predicted to register rapid expansion in the coming years because of the growing public awareness about the importance of treated water and sanitization. 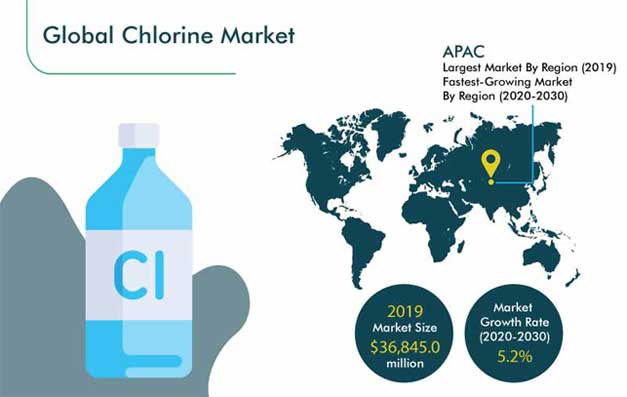 The EDC/PVC category held the largest share under the application segment of the chlorine market in 2019. This was because of the extensive usage of the chemical in the chlorination process required for producing EDC/PVC. With the soaring requirement for EDC/PVC in several applications in the automotive, building & construction, electrical & electronics, and various other sectors, its production is booming all over the world. Thus, with the mushrooming requirement for the EDC/PVC in these industries, the global consumption of chlorine is skyrocketing, thereby causing the expansion of the category in the market.

The water treatment end use category is predicted to demonstrate the fastest growth in the market for chlorine in the coming years, primarily due to the surging concerns over water safety across the world. Chlorine is heavily used in water utilities as a disinfectant, for providing safe drinking water and clean water for sanitation. Because of this reason, the demand for the compound is rising sharply, which is, in turn, fueling the advance of the category.

Furthermore, in the U.S., the Environmental Protection Agency (EPA) has mandated that treated tap water must contain a certain detectable level of chlorine, for ensuring that it remains free of germs till it reaches the taps of consumers. This is massively boosting the requirement for the chemical for water treatment purposes, thereby propelling the expansion of the category in the chlorine market.

APAC was the largest market for chlorine in 2019, and this trend is predicted to continue in the coming years. This is credited to the soaring requirement for the chemical in emerging economies, such as India, Thailand, and China, for producing EDC/PVC. The production of EDC/PVC is rising here on account of its soaring consumption in the electrical & electronics, automotive, and building & construction sectors. PVC is heavily used for insulation, roofing, shingles, flooring, and door sidings. Thus, in order to cater to the soaring requirement for EDC/PVC in these applications, its production will shoot up, which will, in turn, propel the sale of chlorine in the future.

Moreover, the element is being extensively used in water treatment applications and the pharmaceutical sector in these countries. The growing public awareness about the water-borne diseases caused due to the consumption of untreated water, such as trachoma, hepatitis, and diarrhea, and the increasing understanding of this issue in the emerging economies of APAC, such, as India, Indonesia, and China, are the major factors driving the expansion of the chlorine market in the APAC region.

Additionally, the compound has the ability to impart a white appearance to paper, by removing lignin, which is a wood fiber element that makes paper appear yellow under sunlight. With the advance of the pulp & paper industry in the region, the demand for the chemical is exploding. For instance, in May 2019, a memorandum of understanding (MoU) was signed between Asia Pulp & Paper (APP), a paper company based in Indonesia, and the Government of Andhra Pradesh (India) for the eventual construction of a new pulp & paper mill with a capacity of 5 million tons per year in the Indian state. Therefore, with the surge in investments and development of pulp & paper production facilities, the demand for chlorine is predicted to soar in this region in the coming years. 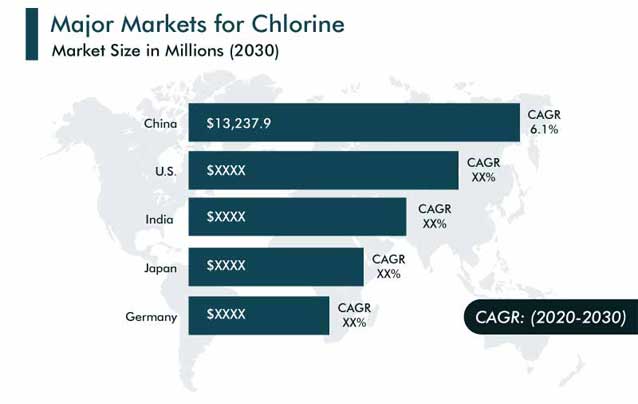 Over the last few years, the consumption of chlorine has increased massively, primarily due to the sharp rise in the demand for treated water for sanitation and drinking, a trend that will continue in the chlorine market in the coming years. Emerging economies, such as India, Thailand, and Brazil, are increasingly focusing on raising public awareness about the harmful effects of consuming untreated water and its role in fueling the incidence of diseases such as cholera, typhoid, Hepatitis E, and Hepatitis A. As chlorine has the ability to kill bacteria and other pathogens, its usage in water treatment is surging.

The compound is also increasingly being used for treating water in order to make it suitable for swimming pools and irrigation. Additionally, the governments of several countries are taking strict measures to regulate the supply of treated, clean, and safe water. These factors are predicted to propel the usage of the chemical, thereby driving the advance of the market.

Chlorine is extensively used during the chlorination process required for producing PVC. The usage of the element in PVC provides various benefits, such as aa higher melt viscosity and improved thermal stability during the production process. Because of this reason, the gas is being heavily used in PVC, and this is one of the major chlorine market drivers. With the burgeoning requirement for PVC in siding and piping applications in the building & construction sector, windshield system parts in the automobile sector, and non-breakable containers in the medical sector, its consumption is ballooning, which is, in turn, fueling the demand for chlorine across the world.

Manufacturers in the industry are increasing their production capacities as well as geographical presence, in order to gain a competitive edge. For instance: 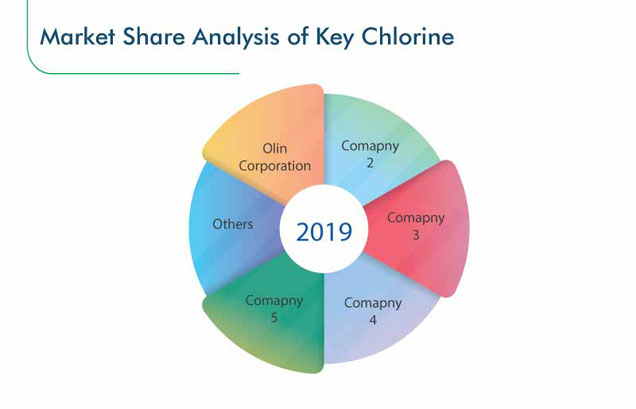 Some of the Key Players in the Chlorine Market Include:

The chlorine market report offers comprehensive market segmentation analysis along with market estimation for the period 2014–2030.

Frequently Asked Questions About This Report
How much will the chlorine market value in 2030?+

Which end use will the major product demand in the chlorine industry come from?+

The major chemical demand in the chlorine industry will be generated for the water treatment end use.

Which region will witness the fastest chlorine market growth?+

The fastest growth in the chlorine market will be witnessed in APAC.

Why is the chlorine industry consolidated?+

The consolidation in the chlorine industry is due to the presence of just a few major players.

What are the key chlorine market players doing to augment their revenue?+

In order to increase their revenue, key players in the chlorine market are raising their production capacity.