The global cardiac biomarkers market size was $8,459.6 million in 2021, and it is expected to generate $20,718.8 million by 2030, advancing with a robust CAGR of 10.5% during 2021–2030. This can be attributed to the increasing incidence of acute coronary syndrome (ACS), technological advancements in cardiac biomarkers, growing demand for point-of-care testing kits, and need for high specificity in the identification of cardiac disorders, particularly myocardial infarctions.

Additionally, the rising investments in biomarker research, increasing aging population, and surging incidence of CVDs due to the changing lifestyle are set to drive the market in the upcoming years. 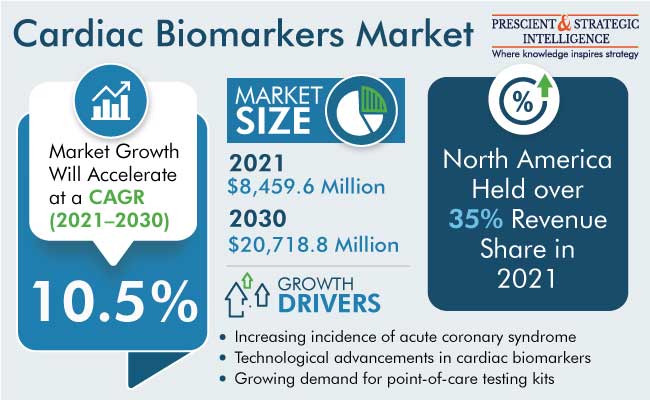 Troponin accounted for the major revenue share of, over 35%, in 2021 in the market, and this category is expected to grow with a robust CAGR during the forecast period. This is due to the extraordinary specificity and capacity of their protein complex to help recognize cardiac problems, such as ACS, accurately. Additionally, the high prevalence of myocardial infarction will drive the market, as troponin is now the most-common tool to detect this condition. Furthermore, the myocardial muscle creatine kinase category will grow with a significant CAGR, followed by troponin, during the forecast period.

Additionally, cardiac test kits include a variety of combined tests that identify the existence of biomarkers, thus making the identification of cardiac disorders easier. The growing demand for these kits is a result of the quick diagnosis that can be achieved with them, which ultimately allows for faster treatments. Essentially, they aid in the diagnosis of chest discomfort and the identification of risk factors before adverse cardiac events take place.

The market for cardiac biomarkers is growing due to the rising prevalence of CVDs. According to the WHO, approximately 18 million deaths globally are caused by CVDs each year, which is 31% of all fatalities.

Hence, market players are aiming to offer test kits that help in the detection of biomarkers that enable a better understanding of the pathogenesis of CVDs. Major biomarkers discovered in recent years include B-type natriuretic peptide, C-reactive protein (CRP), N-terminal prohormone BNP, lipoprotein-associated phospholipase A2, and cystatin C. The increasing use of biomarkers in risk assessment and ACS diagnosis is driving the cardiac biomarkers market advance.

Laboratory testing accounts for the larger revenue share, of around 60%, and this category is expected to maintain its position during 2021–2030. This is due to the increase in the healthcare spending and the number of reforms for healthcare infrastructure improvement, rise in the disposable income, and the government and private sectors’ initiatives aimed at preventing heart diseases.

The point-of-care testing category will grow with the higher CAGR during the forecast period, because doctors are increasingly adopting this approach to monitor patients with chest pain in critical care centers.

Myocardial infarction is the highest revenue contributor, with around $3.0 billion, in 2021, and this category is further expected to dominate the market during the forecast period. This is due to its rising incidence globally because of the changing lifestyles, unhealthy food, excessive smoking, and coronary artery disease. Furthermore, the surge in the demand for biomarker tests for the early detection of heart failure is the key factor set to boost the cardiac biomarkers market growth in the coming years.

The North American cardiac biomarkers market accounted for the largest revenue share, of over 35%, in 2021. The dominance of the region can be attributed to the increasing usage of biomarkers for precision medicine, different growth strategies implemented by market players, and increasing adoption of biomarkers for the detection of cardiac diseases.

APAC will be the fastest-growing market for such biomarkers, with a CAGR of around 11%, during the forecast period. This can be attributed to the growing healthcare infrastructure, various government schemes for the healthcare sector, high investment by market giants, high prevalence of cardiac diseases, and rising aging population.

In addition, Europe holds a significant revenue share in the global market due to the presence of prominent research institutions and market players. Furthermore, the industry growth can be ascribed to the rising number of collaborations between regional universities and biomarker providers, governments and market players’ R&D initiatives related to biomarkers, and the strong efforts being taken to create awareness about the benefits of biomarkers. 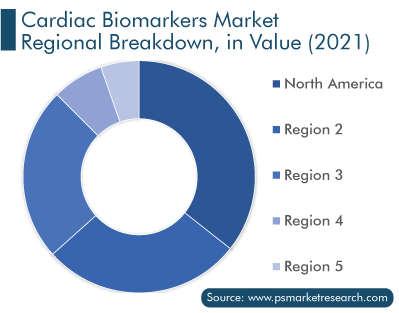 Based on Testing Location

Frequently Asked Questions About This Report
What was the value of the cardiac biomarkers market in 2021?+

Which is the dominant application in the cardiac biomarkers industry?+

Heart attack is the most-significant application in the cardiac biomarkers industry.

What are the key drivers for the cardiac biomarkers market?+

The market for cardiac biomarkers is driven by the rising geriatric population, increasing incidence of CVDs, and surging awareness on the utility of biomarkers.

Players in the cardiac biomarkers industry should target the healthcare facilities North America, Europe, and APAC.

What are the growth prospects for the cardiac biomarkers market?+

The market for cardiac biomarkers will witness a 10.5% CAGR till 2030.