The global BPH treatment market size was $11,892.8 million in 2021, and it is projected to reach $18,837.7 million in 2030, with a growth rate of 5.2% during 2021–2030. The soaring prevalence of BPH, surging preference for minimally invasive surgeries, and increasing investments, funds, and grants for conducting research on new treatments are the prominent contributors to the progress.

Moreover, the burgeoning aging population, particularly the geriatric male segment, is a major driver of BPH incidence, which, in turn, fuels the demand for medications across the globe. In addition to this, the adoption of minimally invasive surgeries has been flourishing significantly due to their less post-operative pain, reduced hospital stays, less blood loss, and faster recovery. This expands the production of minimally surgically surgical instruments, thus leading to their easy availability for healthcare settings.

Technology has played a crucial part in most of the recent advancements in BPH management, no more so than in the rise of procedures that do not necessitate general anesthesia or prolonged hospital stays. There is a novel mechanical implant available for the prostate that moves its invading lobes out of the way, to enhance urine flow. Furthermore, a device known as UroLift has shown to cause minimal disruption during ejaculation and, when compared to the traditional surgery, known as TURP, in a recent trial, had similar outcomes, including patient satisfaction with minimal complications. 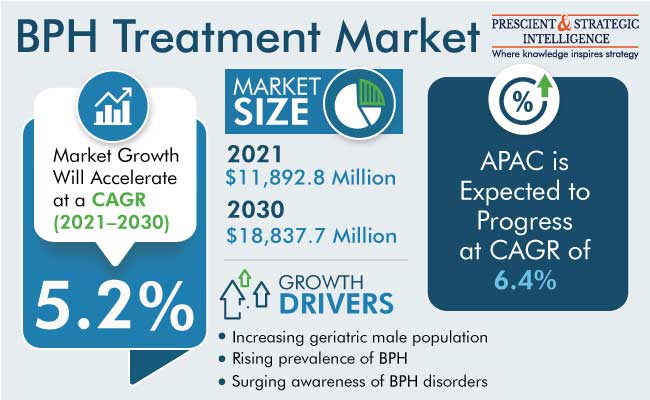 In addition to this, prostatic artery embolization is a new technique that is performed by an interventional radiologist. Performed under a local anesthetic, it involves a groin artery puncture with the super-selective vascular embolization of the arteries to the prostate. This is postulated to cause a shrinkage of the prostate and an improvement in urinary function.

Surgery is a better alternative to the management of BPH via medication, but patients have a higher preference for medication due to the post-operative damage to the body caused by surgical cuts and burns. The development of minimally invasive procedures has brought about a change in patients’ perception and given surgical device manufacturers a competitive edge.

For instance, in August 2020, the UroLift enhanced tissue control system was developed by Teleflex Inc. to treat people with BPH. Small implants, which retain the prostate lobes in a retracted position, can be inserted into the system to open the urethra. The device is designed to treat patients with a difficult prostatic architecture, such as those who have big lateral lobes or an obstructive median lobe.

Additionally, in April 2022, Teleflex Inc. launched the UroLift System in Japan. Teleflex had previously announced the receipt of the reimbursement approval from the Central Social Insurance Medical Council of Japan (Chuikyo). Additionally, the Food and Drug Administration (FDA) has approved Entadfi, a comination medication containing finasteride and tadalafil, to treat the problem in men who have an enlarged prostate, for up to 26 weeks.

The larger BPH treatment market share, around 85%, was held by drugs in 2021. This is attributed to the burgeoning demand for alpha-blockers as these medications relax the muscle of the prostate and bladder neck, which enables urine to flow more easily. Among the different types of drugs, alpha-blockers have been widely utilized to treat the disease in recent years. Their increasing use and the abundance of medications under development present potential opportunities for the industry.

Additionally, due to the high demand for alpha-blockers, businesses such as Sun Pharmaceutical Industries Ltd. and Astellas Pharma Inc. continue to invest in this industry. The development of such medication, which may be used in both monotherapy and combination therapy, is driving their demand. They are a preferred medication for the treatment of benign prostatic hyperplasia since they are rather effective and inexpensive. 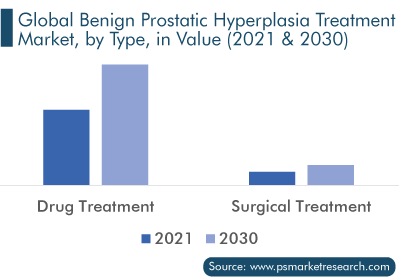 Among the end users, home healthcare settings accounted for the larger share in the market in 2021, and they are expected to record the higher CAGR, over 5%, during the forecast period, due to the increasing number of patients prescribed drugs over surgical treatment. Moreover, a significant proportion of the population prefers drug-based treatment at their homes over treatment in hospitals. Further, patients are highly recommended to take medications for a couple of months after surgeries, which further bolsters the market expansion in this category.

In most men, BPH worsens with age. It can lead to bladder damage and infection, cause blood in the urine, and result in kidney damage. For its prevention, various programs and campaigns are run globally. For instance, in North America, every year, September is observed as National Prostate Health Month by health experts, health advocates, and individuals concerned with prostate health. The main purpose of designating a whole month for this body part is to create awareness of the risk factors and symptoms of the related diseases.

In the same way, in Greece, the Hellenic Urological Association (HUA) organizes a week-long public awareness campaign on prostate gland diseases in September, under the motto "don't ignore your prostate”, within the framework of the European Week of Urological Diseases. Moreover, within the framework of the Prostate Disease Week, the HUA implements a series of actions, with the support of Astellas, which include media interviews, distribution of prostate gland leaflets, and events in various cities of Greece. Interested parties can visit public hospitals during the hours of operation of their outpatient clinics and be examined.

In 2021, North America accounted for the largest share, of 41.0%, in the BPH treatment market. The growing incidence of the problem is fueling the adoption of advanced treatments, such as laser therapy, prostatic stenting, and UroLift therapy, thereby driving the industry development in the region. Further, the favorable reimbursement policies and a rising number of trained surgeons will support the advance of the players in the region in the next few years.

The region has the presence of several device and drug manufacturers, who are strongly focused on conducting R&D activities and product innovations to enhance the quality of care. Additionally, there is high penetration of laser therapy owing to the availability of advanced healthcare infrastructure. Several clinics and urology centers are equipped with modern laser equipment to treat BPH, which, in turn, boosts the regional progress.

The APAC region is expected to witness the fastest growth during the forecast period, at a CAGR of 6.4%. The surging living standards, flourishing per capita income and spending capability, increasing urological disease burden, and rising investment in the healthcare sector inflate the progress.

Moreover, the burgeoning aging male population in the region, coupled with an escalation in the incidence of diabetes and obesity, is expected to drive the prevalence of BPH and other lower urinary tract conditions. China, Japan, and India together have a large elderly male population, which requires regular medical assistance, as it is highly susceptible to chronic diseases owing to its low immunity. Thus, patients with an irregular growth of the prostate are required to be treated, to prevent urethra blockage and reduce the associated cancer risk. 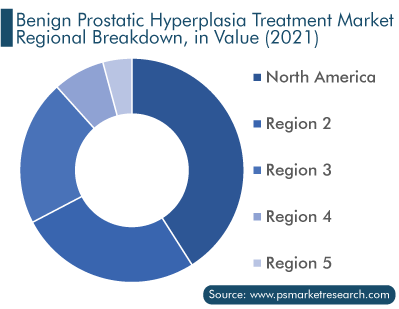 For instance, the prevalent cases and incident cases of BPH in China were approximately 20.34 million and 2.84 million, respectively, and the standardized incidence rate and standardized prevalence rate were 280.64/100,000 and 2,220.85/100,000, respectively, in 2019. Similarly, in India, it is an ordinary elderly problem, with an incidence of 93.3%, which fosters the demand for drugs as well as surgical treatments.

The study offers a comprehensive market segmentation analysis along with market estimation for the period 2015-2030.

Frequently Asked Questions About This Report
What will be the value of the global BPH treatment market in 2030?+

Which end use category will grow the faster in the BPH treatment industry?+

Home healthcare settings will witness the faster advance in the BHT treatment industry.

Which will be the faster-growing type in the BPH treatment market during 2021–2030?+

Drug demand will grow faster in the market for BPH treatment.

What is the major trend in the BPH treatment industry?+

Minimally invasive surgeries are trending in the BPH treatment industry.

What is the regional scenario of the BPH treatment market?+

North America dominates the market for BPH treatment, and APAC will have the highest CAGR.