Valued at $28,214.6 million in 2019, the global automotive software market size is projected to witness a CAGR of 12.4% during the forecast period (2020–2030). The growing demand for connected cars, introduction of innovative technologies for advanced user interfaces, and increasing research and development (R&D) on autonomous technology are the major factors driving the growth of the industry.

The coronavirus disease COVID-19 pandemic has had a significant impact on the automotive industry across the world. Due to the decline in the industry, the automotive software market is also witnessing a slowdown, attributed to the temporary lockdown of operations in COVID-19-affected countries. The global automotive software market is expected to witness a significant decline, as the repercussions of the ongoing COVID-19 outbreak are affecting the normalcy of operations. However, it will not experience as much decline as that of automotive industry, primarily due to still on-going demand for electric vehicles and rising demand for ADAS features in new vehicles. 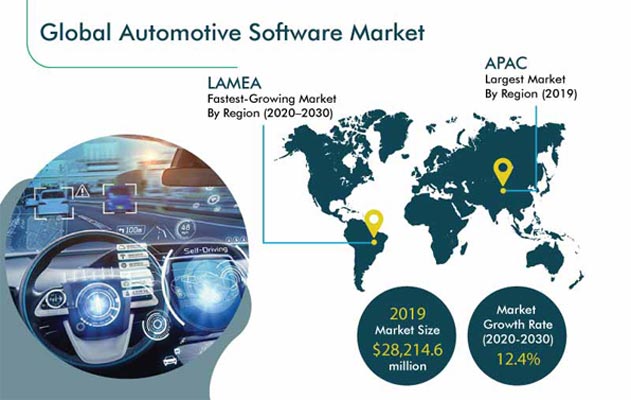 The advanced driver-assistance systems (ADAS) and autonomous driving (AD) category dominated the automotive software market during the historical period (2014–2019), on the basis of software. Technologies such as ADAS, automatic braking, and lane assist significantly enhance the driving experience, making it safer than ever. Such technologies help in reducing traffic rule violations, in turn, causing a decline in the road accidents and enhancing the driver experience. Furthermore, several companies are taking up R&D activities, in order to deploy autonomous cars, which are largely dependent on software. The increasing efforts to deploy AD vehicles and ADAS features in new vehicles are positively impacting the industry growth.

The development category, on the basis of function, is projected to attain the fastest growth in the automotive software market during the forecast period. Comprehensive software offers improved functionality in a variety of products and provides better value to customers; same is being witnessed in the automotive industry. Vehicle manufacturers are working on the deployment of more software features in automobiles, and the vehicles are also becoming more dependent upon software, to manage wide-ranging components, from elaborate infotainment systems to advanced drivetrains.

The passenger car bifurcation held the larger share in 2019 and dominated the automotive software market during the historical period. The comparatively larger customer base for passenger cars, growing demand for connected vehicles, mandates for vehicle safety, and growing disposable income of customers, allowing them to buy advanced cars, are the factors driving the category growth in the market. Furthermore, the autonomous technology is also being largely adopted for passenger cars, and several vehicle manufacturers are working on the deployment of different levels of autonomy in passenger cars, which, in turn, is further resulting in the rising demand for software for passenger cars.

Globally, Asia-Pacific (APAC) held the largest share in the automotive software market in 2019. The region comprises emerging economies, such as India and China, as well as developed nations, such as Japan. Additionally, the region is the largest market for vehicles, and with the growing economy and customers’ purchasing power, the demand for advanced features in vehicles is also increasing.

Owing to this, vehicle manufacturers are offering advanced applications, such as keyless entry, human–machine interface (HMI), and auto-park assist, which generates a high requirement for innovative software. This, in turn, is projected to drive the evolution of the automotive software market in APAC. Furthermore, the region is the largest adopter of electric vehicles, with China being the largest market. In 2019, China registered nearly 1.1 million plug-in electric car sales. With the increasing production and sales of electric vehicles in the region, the industry for automotive software is also growing. 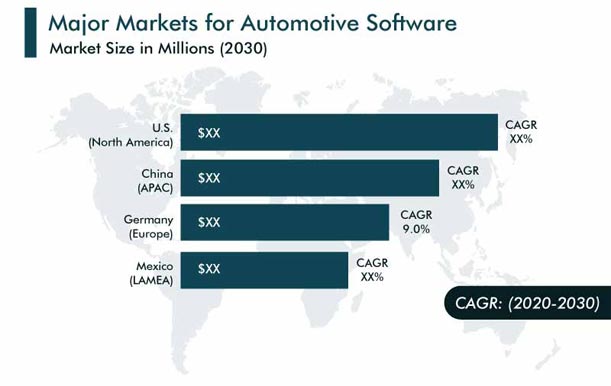 As vehicles are becoming more dependent on software, as they are on mechanical systems, the notion of updating the vehicle’s systems, using over-the-air (OTA) technology, is attaining momentum. Owing to this, several vehicle manufacturers are offering this technology in their automobiles, in order to update the vehicle’s software from time to time. Today, Tesla Inc. is one of the prominent companies that offer this technology. It uses the software OTA to fix or modify systems, which may include charger plug recall or changing the suspension settings of its vehicles, in order to give them more clearance at higher speeds. 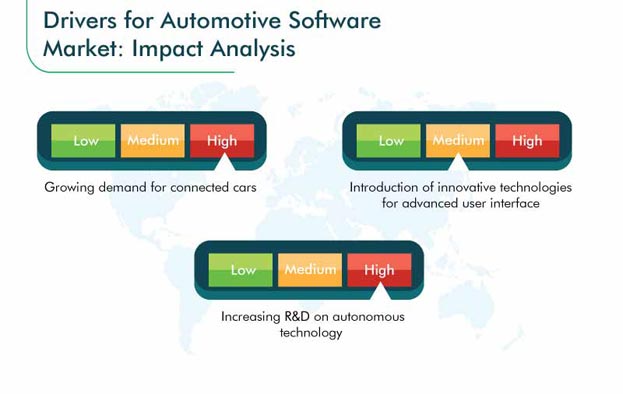 With urbanization, the demand for connected cars is increasing significantly. In 2019, the connected car market generated nearly $72.5 billion across the globe. The increase in the demand for these vehicles is majorly due to the increasing concerns for safety and security, rise in the demand for an enhanced driving experience, and introduction of internet of things (IoT) in the automotive industry. Vehicle manufacturers are incorporating IoT-based technologies, which is helping them achieve pathbreaking results pertaining to connectivity solutions used in connected cars. IoT offers an array of infotainment services and advanced connectivity solutions for drivers. Such factors are boosting the popularity of connected cars, thereby driving the automotive software market.

New vehicles are being equipped with innovative technologies, for an advanced user interface. While the vehicles become more technologically capable, it is essential to design the technologies to be more personal and human. For instance, Tesla Inc.’s Model S has few physical controls on or near the steering wheel. But, the majority of the secondary functions, which include media player, cell phone, climate control, and rear-view mirror, do not possess any dedicated physical control.

The access to them is through a 17-inch touchscreen display, which is placed on the vehicle’s dashboard. Such interfaces require software for technology integration, which is, in return, boosting the automotive software market growth, globally.

Autonomous cars are largely dependent on software, and the increasing effort to deploy autonomous driving features is positively impacting the automotive software market growth. Several vehicle manufacturers are integrating Level 1 and Level 2 autonomous technology in their vehicles; some models with Level 3 autonomy were also launched in 2019. Furthermore, many companies are engaged in R&D and testing activities for Level 4 and Level 5 autonomous vehicles, in different cities around the world. In 2017, Germany became the first country on earth to legalize the use of level 4 and 5 autonomous driving systems. In addition, some cities have also approved the operation of pilot fleets on private properties that offer suitable normal road traffic conditions.

Market Players are Partnering with Other Firms to Gain Competitive Edge

The global automotive software market is fragmented in nature, with the existence of market players such as NXP Semiconductors N.V., Robert Bosch GmbH, Airbiquity Inc., Renesas Electronics Corp., BlackBerry Ltd., and Microsoft Corp. In recent years, players in the industry have taken several strategic measures, such as partnerships, in order to stay ahead of their competitors. For instance:

Some of the Key Players Covered in Automotive Software Market Report include:

The research offers market size of the global automotive software market for the period 2014–2030.