Asia-Pacific (APAC) is expected to witness the fastest growth in the industry, during the forecast period. This can be mainly attributed to the growing demand for vehicles from countries such as India and China and increasing number of automobile manufacturing facilities in the region. 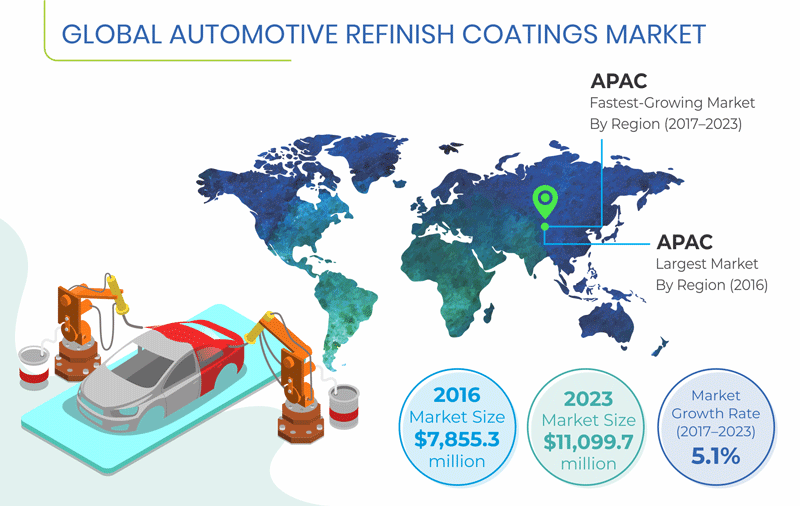 In 2016, the sale of used cars in India was 3.3 million, a robust increase when compared to the 1.6 million units in 2011. Similarly, in the U.S., the sale of used cars and trucks were at an all-time high, of 17.6 million units, in 2016. Due to their low prices, when compared to new vehicles, the middle-class has shown more interest in them, globally. In order to maintain the quality of used vehicles, various repair and maintenance services are done, either by the seller or the owner. Thus, the demand for used car services is expected to drive the automotive refinish coatings market. 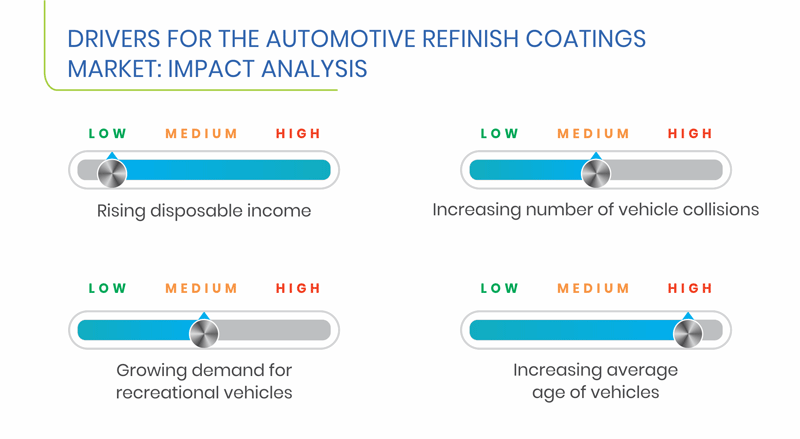 The clearcoat category held the largest revenue share in 2016, based on product type. This can be attributed to the fact that clearcoats are used to protect the basecoats and give a shiny look. Additionally, as the final coating, it provides durability, protection against environmental damage, and scratch resistance to the overall coating.

The water-borne category is expected to exhibit the fastest revenue growth in the automotive refinish coatings market, over the forecast period, by technology. In water-borne coatings, water is used as a carrier, instead of the traditional solvents, due to which such products are less flammable. The focus of the regulatory authorities on reducing volatile organic compounds (VOCs) and hazardous air pollutants (HAP) has led to the widespread utilization of water-borne coating technologies.

Polyurethane was the highest revenue-generating category, among all resin types, in 2016. The resin is finding widespread usage in the automotive refinish sector, with numerous companies, such as Axalta Coating Systems, PPG Industries Inc., and Nippon paints, focusing on the polyurethane resin, mainly owing to its lower cost.

The two-wheeler auto type category is projected to witness the fastest growth in the automotive refinish coatings market, in the forecast period, in terms of value. This would be on account of the growing population, coupled with the increasing demand for two-wheelers.

In terms of value, in 2016, vehicles aged less than five years were the largest category. This can be attributed to an increase in the sales of new vehicles, which is leading to congestion on the roads. This has led to an increase in collisions, owing to which customers tend to refinish vehicles to retain their aesthetic look.

APAC was the largest automotive refinish coatings market in 2016, and it is expected to maintain the trend during the forecast period. This can be mainly attributed to the rising demand for two wheelers, passenger cars, and commercial vehicles in emerging markets, such as China and India. Moreover, the commercial fleet is growing due to high logistics demand, and the rise in the disposable income is driving the rental cab service market.

Additionally, APAC is expected to witness the fastest growth during the forecast period, mainly on account of an increase in the sale of used cars and new vehicles and high number of collisions in countries such as China and India. 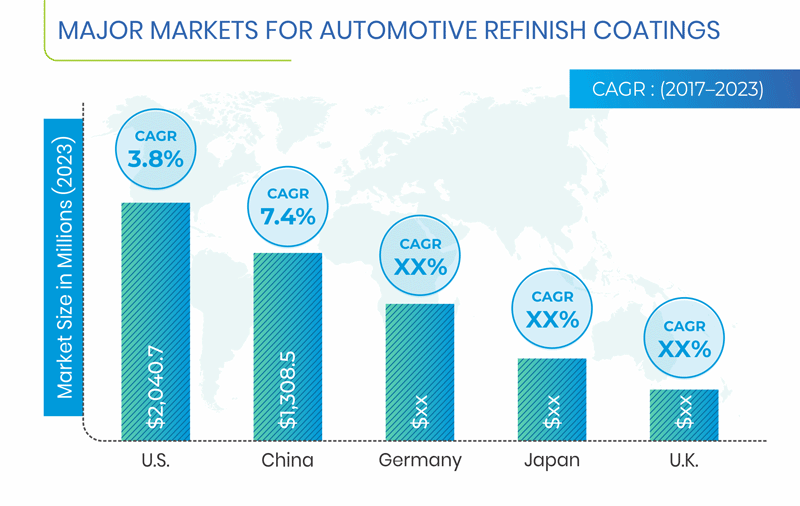 The automotive refinish coatings market is highly fragmented, with the presence of a large number of small and medium-sized players, such as PPG Industries Inc., Axalta Coating systems, The Sherwin-Williams Company, BASF SE, and AzkoNobel Inc.

In recent years, major players in the automotive refinish coatings market have taken several strategic measures, such as product launches, acquisitions, and geographical expansions, to gain a competitive edge in the industry. For instance, in October 2017, The Sherwin-Williams Company introduced a clearcoat, CC200, which offers good performance with reduced time.

Based on Auto Type