During the forecast period, the automotive LiDAR market is expected to exhibit the fastest growth in the APAC region. This is credited to the swift technological advancements in the automotive industry, coupled with the expected imposition of mandatory policies in the regional countries, to make vehicles safer. 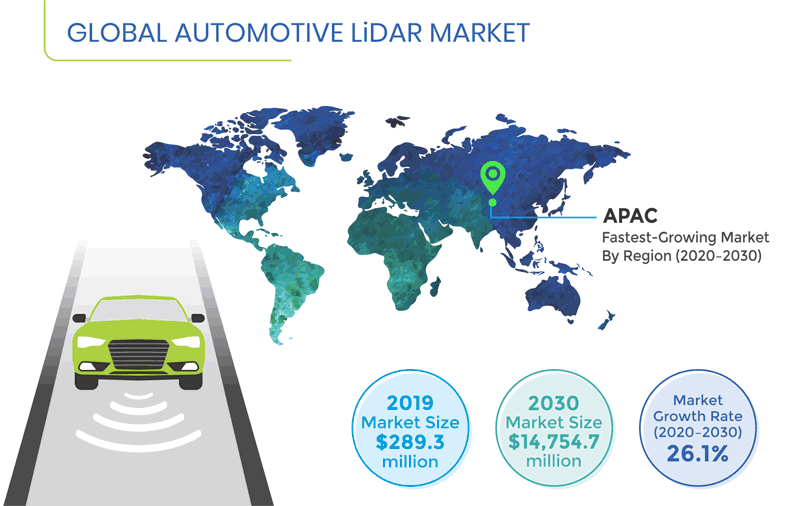 The superior performance of LiDAR sensors has been attracting heavy investments across the world, aimed at enabling their development and adoption, which is a major trend being witnessed in the automotive LiDAR market. For instance, in July 2019, Luminar Technologies Inc. received an investment of $100 million, led by G2VP LLC, Moore Strategic Ventures LLC, and The Westly Group, thereby taking the company’s total funding past $250 million, till date. With this investment, the company has developed a new LiDAR platform, named Iris, with the intention to generate low-cost LiDAR solutions for commercial trucks. Further, in January 2020, Hesai Photonics Technology Co. Ltd. received $173 million, as part of its Series C funding round, led by Robert Bosch GmbH, Lightspeed Ventures LLC, ON Semiconductor Corp., Qiming Venture Partners, and DT Capital Partners.

The supportive government regulations, regarding mandatory vehicle safety requirement fulfilment, in different countries across the world, is a major driver for the growth of the automotive LiDAR market. For instance, the European Union (EU) has mandated several driver assistances features in vehicles, including advanced emergency braking, emergency stop signal, and intelligent speed assistance, for member countries. Similarly, in 2018, the National Highway Traffic Safety Administration (NHTSA) proposed the inclusion of automatic emergency braking in vehicles, in the U.S. These mandatory safety features are highly reliant on LiDAR sensors, for effective functioning; thus, with the implementation of such strict regulations, the demand for these sensors is expected to be spur. 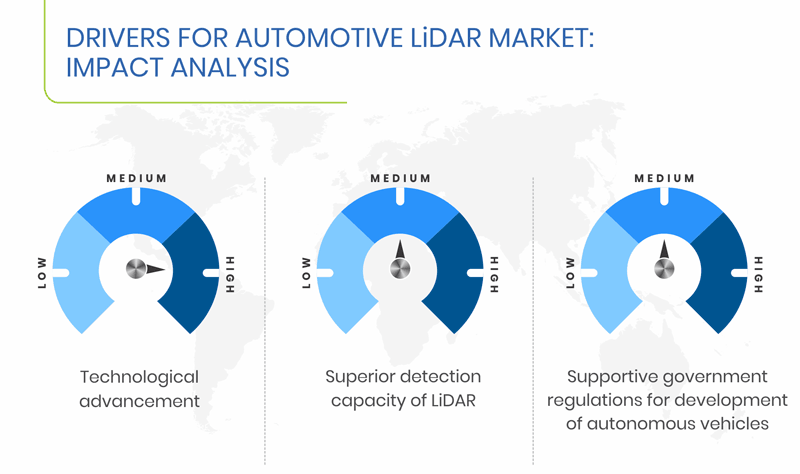 Semi-autonomous vehicle was the larger category in the automotive LiDAR market, during the historical period (2014–2019), based on vehicle autonomy. The fully-autonomous vehicle category is expected exhibit the faster growth between 2023–2030. The growth of this category would be majorly fueled by the adoption of level 4 and level 5 autonomous cars for sharing services, across the world. For instance, several vehicle manufacturers and technology providers, such as Tesla Inc. and Waymo LLC, have been working on robotaxis, which are expected to be launched by 2025. These taxis will be mainly utilized for ride hailing services, which would boost the adoption of fully-autonomous cars, thereby driving the demand for LiDAR sensors in this category.

The automotive LiDAR market is predicted to witness the fastest growth in the automatic emergency braking system category, on the basis of application. Automatic emergency braking systems are crucial for preventing accidents, by identifying perilous situations early and warning the driver, as well as helping in reducing the severity of the crash, in cases where the accident cannot be prevented. These features make it one of the most crucial parts of an autonomous vehicle, thereby propelling the demand for LiDAR sensors in this category. Moreover, many countries in the world have made this feature mandatory in the new vehicles being produced, which is further expected to drive the growth of this category in the coming years.

Geographically, Europe was the leading market for automotive LiDAR during the historical period. This is attributed to the EU’s initiatives to mandate the installation of LiDAR-based ADAS features in the vehicles, for enhancing their and passengers’ safety. Moreover, the market in Europe has been widely facilitated by the early adoption of advanced autonomous technologies. Major automakers in the region, such as Bayerische Motoren Werke (BMW) AG, Ford Motor Company, and Volkswagen AG, are actively involved in research and development, for the evolution of autonomous technologies. For instance, in November 2018, Volkswagen AG announced an investment of around $50 billion (EUR 44 billion) for a period of five years between 2018 and 2023, for the development of autonomous cars and new mobility services. Further, the region is witnessing several partnerships and collaborations between major companies, thereby boosting the development of advanced autonomous technologies, which has further contributed in the dominance of the region on the automotive LiDAR market.

In recent years, the major players in the global automotive LiDAR market have undertaken several strategic measures, such as investments, partnerships, and service launches, to gain a competitive edge in the market. For instance, in January 2020, Robert Bosch GmbH introduced a long-range LiDAR sensor for autonomous vehicles, to measure the distance from target objects, by illuminating them with laser light and measuring the reflected pulses. Similarly, in March 2019, Alphabet Inc.’s self-driving car unit, Waymo LLC, announced that it has entered the automotive sensor business and has begun to sell laser-mapping sensors to other companies, which are to be used in its driverless vehicles. Moreover, the development was intended to cut the cost of manufacturing self-driving vehicles.