The automotive electronics market revenue stood at $235.7 billion in 2019, and it is predicted to rise to $615.3 billion by 2030. Furthermore, the market is predicted to progress at a CAGR of 9.3% between 2020 and 2030. The key factors driving the expansion of the market are the soaring sales of vehicles and increasing implementation of government regulations and policies in several countries for making vehicles fuel-efficient and safer. 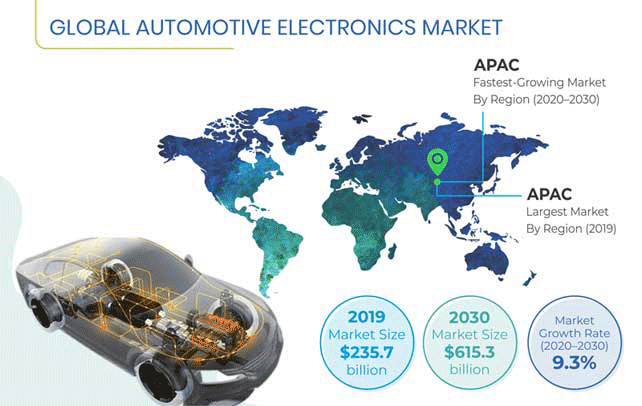 In 2019, the current carrying device category had the largest share in the automotive electronics industry, under the component type segment. This was because a vehicle contains nearly 200 electronic fuses and switches, and without these components, automobiles cannot work.

The driver assistance system category is predicted to demonstrate the fastest growth in the forthcoming years, based on system. This is credited to the surging requirement for driver assistance systems due to the growing deployment of autonomous vehicles around the world. As these systems are necessary for the smooth functioning of autonomous vehicles, particularly the ones equipped with level 5 automation features, the sale of automotive electronic components will surge sharply because of the increasing deployment of these vehicles across the world.

From 2014 to 2019, the passenger car category, under segmentation by vehicle, dominated the automotive electronics market. This was ascribed to the fact that passenger cars accounted for nearly 70% of the total automobile sales all over the world in 2019. Moreover, any newly developed automotive technology is first implemented and integrated into passenger cars.

The aftermarket category is expected to exhibit the faster growth in the market for automotive electronics in the upcoming years, under the distribution channel segment. This will be a result of the fact that people are rapidly getting their older vehicles retrofitted with new electronic systems at service centers and garages, on account of the enactment of strict vehicle safety and fuel emission norms.

Geographically, the Asia-Pacific (APAC) region was the largest procurer of automotive electronic components in 2019. This was because of the huge production of automobiles in regional countries, such as India, China, South Korea, and Japan, on account of the abundant availability of affordable labor and raw materials. As a result, many leading automakers from all over the world have set up manufacturing plants in regional countries, which has made vehicles cheaper for inhabitants. 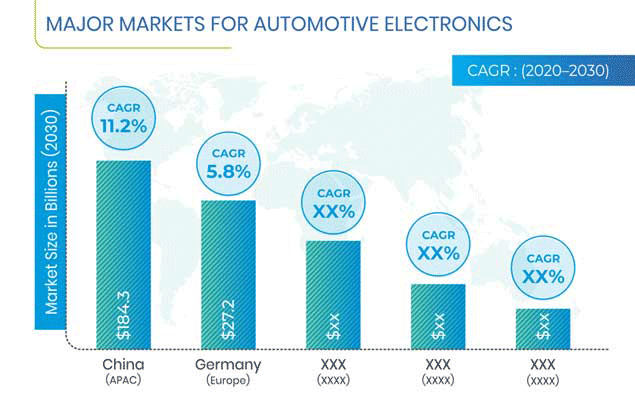 The incorporation of integrated cockpit systems in automobiles is one of the major automotive electronics market trends. Unlike conventional cockpits, wherein the driver is required to manually control functions such as those related to infotainment, heads-up displays (HUD), navigation, voice assistance, embedded virtualization, and smart heating, ventilation, and air conditioning (HVAC), in an integrated cockpit, multiple screens are used for displaying the vehicle data, thereby providing greater convenience to the driver. Moreover, automobile manufacturing companies, such as Daimler AG, Bayerische Motoren Werke AG (BMW), Tata Motors, General Motors Company, and Toyota Motor Company, have begun incorporating these components in their vehicles on account of the rising customer preference for them. 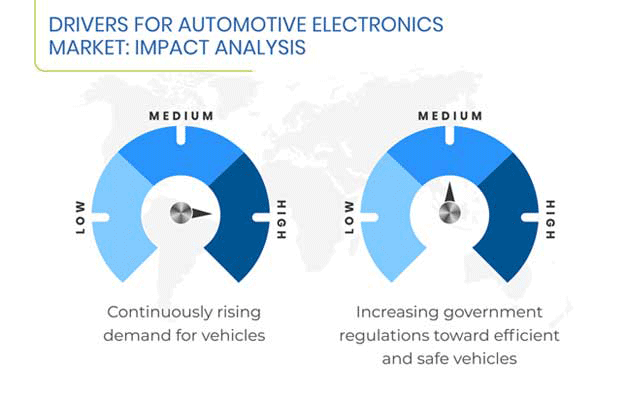 One of the major factors fueling the expansion of the market is the soaring sales of automobiles across the world. Currently, automotive electronics account for nearly 35% of the total cost of an average vehicle, compared to an only 5% share in 1970. Moreover, this share is predicted to grow to as much as 50% by 2030.

As per the observations of Organisation Internationale des Constructeurs d'Automobiles (OICA), 95.1 million automobiles were sold around the world in 2018, with this number growing at a CAGR of 1.8% from 2014 to 2018. The soaring sales of automobiles, especially electric and autonomous vehicles, are predicted to propel the automotive electronics market growth in the coming years.

The increasing usage of advanced driver assistance systems (ADAS) is creating lucrative growth opportunities for the players operating in the market for automotive electronics. The growing incidence of road accidents and, resultingly, the concerns being raised over vehicle and passenger safety are fueling the demand for ADAS. Such systems reduce the chances of driver negligence, which, in turn, mitigates the occurrence of road accidents. Tesla Inc. claimed in its 2019 Q4 report that the accident rate of its automobiles was four times lower than the average rate in the U.S., after they were integrated with ADAS.

In the recent years, several players in the automotive electronics market have looked at partnerships as a means to develop advanced automotive electronics that can make vehicles safer. For instance, in January 2019, Mobileye NV and Valeo SA began co-creating a new safety standard for autonomous vehicles, whichis centered around Mobileye’s mathematical safety model.

Similarly, NTT Communications Corp. and DENSO CORP., in December 2019, announced that by January 2020, they would begin the testing of their jointly developed vehicle security operation center, which studies the security status of vehicles. This will allow the companies to come with better security features for connected cars. 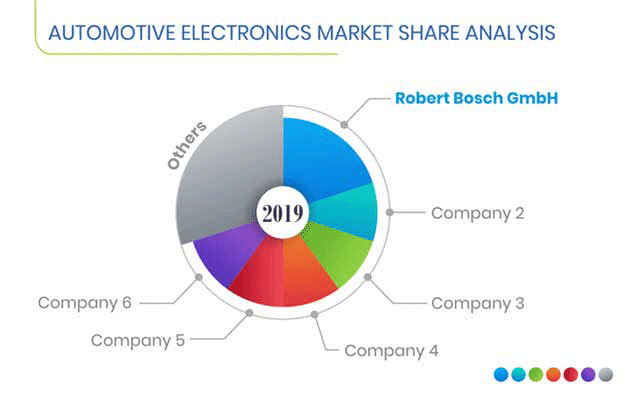 Based on Component Type