The global automotive ambient lighting market revenue was $3,203.8 million in 2021, and it is expected to reach $7,087.5 million by 2030, at a CAGR of around 9.2% during 2021–2030. The APAC market is largely driven by the increasing demand for economy vehicles, which are the largest users of reading lights, roof console lights, and car body lights. 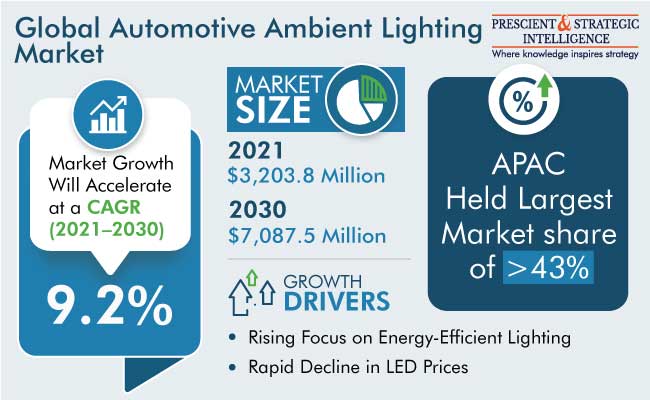 Furthermore, the surge in the sale of ultra-luxurious automobiles, especially those equipped with infotainment and navigation systems, as a result of the increasing disposable income, will emerge as the key driver for the market. Moreover, the wide availability of automotive aftermarket solutions and the ever-expanding market for LED lights in automobiles, as well as the shifting preference toward safety and comfort, will bolster the market value over the forecast period of 2022 to 2030.

The LED technology held the largest revenue share in 2021, of around 71.9%. The increasing demand for LED lighting solutions has become a prominent market trend, since an LED light consumes 50% less energy to create the same amount of light as compact fluorescent lamps (CFLs) and cold cathode fluorescent lamps (CCFLs). The reduced electricity use can directly reduce yearly CO2 emissions by around 700 million metric tonnes. Furthermore, LEDs do not emit UV rays and are much environment-friendly. Owing to these properties, LEDs have become increasingly feasible for ambient lighting, thus boosting the expansion of the market.

The halogen technology is also expected to show substantial automotive ambient lighting market demand growth in the coming years. This will be due to the low cost and ready access to this technology, which also adds an aesthetic appeal to the vehicle's interior. Furthermore, owing to their standard design, halogen lamps are simpler to use and install, and they also have a distinct feature, namely the "plug-and-play" function. 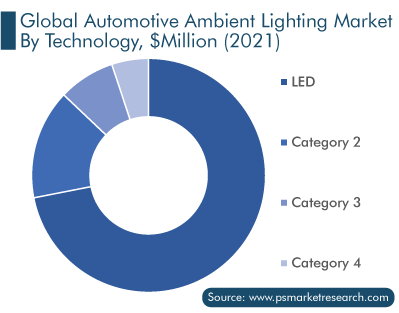 Due to Want for Luxury and Comfort, Dashboard Ambient Lighting Market To Witness Fastest Growth

Dashboard lights are expected to dominate the industry throughout the forecast period, with the category witnessing the fastest CAGR, of 9.6%, between 2021 and 2030. With the rise in the installation of ambient lighting owing to the increasing emphasis on comfort and luxury, dashboard ambient lighting demand is expected to grow at a high pace, which will further assist the automotive ambient lighting market in booming.

For instance, in North America, the rise in the passenger car penetration and progress toward autonomous vehicles have expanded the adoption of advanced lights in dashboards, such as the augmented reality system, which is available in the VW ID3 with ambient lighting. This will further enhance the entertainment experience and the way the information is presented in the cockpit, as well as ensuring optimal comfort and driver concentration.

The heads-up display category, in the product type segment, will also show substantial growth during the forecast period. The increasing need for displaying vehicle information to drivers without creating a distraction is associated with the market’s growth. 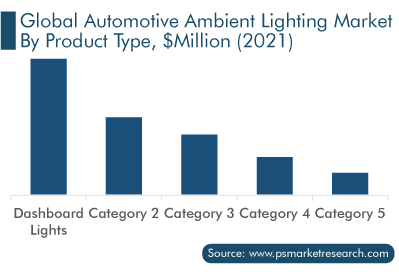 Initially, the functional uses of automobile interior illumination were prioritized, such as good orientation and visibility. With the growing need for interior lighting, mood, wellbeing, and character are all being considered. This is credited to the rising demand for personalized illumination that adjusts to the preferences of individuals. It is expected that there would be a higher accumulation of functional and emotional features in vehicles in the future. Almost no part of the car's interior will be overlooked, with the major aim to generate added worth in the lighting segment through emotional, functional, and aesthetic aspects.

For instance, luxury brands, such as Mercedes-Benz, Lexus, and BMW, have bright and appealing ambient lighting options for current automobiles. Ambient lighting is also common among other high-end vehicle brands, such as Bentley and Rolls-Royce. They elevate grandeur by utilizing ambient lighting to produce stunning visual effects. Rolls-Royce, for example, uses fiber-optic strands implanted in the headliner to transform it into the night sky. Similarly, the door speakers of the high-end sound systems in Bentleys are lit to showcase precise features.

The North American region is the third-highest revenue generator in the market. The automotive ambient lighting market in North America was valued at $633.9 million in 2021, and it is expected to reach $1,343.4 million by 2030, growing with a CAGR of 8.7% during the forecast period. The government measures to encourage the adoption of connected and autonomous cars are likely to improve the adoption rate of ambient lighting systems in the region.

For instance, in September 2021, the Canadian Vehicle Lighting Regulation adopted new lighting regulations for tail lights with daytime running lights (DRLs), black dashboards that warn the driver to turn on the lights, and side marker lights that automatically switch on in the dark.

The market has the presence of several key players, who, in recent years, have been involved in various strategic developments in order to stay ahead of their competitors. For instance:

Frequently Asked Questions About This Report
What is the current size of the global automotive ambient lighting market?+

What are the segments of the automotive ambient lighting industry?+

What is the outlook for the automotive ambient lighting market?+

With the continuous advancements in interior designs, the prospects for the market for automotive interior ambient lighting are bright.

What is the largest category in the automotive ambient lighting industry by technology?+

Who are the key users in the automotive ambient lighting market?+

The key users in the market for automotive ambient lighting are luxury carmakers, such as BMW, Audi, Rolls-Royce, Lexus, Bentley, and Mercedes-Benz.