The Asia-Pacific (APAC) gene therapy market valued $349.1 million in 2020, which is projected to progress at a CAGR of 36.8% during the forecast period (2021–2030). The major factors responsible for the growth of the market include the increasing gene therapy development activities, surging burden of chronic diseases, and growing number of clinical trials with positive results.

Due to the current COVID pandemic, governments worldwide have implemented strong measures, such as lockdowns and social distancing, to contain the emanating health threats. Manufacturers across APAC, including those of gene therapies, have been moderately impacted by the economic crisis triggered by the pandemic. Clinical trials and the related activities were halted for a limited time in 2020 in China and Japan, thus having a moderately negative impact. However, by the end of 2020, the development of such therapies resumed, thus leading to an increase in their adoption. 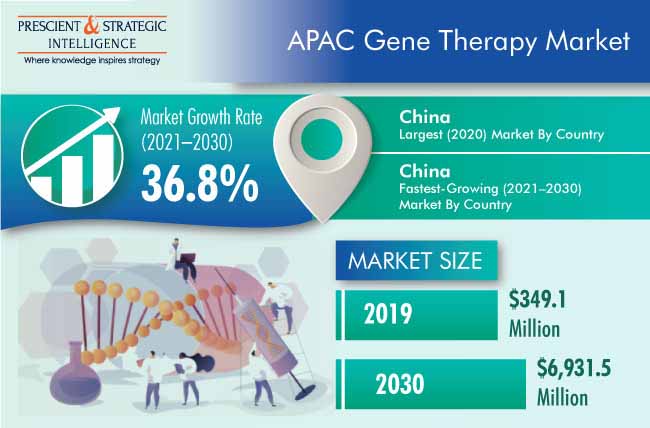 Due to Less-Cumbersome Administration Process, In-Vivo Category To Dominate Market

The in-vivo category held the larger share in the gene therapy market during the historical period (2015–2020), and it is expected to retain its position in the upcoming years, based on type. This is attributed to the less-cumbersome administration process of in-vivo therapies compared to ex-vivo gene therapy, which requires the removal of cells out of the patient’s body, to be genetically modified.

Due to High Levels of Expression, Adenovirus Category To Witness Fastest Growth

The adenovirus category is expected to witness the fastest growth during the forecast period, based on vector type. This will mainly be due to the high level of expressions and high transduction efficiency of such vectors.

The carcinoma category dominated the gene therapy market in the region, based on application. According to the Global Cancer Observatory (GLOBOCAN), 2.3 million cases of cancer were reported in Southeast Asia and 1.4 million people lost their lives due to it in 2020. Also, the wide range of portfolio of drugs available to treat cancer has created more demand of such therapies such as Gendicine, which was the first approved gene therapy, in the region.

Due to Rising Research and Development Investment, Pharmaceutical and Biotechnology Companies Dominated Market

The pharmaceutical and biotechnology companies’ category held the larger share under the end user segment of the gene therapy industry during the historical period, and it is expected to maintain the lead in the coming years. This will majorly be due to the rising R&D investments, along with the active use of gene therapy for a number of disease applications.

China generated the highest revenue in the gene therapy industry in 2020, and it is expected to maintain its position in the coming years. This is majorly ascribed to the rising number of strategic developments among key companies and increasing incidence of cancer and rare diseases. For instance, in March 2019, Merck & Co. Inc. signed a non-binding memorandum of understanding (MoU) with GenScript Biotech Corporation, a Chinese biotech company, for a strategic alliance focusing on plasmid and viral vector manufacturing. The alliance is helping accelerate the commercialization of cell and gene therapies in China. 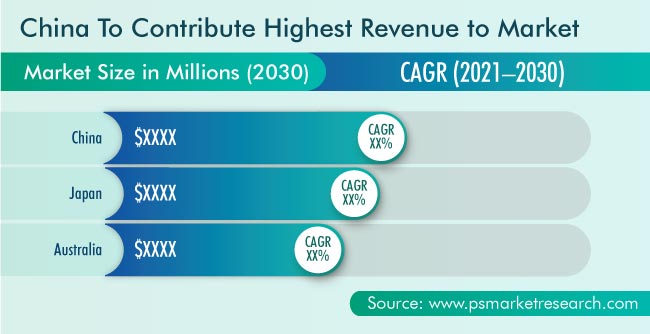 The gene therapy market is witnessing rapid evolution with the development and launch of new products. For instance, in January 2021, Amgen Inc. received the Breakthrough Therapy Designation (BTD) for its investigational KRASG12C inhibitor, Sotorasib, from the Center for Drug Evaluation (CDE) of the National Medical Products Administration (NMPA) of China. The designation allows for the treatment of patients with KRAS G12C-mutated locally advanced or metastatic non-small-cell lung cancer (NSCLC), who have received at least one prior systemic therapy. 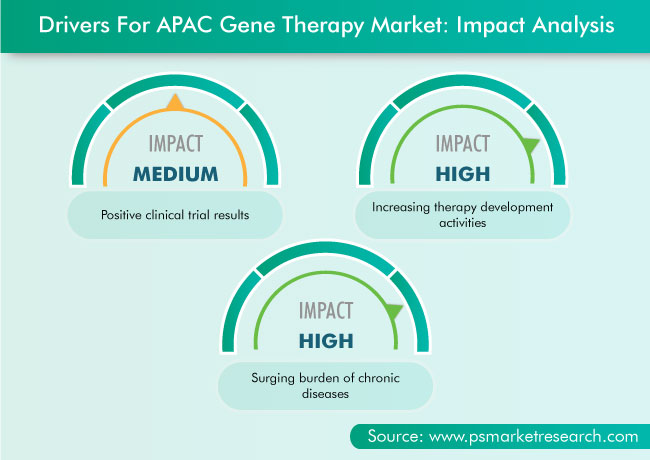 The recent positive results of gene therapy studies and clinical trials are likely to encourage biopharmaceutical companies to focus on entering the gene therapy market. For instance, in May 2020, Applied Genetic Technologies Corporation (AGTC) announced the positive interim Phase I/II clinical trial results, which helped decide the dose to be used in its ongoing clinical trial on patients with X-linked retinitis pigmentosa (XLRP) due to mutations in the RPGR gene. The data demonstrated that the company’s proprietary adeno-associated viruses (AAV) vector and engineered RPGR constructs were well tolerated and had beneficial effects on the markers of the disease in a canine model of XLRP. Moreover, the patients treated showed significant improvement in visual function.

The increasing participation of public and private research organizations in gene therapy research is boosting the growth of the gene therapy market in APAC. Due to the rapid technological advancements over decades, the development of gene therapies has regained significant interest. This process is being accomplished by the optimization of vectors, such as retroviruses and lentiviruses, by the introduction of new techniques, such as induced pluripotent stem cells, in combination with the current models of gene editing and even by trials in germ cells. Therefore, with the increasing number of research activities, the demand for gene therapy has increased.

In recent years, players in gene therapy industry have undertaken product launches to offer a better portfolio than other players.

Based on Vector Type

Frequently Asked Questions About This Report
What will be the 2030 size of the APAC gene therapy market?+

What is the more-popular therapy type in the APAC gene therapy industry?+

In the APAC gene therapy industry, in-vivo therapies are preferred.

The best opportunities for investments in the APAC market for gene therapy are available in China.

Why is the APAC gene therapy industry growing?+

The APAC gene therapy industry is growing because of the rising incidence of chronic diseases and increasing number of R&D activities and clinical trials.

What is the key strategic measure in the APAC gene therapy market?+

Product launch is the strongest strategy among players in the APAC market for gene therapy.