The global active pharmaceutical ingredient (API) market generated $184,311.2 million revenue in 2020, and it is expected to grow at a CAGR of 6.9% during the forecast period (2021–2030). The key factors responsible for the growth of the market include the rising geriatric population, increasing incidence of chronic diseases, and surging importance of generics.

The COVID-19 outbreak has spread to almost every country, due to which the number of infected patients is rising, which is straining the countries’ healthcare ecosystem and resources. This is mainly on account of the intensifying demand for healthcare facilities, workers, and most importantly, medical equipment, devices, drugs, and research studies. Moreover, the pandemic resulted in an immense increase in the cost of drugs. In India, according to the Pharmaceutical Export Promotion Council (PHARMEXCIL), which functions under the Ministry of Commerce and Industry, the cost of the API penicillin increased to $8.69 per unit in February 2020 from $6.16 per unit in January 2020. Further, the data collected by manufacturers operating in the API market indicated a 13–18% rise in the prices of APIs for many other antibiotics, such as azithromycin, doxycycline, amikacin, ornidazole, and dexamethasone sodium, most of which India imports from China. 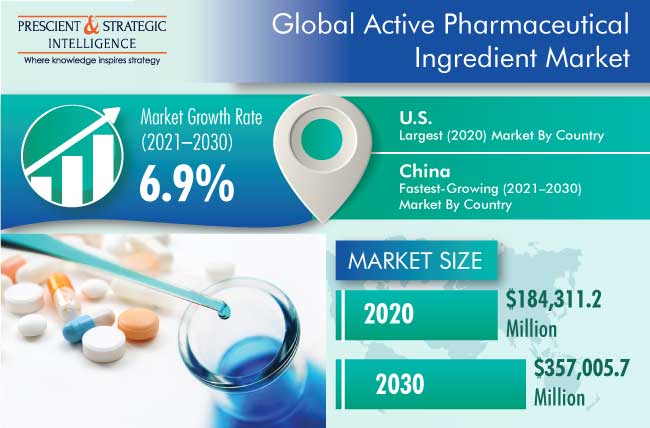 Prescription Drugs Category Held Larger Share, due to Increasing Demand for these Drugs

The prescription drug category held larger share in 2020 in the active pharmaceutical ingredient market, based on type of drug. This is majorly attributed to the increasing demand for prescription drugs for the management of chronic diseases, across the world.

The oncology category accounted for the largest share in the active pharmaceutical ingredient market in 2020, based on therapeutic application. This is primarily due to the high prevalence of cancer and increase in demand for highly potent APIs (HPAPIs) for the treatment of cancer. According to the American Cancer Society, around 1.9 million new cancer cases and 608,570 cancer-related deaths are expected to be reported by the end of 2021. Similarly, according to a report by the World Health Organization (WHO), 2,003,789 cases of different types of cancer were reported in Southeast Asia and 1,336,026 people lost their lives due to them in 2018.

Offline Category To Witness Faster Growth in the Forecast Period

The offline category is expected to witness faster growth in the active pharmaceutical ingredient market during the forecast period, based on distribution channel. This will primarily be due to the high sales of APIs via this channel, owing to the increasing number of contracts with API providers and drug manufacturing companies, and established offline distribution channels of the providers.

North America is expected to hold the largest share in the active pharmaceutical ingredient market in coming years, owing to the surging incidence of chronic diseases, increasing government focus on generic drugs, rising demand for biologics and specialty drugs, mounting number of pharmaceutical R&D activities, and increasing technological advancements. Additionally, people are becoming aware about various lifestyle-associated diseases, which is further driving the market progress in the region. According to the Centers for Disease Control and Prevention (CDC), chronic diseases cost $3.5 trillion in 2018 to the U.S. healthcare system. Additionally, according to an article published by the Partnership to Fight Chronic Disease (PFCD), around 45% of the U.S. population has at least one chronic ailment, and by 2025, around 165 million Americans will be suffering from more than one chronic diseases. 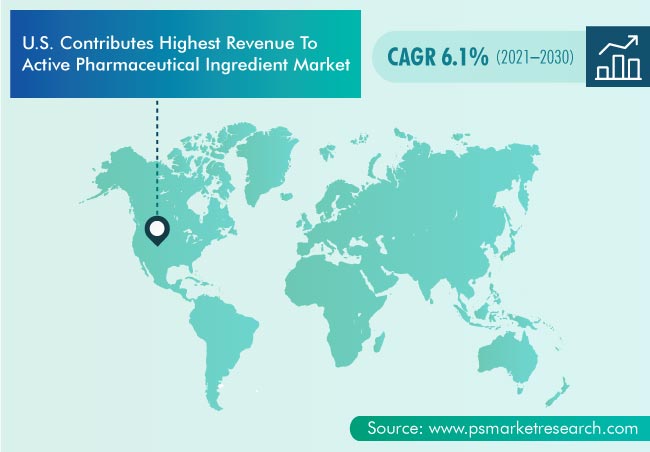 The major players operating in the market for active pharmaceutical ingredient are focusing on partnerships and mergers & acquisitions in order to expand their business in new and developing markets and earn a competitive advantage. For instance, in August 2020, Pfizer Inc. announced a multi-year agreement with Gilead Sciences Inc. to manufacture and supply Gilead’s investigational antiviral remdesivir, to support efforts to scale up the supply of the investigational treatment for COVID-19. Remdesivir, which is used to relieve symptoms in people experiencing COVID-19, also helps in stopping the virus from spreading inside the body. 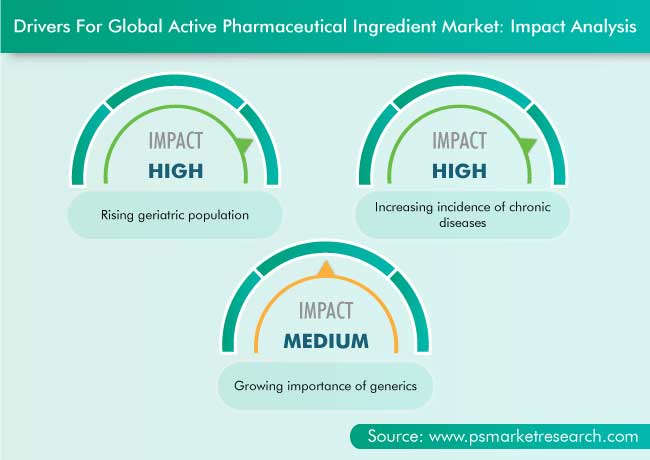 The increasing life expectancy and falling death rates are the major contributors to the growth of the geriatric population. According to a report by the WHO, people are living longer as the average life expectancy has increased. This has led to a huge growth in the world’s aged population. According to the World Population Ageing Report published in 2019, the number of people aged 65 years and above stood at around 703 million, and this population is expected to reach 1.5 billion by 2050. The elderly people require extensive care, as they are highly prone to illnesses, owing to their low immunity level and longer recovery time. Owing to the intensive care required for geriatric population, healthcare settings are increasingly adopting technologically advanced API products, which, in turn, is boosting the growth of the market for active pharmaceutical ingredient, globally.

In recent years, the players in the API market have been involved in product launches, in order to attain a significant position in the market. For instance:

Based on Type of Manufacturer

Based on Type of Synthesis

Based on Type of Drug

Frequently Asked Questions About This Report
How much will the active pharmaceutical ingredient (API) market value in 2030?+

Which is the most-significant type of drug in the API industry?+

Prescription drug is the larger category under the type of drug segment of the API industry.

What are the key drivers for the API market?+

What is the regional scenario in the API market?+

Which is the strongest strategic measure among players in the API market?+

Most API market players are adopting collaborations and partnerships strategy to sustain their business growth.