The growth can be primarily ascribed to the rising geriatric population, increasing number of branded drugs losing their patents, surging cases of chronic and acute diseases, growing R&D expenditure of biotech and pharma companies, and lower cost of non-patented pharmaceuticals than branded ones. For instance, phenytoin is the common name, while Dilantin is a brand name, for the same anti-seizure drug. 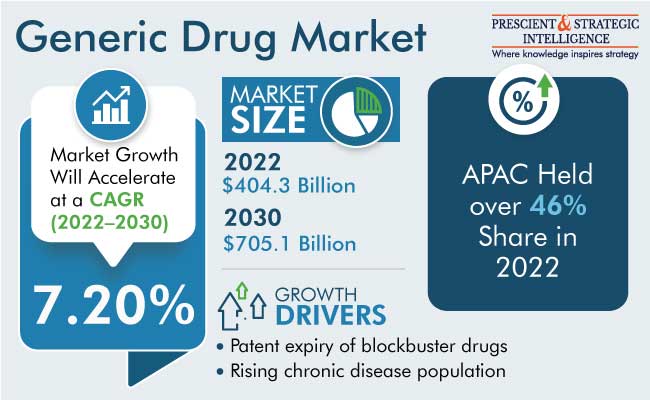 The simple category is expected to witness the fastest growth, at a CAGR of 8.4%, during the forecast period. The growth can be attributed to the rising preference for this type of non-patented medication due to its lower development cost than the other types. Moreover, this type has larger acceptance among patients and doctors due to its known mechanism of action and predefined efficacy and safety profile.

Moreover, the oral category is expected to dominate the generic drugs market over the next few years. This route of administration is preferred by patients due to its ease and painlessness. For this reason, a large number of medicines are designed to be administered orally. For instance, Accolate, Ciloxan, and Cardura are oral non-patented medications used to treat asthma, eye infections, and hypertension, respectively. 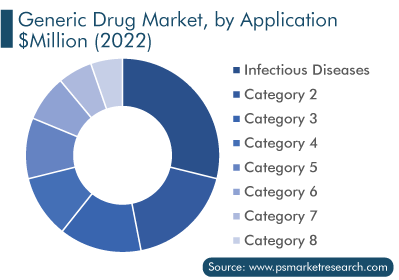 The indirect category is expected to witness a CAGR of 7.5% during the forecast period, due to the surging cases of chronic diseases and the rising number of hospitals, clinics, and pharmacies across the globe. For instance, in India, there are more than 38,000 hospitals.

The Asia-Pacific (APAC) region generated the highest revenue in 2022, and it is expected to maintain its position in the coming years. This is majorly ascribed to the growing healthcare expenditure, increasing cases of chronic diseases, government initiatives to promote generics usage, and rising geriatric population. In this region, China and India contribute significantly more revenue than the other countries. For instance, according to the United Nations Population Fund (UNFPA), one in four individuals in APAC will be over 60 years of age by 2050, which is indicative of a huge boom in the demand for non-patented medications. 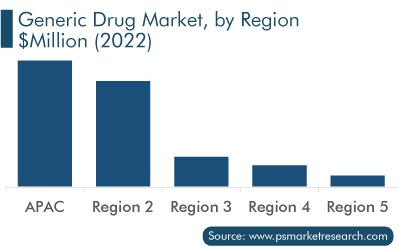 India is expected to be the fastest-growing market in the region over this decade. As per the IBEF, India is the top supplier of generic pharmaceuticals in the world. Currently, the Indian pharmaceutical industry is ranked third by volume. Moreover, Indian pharmaceutical companies meet more than half the global demand for several vaccines, 40% of the generic demand in the U.S., and 25% of the requirement for all drugs in the U.K.

There are more than 3,000 pharmaceutical companies and more than 10,500 manufacturing plants in India. India is the 12th largest exporter of medicines across the world, catering to more than 200 countries and territories. Some of the major areas of focus for pharma companies in the country are drugs with expired patents, over-the-counter medications, bulk pharmaceuticals, and vaccines.

China dominated the APAC market, with a share of 45.9%, in 2022, and it is expected to remain in the lead during the forecast period. This is ascribed to China’s healthcare industry transformation, which is visible in the increase in R&D activities, along with production. In this regard, the country’s pharmaceutical industry is driven by the government subsidies and public insurance. Moreover, a U.S. Food and Drug Administration (FDA) study has revealed that more than 70% of the API facilities supplying the U.S. market are overseas, with 13% of those located in China. In all, in 2021, China had more than 5,000 pharmaceutical manufacturers and 4,000 API manufacturers.

Shift in Preference toward Generic Drugs

According to the World Bank, in 2020, the economy shrank by 5.2% globally, which was the worst recession since World War II. The falling economy affected the healthcare expenditure of individuals negatively and caused consumers to look for low-cost yet effective medications. Therefore, the generic drugs market would see a sudden expansion in its size, which would prove to be beneficial for the manufacturers of such medications.

Rising Number of Collaborations and Partnerships

Many pharmaceutical companies are entering into partnerships and collaborations to enhance their prominence as suppliers of medications the patents of which have expired in key markets, such as the U.S. and China.

For instance, in July 2021, Sandoz Inc. unveiled Ferumoxytol, to treat iron deficiency anemia (IDA). Moreover, in August 2020, Teva Pharmaceutical Industries Ltd. and Alvotech hf entered into a partnership for the commercialization of five biosimilar products in the U.S. market. A key factor encouraging pharma firms to focus on generics are the less production time and costs involved in these medications.

The increasing aging population is a key factor stimulating the growth of the market. According to a report by the World Health Organization (WHO), people are living longer and the average life expectancy of the population has increased. This has led to a huge rise in the geriatric population. As treatment with branded drugs costs a fortune, such patients are expected to prefer low-cost generic variants.

The rise in non-proprietary drugs’ approvals and their market entry have proved to be beneficial for healthcare systems and patients preferring cost-effective treatments. This is because the low cost of developing such pharmaceuticals results in their lower market prices compared to branded ones. This opportunity has been recognized by several pharma companies, which are now waiting for several blockbuster drugs to lose their patents. For instance, DULERA, which is marketed by Merck Sharp & Dohme Corp., lost its patent in December 2020; and FORADIL, a drug marketed by Novartis AG, lost its in November 2020.

The burden of chronic diseases has increased globally. According to the WHO, in 2020, chronic illnesses claimed up to three-quarters of the deaths worldwide. Globally, almost 71% of the deaths because of ischemic heart disease, 70% due to diabetes, and 75% because of stroke occur in LMICs. Moreover, the low health insurance coverage for chronic diseases, such as cancer, chronic obstructive pulmonary disease (COPD), and stroke, in emerging economies has created a high demand for the low-cost generics.

Based on Route of Administration

Frequently Asked Questions About This Report
What is the generic drugs market growth forecast?+

Which route of administration is the most popular in the generic drugs industry?+

Based on route of administration, the generic drugs industry is dominated by the oral category.

Which is the highest-revenue-generating region in the generic drugs market?+

APAC is the largest market for generic drugs.

How are the biggest drivers for the generic drugs industry?+

The generic drugs industry is driven by the patent expiry of blockbuster drugs and rising chronic disease population.

What was the COVID-19 impact on the generic drugs market?+

The market for generic drugs was impacted positively by the pandemic.