Tungsten Carbide Powder Market to Generate Revenue Worth $2,176.8 Million by 2023

Increasing Adoption of Tungsten Carbide Due to its Superior Properties

Tungsten carbide is nearly twice as stiff as steel, and exhibits high thermal conductivity and high resistance to indentations and scratches. It also displays good resistance to acetone, ethanol, gasoline, ethanol, ammonia, water, and weak acids. Owing to such properties of tungsten carbide, it is widely adopted in the defense, oil & gas, metalworking, automotive, and power generation industries. This drives the growth of the tungsten carbide powder market. 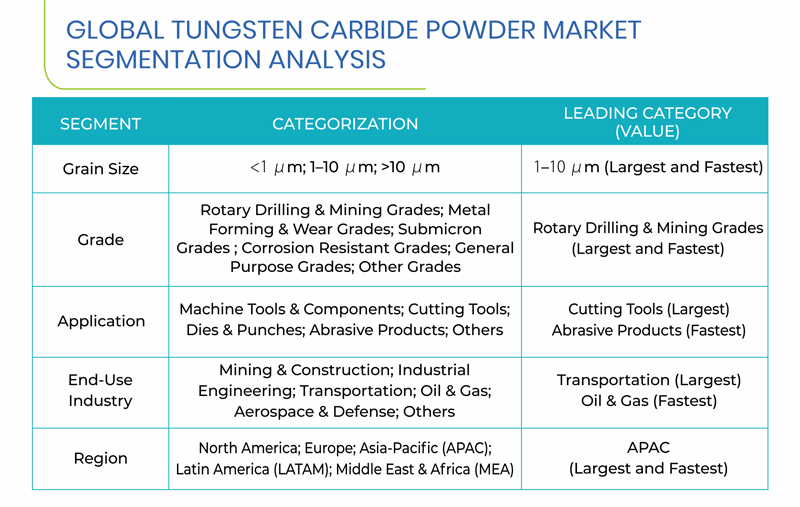 The 1–10 μm category held the largest revenue share in 2017. Tungsten carbide powder of grain size 1–10 μm is ideal for making variety of cutting tools, machine equipment, and abrasive products, owing to which it is used in large amount.

The rotary drilling & mining grades category is projected to witness the fastest growth during the forecast period, on account of their large-scale demand in the oil & gas, construction, and mining industries.

The cutting tools category accounted for the largest revenue share in 2017. This is ascribed to the wide use of tungsten carbide powder in manufacturing of cutting tools used in the automotive and construction industries for metal cutting ad stone working purposes.

The oil & gas category is expected to exhibit the fastest growth in the tungsten carbide powder market during the forecast period. This can be attributed to the increasing exploration & production (E&P) spending and shale gas exploration.

Together, APAC and North America are expected to account for over 70% share in the tungsten carbide powder market by 2023. This can be mainly attributed to the presence of established players, high demand for tungsten carbide from the automotive industry, and rise in shale gas exploration activities in these regions.

Germany is expected to lead the European tungsten carbide powder market over the forecast period. This can be mainly attributed to the high demand for this powder from automobile industry, as the country is the hub of major automobile manufacturers.

Brazil is the fastest-growing market for tungsten carbide powder in the LATAM region. Growing adoption of tungsten carbide and its derivatives in the automotive industry is the major factor contributing to the growth of the market in the country.