The amino category is expected to hold a significant share in the global market, during the forecast period, owing to the ability of amino silane to improve the chemical bonding properties of resins for usage in reinforcing materials and inorganic fillers. In addition, it reacts well with water, owing to which amino silanes are vastly used in the paints & coatings industry.

Mergers and Acquisitions Trending in the Market

Several manufacturers in the silane market have gone through mergers, acquisitions, and agreements of exclusive distributorship, which has resulted in fewer, but more-competent companies. For instance, in August 2016, Krahn Chemie GmbH entered into an agreement with SiSiB SILANES (Power Chemical Corporation). Under this agreement, KRAHN Chemie Deutschland GmbH agreed to distribute the organofunctional silanes produced by SiSiB SILANES, in Europe. Such agreements have led to consolidation and a high level of competition in the market.

Rise in the Demand for Silane-Treated, Water-Based Coatings to Drive the Market

In the recent years, there has been a rise in the demand for silane-treated, water-based coatings, for building interiors. Water-based coatings prevent evaporation in confined spaces, which makes them suitable for application in storage and railroad tanks. Such coatings offer several other advantages, such as smooth finish, high gloss, and less drying time, in comparison to traditional varnishes. With the rise in the consumption of water-based coatings in different industries, the silane market is expected to advance, owing to the requirement for the organic compound as a key raw material in their production. 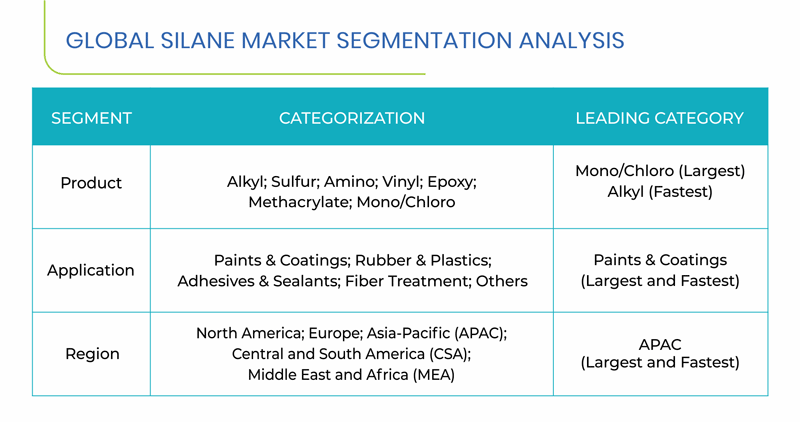 Mono/chloro accounted for the largest revenue share during the historical period, on the basis of product. This can be ascribed to the high-volume usage of silanes for the production of ultrapure silicon, for the semiconductor industry. It also witnesses a high demand as coatings for silicon and glass surfaces, as well as production of silicone polymers.

The alkyl category is expected to demonstrate the fastest growth in the silane market, during the forecast period, on the basis of product. This can be attributed to the heavy usage of alkyl silane in microelectronics and optoelectronics, glass and steel coatings, as well as flat-panel displays and solar cells.

The paints & coatings category, on the basis of application, is expected to grow the fastest in the silane market, during the forecast period. This is majorly ascribed to the high-volume usage of silane, as a raw material, in the production of paints for the construction and automotive industries. With the growth of these end-use industries across the globe, the demand for silane is also projected to increase during the forecast period.

APAC held the largest revenue share in the global silane market in 2017, and the trend is likely to continue throughout the forecast period. This is majorly attributed to the high demand for silane for the manufacturing of adhesives & sealants, paints & coatings, and rubber & plastics. Moreover, the construction sector in the region is witnessing growth, on account of the heavy investments by the governments of many countries here, in order to provide affordable housing to all.

In order to garner a larger share, the market players are involved in several strategic activities. For instance, in July 2016, Evonik Industries AG opened a new competence center for the development of silanes, at its Rheinfelden site in Germany.