Quantum Computing Market to Generate Revenue Worth $1,866.8 Million by 2030

The global quantum computing market was valued at $89.6 million in 2019 and is expected to post $1,866.8 million by 2030, growing at a CAGR of 33.1% during the forecast period (2020–2030). The machine learning (ML) category under application segment is expected to record the fastest growth during the forecast period. This can be primarily owing to the large potential of ML technologies that can be incorporated with the quantum computing systems for enhancing their use case.

Government bodies and other experts are displaying support for commercialization of quantum computing with several initiatives being undertaken to promote the same. Professionals are recognizing the criticality of developing a coordinated strategy to fund quantum-related research and education efforts. In December 2018, the National Quantum Initiative Act was passed into law. Under this Act, $1.2 billion was allocated to the National Quantum Initiative Program by the U.S. House of Representatives to establish goals and priorities for a 10-year plan to accelerate the development of quantum information science (QIS) and technology applications.

Moreover, a focus on establishing standards for quantum technology is being noted in the quantum computing market. For instance, IEEE Standards Association Quantum Computing Working Group is developing several standards, wherein primarily, the two standards to be noted are: definitions and nomenclature to bring commonality to the language used for the technology, and performance metrics and benchmarks to enable the performance of quantum computers to be measured against classical computers.

The physical challenges to implement this technology is currently significantly high. Quality of qubits, measurement challenges, decoherence, noise and error management, and temperature measurement are some of the factors that presently pose constraints to the technology’s development and require certain levels of precision. Hence, quantum computers are exceedingly difficult to engineer, build, and program, owing to high-physical restraints whilst development of technology. As a result, several errors occur in the form of noise, faults, and loss of quantum coherence, which are important to their operation.

Also, quantum error correction schemes do exist, but consume such a large number of qubits that relatively few qubits ultimately remain for actual computation. This reduces the size of the computing task to a tiny fraction of what could run on defect-free hardware. Furthermore, manipulations at nanoscale and operating either in a vacuum environment or at cryogenic temperatures, are also not feasible, and hampers the development of the technology and thus the market growth. 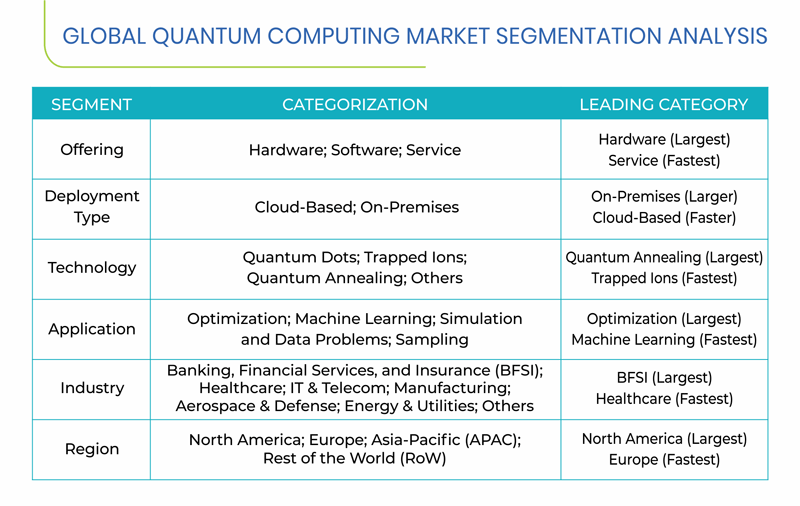 Together, North America and Europe are expected to hold almost 78% share cumulatively in the quantum computing market in 2030. All the major investments are being recorded in the U.S., Canada, Germany, the U.K., and Russia. In the U.S., National Aeronautics and Space Administration (NASA), the National Security Agency (NSA), and the Los Alamos National Laboratory are involved in this technology related projects. Furthermore, the regions are exhibiting an accelerating number of partnerships and collaborations, along with a rising number of start-ups investing into and developing quantum technologies. North America is expected to continue to lead the market throughout the forecast period, where the European market is projected to register the fastest growth.

Over 130 companies and research institutes are known to be engaged in R&D related to this technology. In the area of quantum computer hardware systems, privately funded firms, such as D-Wave Systems Inc. and Rigetti & Co. Inc.; and large IT firms, such as Microsoft Corporation, Alphabet Inc., and IBM Corporation, have announced laboratory projects focusing on the development of quantum computers. For instance, Google LLC has been working with NASA and the Universities Space Research Association to establish the Quantum AI Laboratory, using the quantum computers built by D-Wave Systems Inc. Besides, access to the quantum processor via cloud opens the market for new participants, encouraging the development of the quantum computing ecosystem.