Further, the onshore category is expected to witness faster growth over the forecast period. The market growth in this category is mainly driven by the increasing number of oilfields becoming mature and the fact that the majority of the oilfields are onshore.

Adoption of Automated Systems for Extraction of Oil Trending in Market

Computer technology is being integrated into exploration and production (E&P) operations to monitor and analyze pump systems, thus becoming a key trend in the pump jack market. Pump jacks must be able to extract even the last drop of oil, and as conventional pump jack systems require manual operation and monitoring, their efficiency can be limited. Recent technological advancements in the systems are allowing for more oil extraction, quick resolution of asset repair issues, and low downtime. 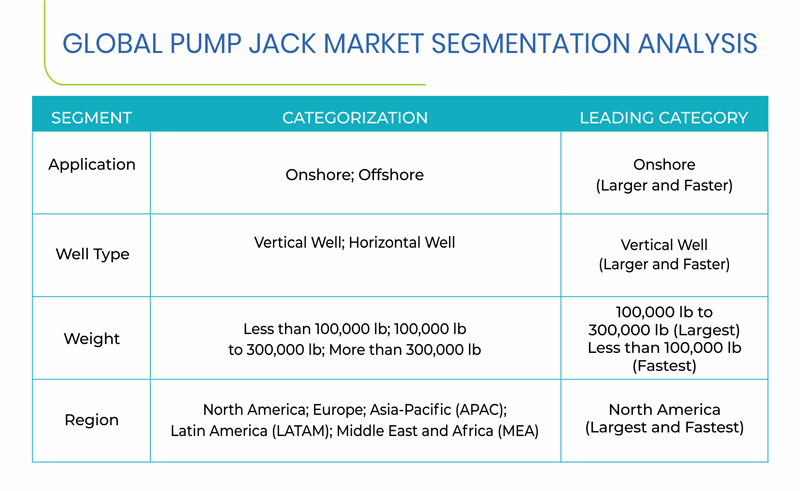 The onshore bifurcation in the pump jack market is expected to exhibit faster growth during the forecast period, in terms of value, on account of the fact that the majority of the aging mature wells are onshore, which is why the demand for pump jacks will be higher for onshore E&P operations.

Vertical well was the higher revenue-generating category in 2016, among the two well types. This can be ascribed to the fact that pump jacks were specifically developed for onshore vertical wells, the number of which is quite high around the world.

North America and APAC are expected to account for over 85.0% share in the global pump jack market by 2023. This can be mainly attributed to the presence of established players, higher number of mature oilfields compared to other regions, and rapid aging of oilfields.

Russia is expected to lead the European market, owing to the technological advancements in pump jack and aging mature oilfields.

Brazil is the fastest-growing pump jack market in the LATAM region. Huge oil reserves, increase in the average age of mature oilfields, and decline in the natural pressure of wells are the major factors contributing to the growth of the market in Brazil.

Due to the redevelopment of mature oil fields, the number of which is increasing, Oman is expected to hold a considerable share in the MEA region during the forecast period.

In October 2016, General Electric Company (GE) combined its oil and gas unit with Baker Hughes Company, to create advanced oilfield technology and provide better products and services to E&P companies. The largest overlap between the two companies was in the pumps for lifting oil from the wells. GE and Baker Hughes specialize in different technologies, suitable for different types of wells, which is why the deal is expected to add to the competition in the oil and gas industry, as with better pumps, E&P firms would look at higher oil and gas production volumes.