North America is expected to witness the fastest growth in the pump jack market, during the forecast period. This can be mainly attributed to the technological advancements in artificial lifting equipment, such as pump jacks and gas lifts. Additionally, continuous redevelopment of mature oil and gas fields is being done, as many of them have exhausted their natural pressure to pump up the fluid, after a long life. As per the European Parliamentary Research Service (EPRS), the U.S. had become the world’s largest producer of natural gas, accounting for almost 20% of the global gas production in 2012. The same year, the U.S. and Canada together accounted for 14% of the global oil production. 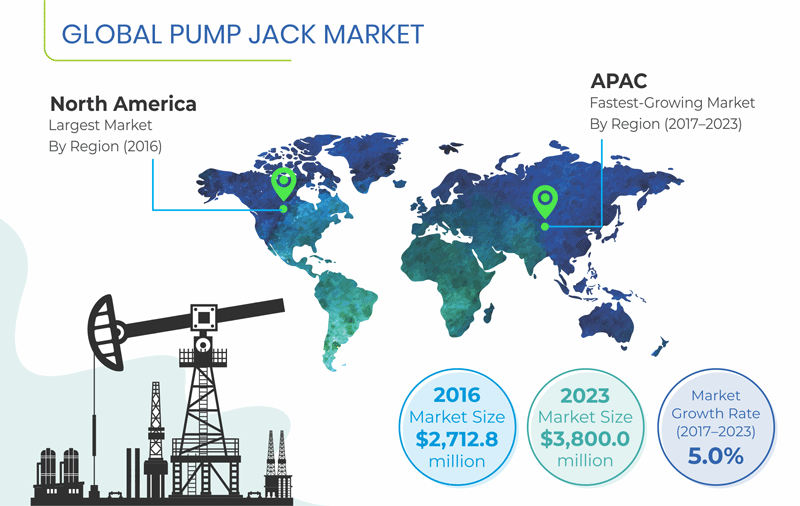 The increasing number of mature oilfields is leading to the growing demand for pump jacks in the petroleum industry. Most of the mature oil wells have already reached the level of saturation and are thus producing less oil. These wells cannot be economically restarted once they are shut down; hence, a majority of them are kept alive with pump jacks. such devices allow even the last barrel of oil to be extracted from the fields. The life of the wells can be extended by years, by improving the pumping efficiency, without adding any significant operational cost, which is enabled by pump jacks. The computer-based technology is now being used to monitor and analyze pump systems in real time, from far away, quickly, and with minimum human interference. The use of such automated solutions, for the efficient extraction of oil from mature oilfields, is being observed as a key trend in the pump jack market. 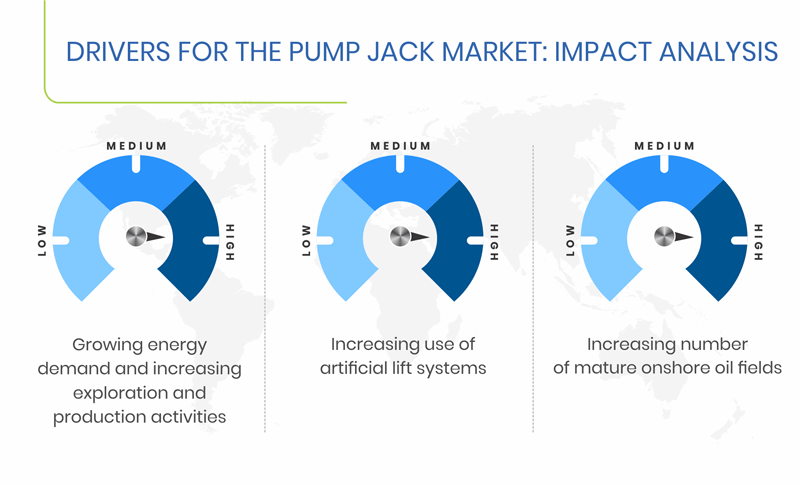 Innovations in the performance of pump jacks would offer a lucrative opportunity in the pump jack market. Nowadays, pump jacks are remotely monitored, which makes their operation more efficient and cost-effective, by monitoring on/off events, sending quick alarms and instant notifications via email, text, or phone calls, in case of shut down, to resolve problems, at the same time reducing the requirement for humans. For oil wells with low production, this is a major benefit, as it ensures that the running costs do not outgrow the revenue being generated from oil supply.

The onshore bifurcation held the larger revenue share, by application, in 2016. This can be attributed to the fact that a larger number of the aging mature wells are on the land compared to in the sea, which is why the usage of pump jacks will be higher in onshore oil drilling.

The vertical well bifurcation is expected to exhibit faster pump jack market growth, by well type, during the forecast period, in terms of value. This can be ascribed to the fact that pump jacks are used in a majority of onshore oil wells and they were particularly developed for vertical onshore wells.

North America was the largest pump jack market during the historical period (2013–2016), and it is expected to maintain the trend during the forecast period. This can be mainly attributed to the presence of established players, a high number of mature oilfields, and increase in the age of oilfields.

Besides, North America is expected to exhibit the fastest growth during the forecast period as well, mainly on account of the increasing number of mature wells and demand for energy.

Considering the future industry scenario, the U.S. is expected to lead the North American pump jack market, generating revenue worth $2,200.5 million in 2023. 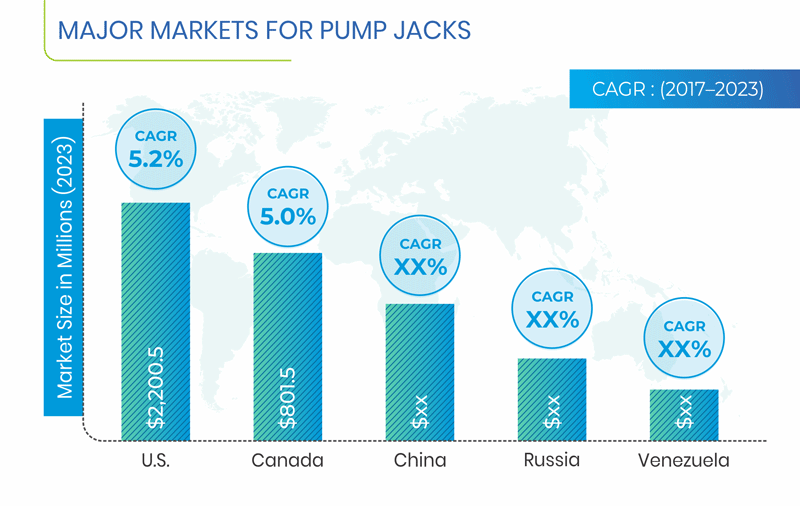 In recent years, major players in the global pump jack market have taken several strategic measures, such as product launches and geographical expansions, to gain a competitive edge in the industry. For instance, in November 2016, Schlumberger entered into an agreement with NOW Inc., to give the latter the exclusive rights to distribute REDA HPS pumps and certain related parts, in 15 states across the U.S. Schlumberger will provide technical support for these products, as part of the collaboration.

Based on Well Type