The global protein A resin market generated an estimated value of $486.4 million in 2019, which is projected to reach $1,020.7 million by 2030, progressing at a CAGR of 7.0% during 2019–2030. Based on source, recombinant is expected to be the larger and faster-growing category during the forecast period. This can be mainly attributed to the fact that recombinant protein A ligands are the manipulated forms of protein that are used to generate large quantities of protein A resins.

Collaboration and partnership activities for the development of advanced next-generation protein A resins, and launch of new products are the key trends observed in the protein A resin market. For instance, in October 2019, Bio-Works Technologies AB has signed a distribution agreement with Hong Kong based Gene Company Ltd. According to the agreement, the latter company would import, store, distribute, market, promote, and sell Bio-Works Technologies AB’s products in China.

Increasing participation of public and private research organizations in protein research is boosting the growth of the protein A resin market, globally. Historically, the development of proteins and monoclonal antibodies as therapeutic agents was avoided by pharmaceutical companies, due to their size, low stability, poor delivery, and rate of degradation. However, the resurgence is taking place in the development of proteins and monoclonal antibodies as therapeutics for addressing unmet needs in various therapeutic areas, including cardiovascular diseases, metabolic diseases, infectious diseases, and oncology. This has led to increased attention on utilizing proteins that mimic the function of mediators involved in various pathologic processes. 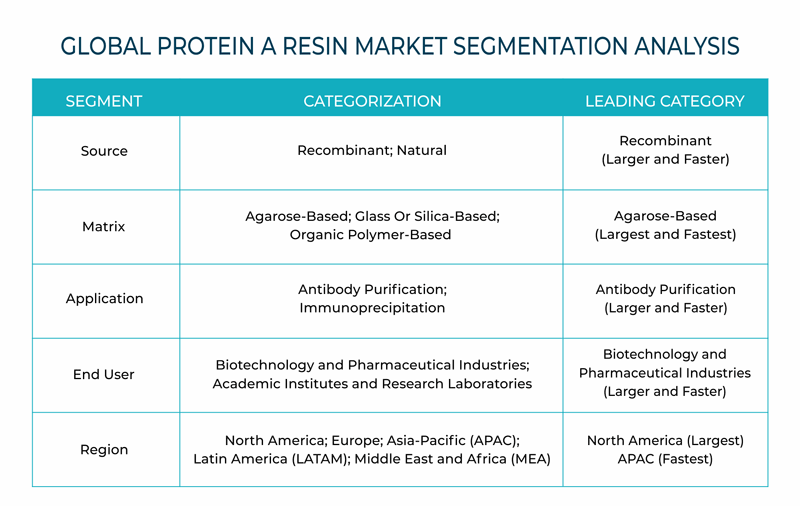 Globally, North America is expected to account for the largest share in the protein A resin market by 2030, followed by Europe. Together, North America and Europe are expected to account for 70.9% market share in 2030. This can be mainly attributed to the increasing demand for protein-based therapeutics for treating chronic conditions and the rising number of the Food and Drug Administration (FDA) approved products in these regions. Additionally, presence of large-scale drug manufacturers, such as Gilead Sciences Inc. and Bayer AG, and the growing biopharma research industry are expected to contribute to the growth of market in the coming future.

Other regions, such as APAC, LATAM, and MEA, also hold considerable share in the protein A resin market, on account of increasing number of protein research activities, growing geriatric population, and rising demand for monoclonal antibodies for the treatment of chronic diseases.

In recent years, major players operating in the global protein A resin market have adopted acquisition as a key strategy to increase their protein A resin related product portfolio. For instance, in April 2016, Repligen Corporation acquired Atoll GmBH, a German based company, to expand its pre-packed column chromatography portfolio in high throughput process development screening. The acquisition was made in $9.1 million in cash and 538,700 shares of Repligen common stock.