Among all regions, the APAC protein A resin market is expected to witness the fastest growth during the forecast period. Factors driving the growth of the market include surging burden of chronic diseases, rising investment and funding for protein-based research, and growing geriatric population. 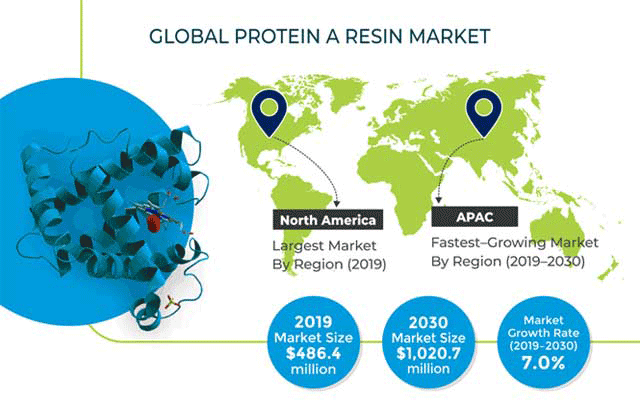 Dynamics of Protein A Resin Market

In the protein A resin market, adoption of collaboration and partnership strategies by several players for the development of advanced next-generation protein A resins, and launch of new products are the key trends observed in the market. For instance, in June 2018, Repligen Corporation entered into an agreement with Purolite Corporation. As per the agreement, Repligen Corporation supplies its next-generation protein A ligand, NGL-Impact A, which is commercialized by Purolite Corporation by using its novel Praesto agarose jetting base bead technology.

Increasing investment and funding for protein-based research is the one of the primary factors driving the protein A resin market. Several public and private organizations are funding protein-based research programs to improve therapeutic approaches. For instance, the National Institute of Health (NIH), a medical research center based in the U.S., invests nearly $32.3 million annually in medical research by offering grants to projects and programs in the life sciences and medical fields. Besides, major key players in the biotechnology and pharmaceutical industries, such as Thermo Fisher Scientific Inc. and Merck & Co. Inc., are investing on R&D in the field of protein-based research for drug discovery and development. 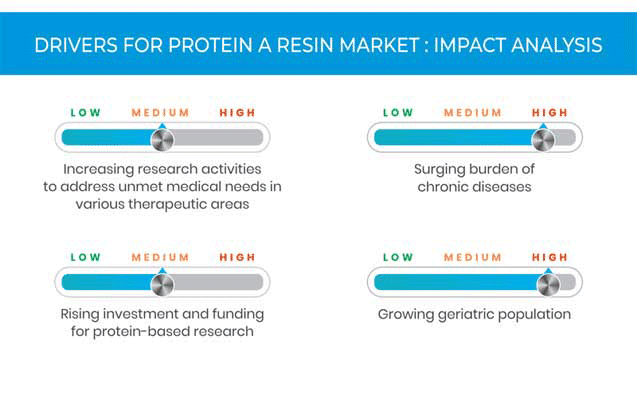 According to the United Nations Population Fund, people aged 60 years or more account for 12.3% of the global population, which is projected to rise to almost 22% by 2050. Besides, the increasing prevalence of chronic diseases would raise the demand for novel therapeutic candidates for disease management. Since APAC accounts for around 60% of the global population, the region offers ample scope for the development of therapeutic agents derived from protein A resins.

The recombinant source category is expected to grow at faster pace, with a CAGR of 7.5%, during 2019–2030. This can be ascribed to the fact that recombinant protein A resins are used in large quantity in the downstream processing of monoclonal antibody.

Agarose-based resins contain ionic and hydrophobic groups that interact with the compound of interest. In contrast, silica-based resins have silanol groups that require coatings before use in the size exclusion chromatography process. Hence, many antibody manufacturers prefer using agarose-based resins, thereby making these the largest shareholder in the matrix segment.

The antibody purification application category held larger market share in 2019. This is primarily due to high production and increasing demand for antibodies, particularly monoclonal antibody for therapeutic application.

Biotechnology and pharmaceutical industries, as an end-user category, in the protein A resin market are expected to witness faster growth during the forecast period. This can be imputed to the fact that these industries use a large amount of protein A resins in the production process of antibody.

Globally, North America held the largest share, of 37.4%, in the protein A resin market in 2019. This is mainly attributed to the increasing demand for protein-based therapeutics for treating chronic conditions and rising number of the Food and Drug Administration (FDA) approved biopharmaceuticals in the region. Moreover, the presence of large-scale drug manufacturers, such as Gilead Sciences Inc. and Bayer AG, and the growing biopharma research industry are playing pivotal role in the growth of the market. The U.S. is expected to lead the North American market, owing to the increasing prevalence of chronic diseases, presence of established players, and rising number of protein-related research activities.

On the other hand, the APAC protein A resin market is projected to witness the fastest growth, with a CAGR of 7.8% during 2019–2030. This can be attributed to the increasing use of protein A resins in drug discovery, advancements in technologies, and rising number of life sciences research activities in the region. In 2019, Japan held the largest share in the APAC market, owing to the presence of well-established pharmaceutical industry and increasing R&D spending for the development of innovative and advanced drugs. Also, presence of pharmaceutical companies, such as Daiichi Sankyo Co. Ltd., Takeda Pharmaceutical Co. Ltd., Astellas Pharma Inc., and Otsuka Holdings Co. Ltd., is supporting the growth of the market in the country. 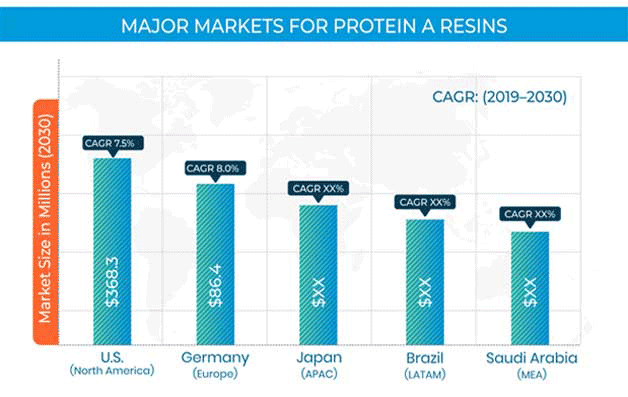 The protein A resin market is consolidated in nature, due to the presence of giant players, which are extensively involved in the development of protein A resins. These include GE Healthcare, Merck KGaA, Thermo Fisher Scientific Inc., Purolite Corporation, Tosoh Corporation, Novasep Holding SAS, and Repligen Corporation. Some of the other players operating in the market are Bio-Works Technologies AB, Amikozen Co. Ltd., Bio-Rad Laboratories Inc., Expedeon AG, GenScript Biotech Corporation, and Kaneka Corporation.

In recent years, major players operating in the global protein A resin market have actively engaged in acquisition to gain a competitive edge. For instance, in February 2019, General Electric Company signed an agreement with Danaher Corporation to sell its biopharma business for $21.4 billion.

The Protein A Resin Market report offers comprehensive market segmentation analysis along with market estimation for the period 2014–2030.

Frequently Asked Questions About This Report
What will be the growth rate of the global protein A resin market during 2019–2030?+

What will be the value of the protein a resin industry in the near future?+

What is the major trend currently being witnessed in the protein A resin market?+

Partnerships and collaborations among companies are the biggest trend currently being observed in the protein A resin market.

Why did the recombinant source category record the higher revenue in the protein A resin industry in 2019?+

The recombinant category, under the source segment, recorded the higher revenue in the protein A resin industry in 2019 because of the high usage of recombinant proteins in antibody purification.

Which region will witness the fastest protein A resin market growth during 2019–2030?+

The protein A resin market will register the highest growth rate in APAC from 2019 to 2030.