The global power rental market was valued at $9,167.6 million in 2017, which is projected to reach $16,855.5 million by 2023, at a CAGR of 10.3% during the forecast period (2018–2023). The diesel generators category dominated the market in 2017, in terms of revenue, on the basis of fuel type. This is majorly attributable to the low cost of diesel generators, along with their low maintenance requirement.

The gas generators category is projected to witness the fastest growth during the forecast period, owing to the increasing preference of such equipment, particularly in the North American and European regions.

In recent times, the demand for power has witnessed an increase, particularly in developing nations, such as China, India, Thailand, Qatar, and Brazil. With the rapid industrialization in these countries, along with the expansion of the construction sector, the market for power rental systems is expected to prosper in the coming years. In addition, several power rental companies are particularly targeting emerging economies, owing to their untapped power rental market potential. 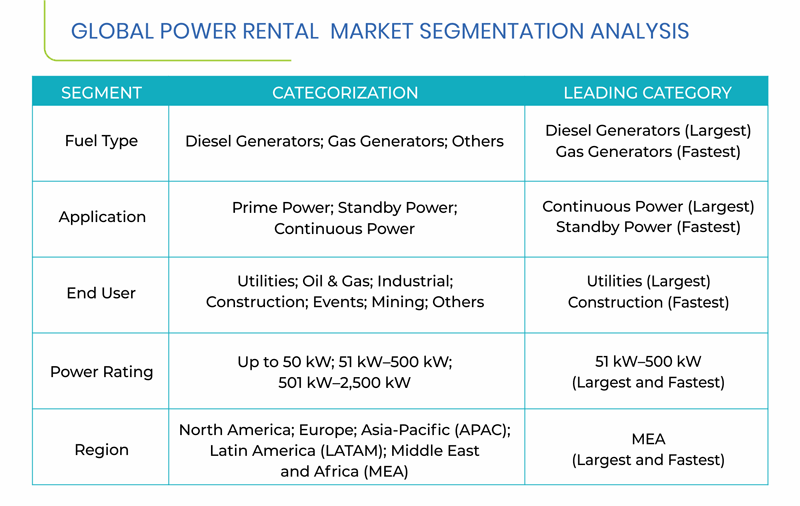 Together, MEA and North America are expected to account for over 53.0% share in the power rental market by 2023. This can be mainly attributed to the growing demand for rented power owing to the ongoing economic development and industrialization. In addition, end users such as the oil and gas, mining, industrial, and events sectors have a high requirement for rental electricity, for functioning in remote areas and maintaining continuous operations during power outage, owing to which the power rental market in these regions is expected to grow.

The power rental market is fragmented in nature, with the leading players accounting for just over 30% of the share. Some of the prominent players in the market include Caterpillar Inc., Ashtead Group PLC, APR Energy, Al Faris Group, United Rentals Inc., Cummins Inc., Aggreko PLC, Quippo Infrastructure Equipment Limited, and Atlas Copco AB.

Companies in the power rental market are entering into strategic agreements, along with product launches, in order to gain a larger share. For instance, in October 2017, United Rentals Inc. completed the acquisition of NES Rentals Holdings for $965 million, in order to increase its production capabilities and geographical presence, mainly in southern geographies of U.S. such as the East Coast, Gulf States, and Midwest.