The portable category is projected to demonstrate the fastest growth, in the planar solid oxide fuel cell market, during the forecast period. Portable fuel cells are designed to charge products, which can be moved from one place to another, such as auxiliary power units (APU). These are suitable for military applications, such as portable soldier-borne power, skid-mounted generators, as well as torches, battery chargers, and cameras.

The rising development of alternative technologies for power generation is one of the key trends being observed in the planar solid oxide fuel cell market. Governments across the globe are concerned regarding the depletion of conventional resources for power generation. In order to overcome this situation, countries including the U.S., Germany, Japan, South Korea, and China are supporting the development of the planar SOFC technology with project funding and research activities. In addition, the projected increase in the deployment of fuel-cell electric vehicles (FCEV) by large automobile manufacturers is expected to create focus on the development of hydrogen-fueling infrastructure, thereby providing a boost to the market in the coming years.

Countries across the world are shifting from traditional, non-renewable sources toward renewable sources of energy, in order to reduce their dependency on fossil fuels and keep the environment clean. The regulatory bodies of countries including the U.S., Japan, and Germany have framed stringent regulations, in order to cut down on the harmful emissions from a number of industries, such as power generation, chemicals, and automotive. Planar SOFCs offer several advantages, including high efficiency, fuel adaptability, and extremely low levels of nitrogen oxide (NOx) and sulfur oxide (Sox) emissions. Owing to such factors, the demand for such products is projected to increase in the coming years, thereby helping the planar solid oxide fuel cell market grow. 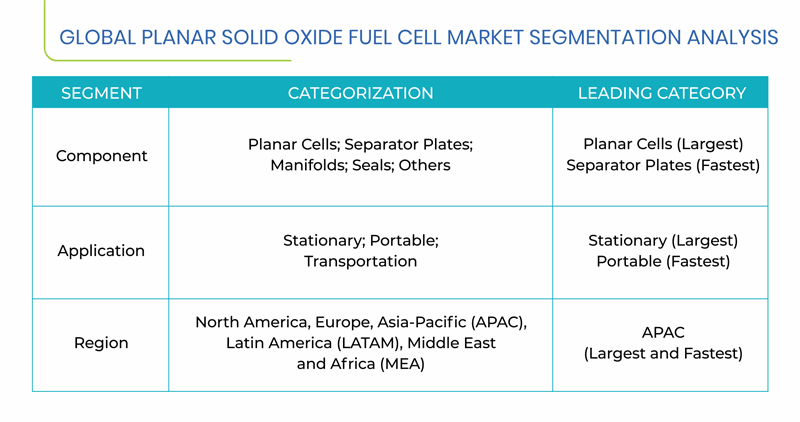 Planar cells accounted for the largest planar solid oxide fuel cell market share in 2015, on the basis of component, and the trend is likely to continue during the forecast period. Cells serve as the primary component in a planar SOFC, and they are used in a high numbers, owing to which these account for the dominating share in the market.

The stationary category led the global planar solid oxide fuel cell market, with a 73.1% share, in 2015, based on application. In addition, the market category is expected to grow considerably during the forecast period. This can be attributed to the large-scale usage of planar SOFCs at for supplying backup power at remote locations, with a lack of developed power infrastructure.

APAC held the largest share in the planar solid oxide fuel cell market in 2015. This can be ascribed to the increase in the installation of planar SOFCs in many countries, including Japan, South Korea, and China. South Korea is one of the major markets for such products in the region, owing to the rapid growth in the adoption of SOFC systems.

In order to garner a larger share in the global planar solid oxide fuel cell market, the players involved are entering into several strategic developments. For instance, in November 2016, Ballard Power Systems entered into a long-term agreement with a Poland-based original equipment manufacturer (OEM) company, Solaris Bus & Coach, to support the deployment of the latter’s fuel-cell buses in Europe. Under the agreement, Ballard would sell and supply fuel cell modules to the OEM company, which would be deployed as a range extender in a Solaris Trollino-model low-floor trolley bus. The delivery of the initial order for 10 FCveloCity-HD fuel cell modules is expected to start in 2017.