Geographically, Asia Pacific (APAC) held the largest market share, of 40.4%, in 2015. This is majorly attributed to the large-scale installation of such fuel cells for power backup. Countries including Japan and South Korea have showcased considerable industry growth in recent times, owing to the provision of subsidies for domestic manufacturing of fuel cells. In addition, a significant demand from the automotive industry in the region is expected to propel the sale of planar SOFCs, thereby boosting the planar solid oxide fuel cell market during the forecast period. 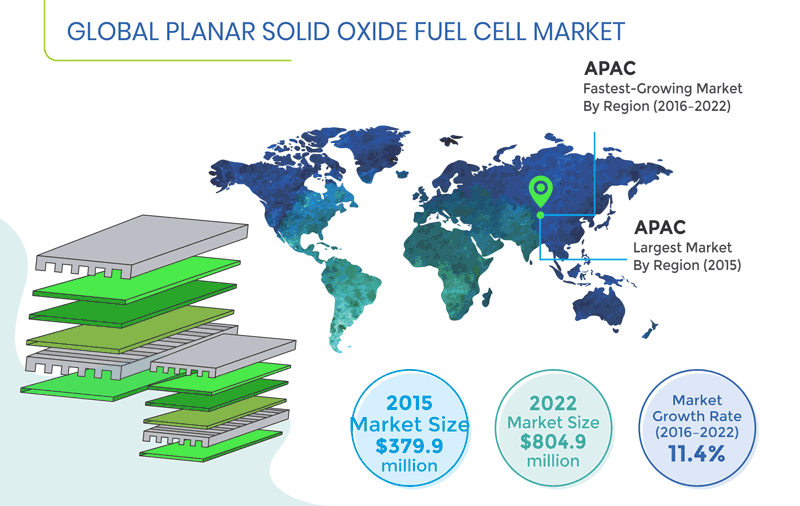 The increasing stringency of government regulations, coupled with a rise in the energy prices, is one of the key trends being observed in the planar solid oxide fuel cell market. With the surging awareness on alternative energy sources, combustion-based electricity generators are being replaced by renewable energy systems such as solar panels, which display a higher efficiency in energy conversion. In addition, the fuel cells used in these devices do not cause any harmful emissions, owing to which these are suitable for applications in transportation, stationary/backup, and portable power applications.

With the increasing environmental concerns, governments across the globe are aiming to reduce the consumption of non-renewable energy sources. In an effort to achieve this this, stringent regulations for limiting the usage of non-renewable energy sources are being formed, which are leading to the development and adoption of alternative methods to create electricity. The fuel cell technology shows high efficiency in energy generation, owing to which it has a huge application base in stationary power generation. Therefore, such factors are expected to propel the planar solid oxide fuel cell market in the years to come. 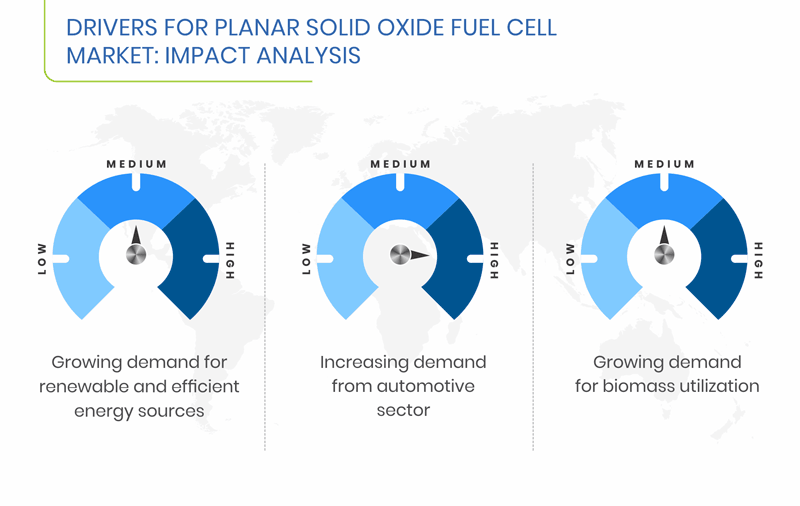 Moreover, the increasing application base of such products in the oil and gas industry offers lucrative opportunities for growth to the market. For instance, the natural gas extracted on-site can be readily used as a fuel for direct fuel cell (DFC) power plants. With this, the power generated at the DFC power plants can be utilized to support the extraction process. In addition, DFC power plants serve as a clean source of energy and can provide power which can be injected underground for enhanced oil recovery. Therefore, the global solid oxide fuel cell market has numerous opportunities for growth in the coming years.

The planar cells category held the largest market share, of 35.1%, in 2015, on the basis of component, and it is projected to reach $287.1 million by 2022, demonstrating a considerable CAGR during the forecast period. Planar cells serve as the most vital component in the manufacturing of a planar solid oxide fuel cells, owing to which this market category is expected to account for the largest share in 2022.

The stationary category dominated the market in 2015, based on application, and the trend is likely to continue during the forecast period. Stationary power includes any application in which the fuel cells are operated at a fixed location, such as large-scale systems for prime power, backup power or combined heat and power and small systems for micro-combined heat and power (m-CHP) for residential and commercial operations. Fuel cells provide reliable backup power for telecommunications networks, which, in many cases, are located in remote areas, without developed power infrastructure, owing to which the demand for stationary SOFCs is expected to increase.

Geographically, APAC accounted for the largest market share in 2015. Further, the market in the region is expected to witness significant growth during the forecast period, owing to the increasing demand for the product from the automotive industry, in countries including India, Indonesia, and Thailand. In addition to this, the expansion of several other end-use industries in the developing nations of the region is expected to augment the growth of the regional market, at the highest CAGR during the forecast period. 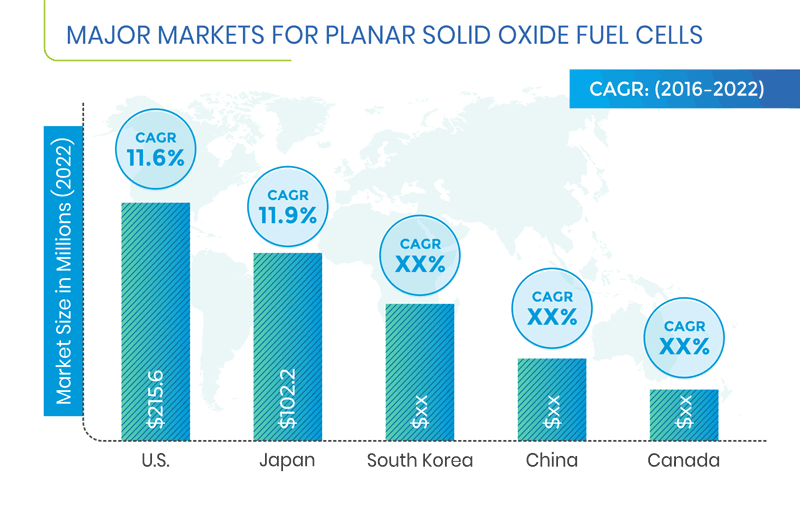 Lately, several players in the planar solid oxide fuel cell market have taken an array of strategic measures, in order to gain a larger share. For instance, in February, 2017, Ballard Power Systems signed a deal worth $25 million with its strategic partner, Zhongshan Broad-Ocean Motor Co. Ltd., for the assembly and supply of FCveloCity fuel cell engines in China, to address the fast-growing fuel cell vehicle markets.