The methionine hydroxy analog (MHA) category is expected to witness the fastest growth during the forecast period (2018–2023), among all types. This can be attributed to its properties, such as highly digestible and capable of increasing feed intake, which result in faster growth of young poultry and increased productivity of adult poultry.

Key trend witnessed in the methionine market is the emergence of bio-methionine. Generally, methionine is derived from petrochemical sources, where raw materials used are hard-to-handle and hazardous in nature. Biochemical routes are being researched to obtain methionine. For instance, CJ Cheiljedang Bio and Arkema Group entered into a joint venture, to initiate methionine production from essential raw materials using innovative industrial process, owing to their environment-friendly nature and sustainability benefits over synthetic materials. 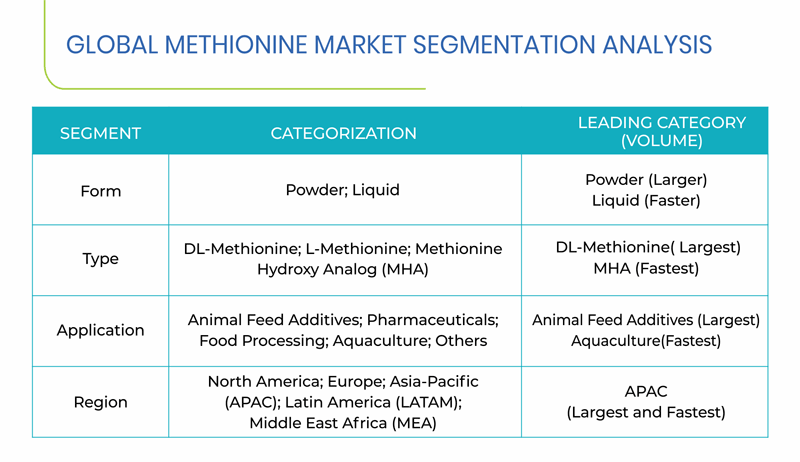 The DL-methionine category held the largest volume share in 2017 in the methionine market. This is ascribed to its high demand as nutritional and dietary supplement from the animal husbandry and food processing sectors.

The aquaculture category is expected to exhibit fastest growth during the forecast period. This can be ascribed to the high demand for aquatic organisms for consumption, which are one of the best sources of animal proteins.

Together, APAC and Europe are expected to account for over 60% revenue in the methionine market by 2023. This can be mainly attributed to the presence of established players, modernization of the animal husbandry sector, and high-volume production of pork, poultry, and livestock in these regions.

North America, LATAM, and MEA, also hold considerable shares in the methionine market, on account of the growing population, rise in methionine manufacturing units, and growth of the animal husbandry industry.

The U.S. is expected to lead the North American methionine market, generating revenue of over $1,483.2 million in 2023. The market in the country is mainly driven by the presence of key players, such as Novus International Inc. and Archer Daniels Midland (ADM) Company.

Brazil is the fastest-growing market for methionine in the LATAM region. Growing population, rise in methionine manufacturing units, and increasing demand for meat are the major factors contributing to the growth of the market in the country.

The global methionine market is consolidated in nature, characterized by the presence of major players, such as Evonik Industries AG Corporation, Bluestar Adisseo, and Novus International Inc., which are engaged in the development and commercialization of methionine.